Growth in large customers helped fuel an extraordinary run for customer-service platform Zendesk (NYSE:ZEN) in 2017, driving shares up about 60%. Momentum for the stock has continued into 2018, with shares already up more than 14%.

Can Zendesk continue impressing investors with the bar so high? Here's an overview of three areas to watch, ahead of the company's quarterly results next week. 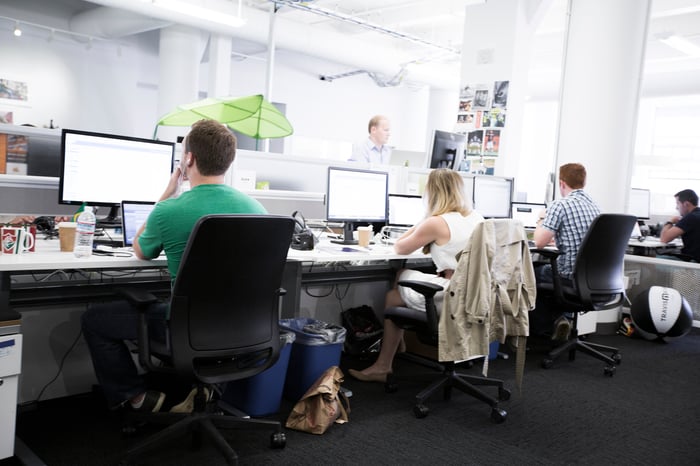 Revenue growth in Zendesk's third quarter was $112.8 million, up 40% year over year. Driven by a 31% year-over-year increase in paid customer accounts and a sharp jump in enterprise-class deals, this revenue easily beat the consensus analyst estimate for the quarter. Notably, Zendesk's third-quarter year-over-year revenue growth of 40% marked a meaningful acceleration compared to its second-quarter growth of 36%.

In its third-quarter shareholder letter, management said it expects revenue between $118 million and $120 million, representing year-over-year growth of 33% to 35%. With Zendesk's revenue usually exceeding its guidance range, investors should look for fourth-quarter revenue of $120 million or more.

Zendesk is well on its way to reporting positive free cash flow for the full year already. For the trailing nine months ending Sept. 30, Zendesk's free cash flow was $6.2 million, up from negative free cash flow of $12.8 million in the year-ago period. Nevertheless, this doesn't undermine the importance of free cash flow in Q4. Investors should look for this important trend to continue during the quarter.

Zendesk has credited its re-acceleration in revenue growth during fiscal 2017 largely to its increasing number of large organizations using its platform. Zendesk has seen impressive growth in large customers, with the number of its third-quarter contracts with an annual value of $50,000 or more up over 50% compared to the year-ago quarter. In addition, Zendesk said the average contract size of its customers with an annual value above $50,000 was up 40% compared to the same quarter in 2016.

Another way to view Zendesk's growth in large customers is the percentage of its support monthly recurring revenue (MRR) that was generated by customers with 100 or more support agents. In Zendesk's third quarter of 2017, this important metric grew to an all-time high of 37%, up from 35% in the second quarter of 2017 and 33% in the year-ago quarter. Investors should look for strong growth in Zendesk's large customers to persist.