Is the Amazon.com, Inc. (NASDAQ:AMZN) juggernaut is destined to run over every industry that Jeff Bezos decides is next in line? That's how many market commentators see it. Whenever companies in an industry where Amazon is expanding operations start facing challenges, the quick conclusion is that Amazon is eating their lunch.

I'm going to take a brief look at three industries and see if the case is watertight. Are package-delivery companies like FedEx Corporation (NYSE:FDX), industrial supply companies like MSC Industrial Direct Co., Inc (NYSE:MSM) and auto-parts retailers like AutoZone, Inc. (NYSE:AZO) really set to be run over? 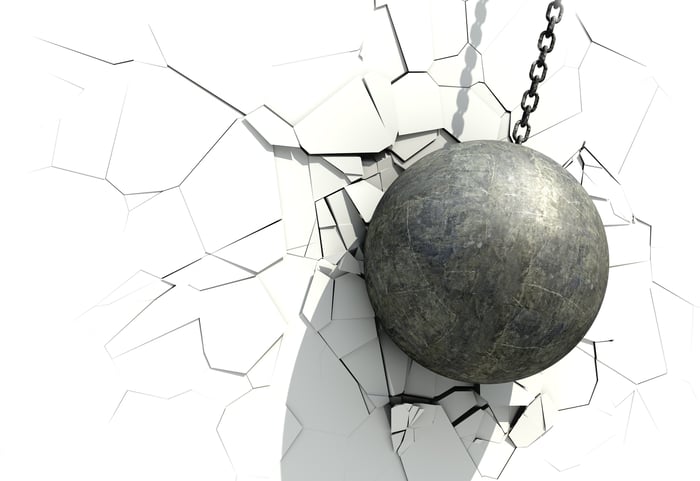 The news that Amazon was testing its own delivery service, a pilot service called "Seller Flex," certainly caused a dip in the stock prices of Fed Ex and United Parcel Service (NYSE:UPS) when it came out in October. However, the impact wasn't lasting, and I think the market would be right to ignore the "threat" from Amazon.

There are three key reasons. First, FedEx and UPS run highly complex global networks, and it's simply unfeasible for Amazon to replicate them. Second, Amazon's primary focus is supporting its e-commerce operations. While it might be optimal for Amazon to get closer to end consumers from its distribution centers by handling its own deliveries, that doesn't mean Amazon wants to compete with FedEx and UPS in terms of global delivery.

Indeed, as you can see below, price increases taken in 2017 (note revenue per piece) have been accompanied by solid volume growth: 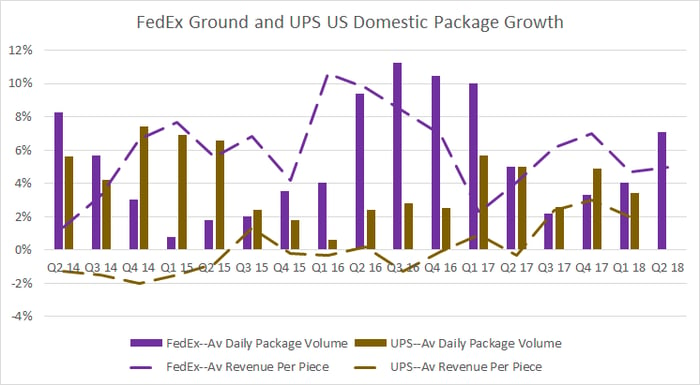 In other words, there is little to suggest either company is suffering any kind of sales pressure from Amazon, and given that retail e-commerce sales in North America continue to rise at a 15% clip, there's plenty of growth to go around.

The jury is rather more undecided on this industry. It's well known that Amazon has made supply agreements with auto-parts suppliers in order to muscle in on the do-it-yourself (DIY) market. Furthermore, there's little doubt that if consumers and professionals can buy engine oil, spark plugs, catalytic converters, or faulty oxygen sensors at cheaper prices online, they will.

Throw in the fact that all the major auto-parts retailers have suffered disappointing organic sales growth in 2017, and the case for Amazon being a major disrupter to the industry looks solid.

However, there are reasons for the slowdown in sales growth: a combination of unfavorable weather, rising gas prices (which reduce miles driven), and unfavorable car demographics. It's not specifically an Amazon problem.

Moreover, the DIY market has been seen as more at risk from Amazon than the do-it-for-me (DIFM) market. Yet AutoZone, a company with around 80% of its sales to DIY consumers, has been doing relatively better than General Parts Company's (NYSE:GPC) automotive group, which has around 70% to 75% of its sales in the DIFM market. If Amazon was the main cause of the slowdown, then it should be the other way around -- the DIY-focused company (AutoZone) would be the laggard. This suggests it's not really about Amazon, but more an issue of currently less favorable car demographics for DIFM sales. 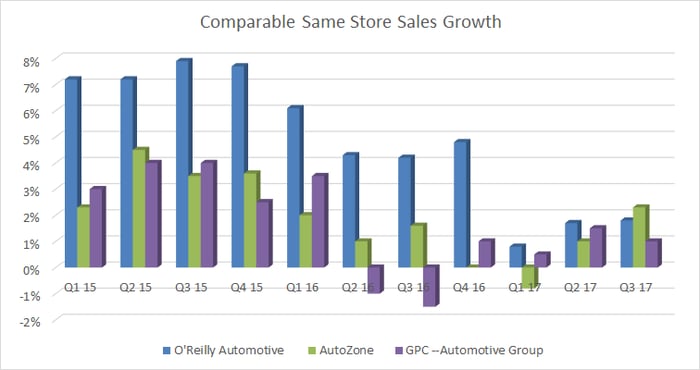 In contrast to much of the industrial sector, industrial suppliers like MSC Industrial and W.W. Grainger, Inc. (NYSE:GWW) have endured a tough year -- both stocks are down by mid-single digits over the last 12 months. It wasn't supposed to be like this. When U.S. industrial production growth turned positive again at the start of 2017, investors hoped that industrial supply companies would see a typical combination of fast-growing sales and margin expansion.

The good news is the sales expansion happened, but significant margin expansion didn't. It's hard to think that Amazon's move into the sector didn't have some sort of impact. Indeed, Grainger's strategic price initiatives -- often a nice way to describe price-cutting -- have resulted in good volume growth, which analysts expect will continue in 2018. Moreover, Grainger's digital marketing initiatives are seen as a response to the inevitable rise of online procurement in the industry.

As you can see below, MSC Industrial and Grainger simply haven't had the kind of margin expansion that usually accompanies a recovery in U.S. industrial production:

Investors in the sector will sleep more soundly if MSC Industrial achieves its aim of increasing prices in its second quarter -- something to look out for.

Will Amazon disrupt these industries?

FedEx and UPS look relatively immune from Amazon's threat, and it's not clear yet if auto-parts retailers like DIY-focused AutoZone are suffering significantly from the e-commerce giant's encroachment.

However, with the industrial supply companies, there appears to be strong evidence that Amazon is having an effect. Investors should watch closely to see how pricing and margin develop at the leading players like MSC Industrial Direct and W.W. Grainger.