Here are a few things investors will need to know about the rise of the machines.

Artificial intelligence (AI) is getting a lot of attention from investors these days and with good reason. It's a technology with the potential to transform everything from transportation to cloud computing.

Many companies are betting that AI will influence not just their products and services, but nearly every aspect of their business. Read on to discover nine things you may not have to know about this burgeoning technology. 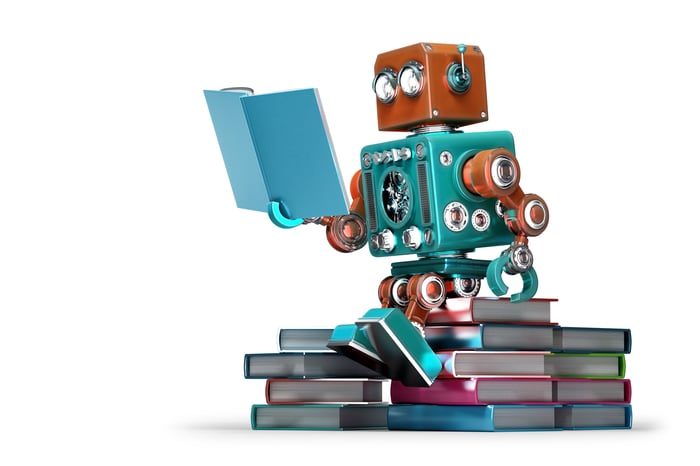 Artificial intelligence is often used as a catch-all to describe computer systems that can learn. But there are more specific designations like machine learning, deep learning, and deep inference that describe the details of how those computers are learning. For example, the GPU chipmaker NVIDIA Corp. ( NVDA 2.20% ) defines machine learning as "the practice of using algorithms to parse data, learn from it, and then make a determination or prediction about something in the world."

2. The artificial intelligence market will be worth a lot. Like, really a lot.

A PwC report estimates that AI will contribute $15.7 trillion to the global economy by 2030. AI will make products and services better, and it's expected to boost North America's GDP by 14% by that year.

3. The $127 billion autonomous vehicle market is being driven by AI.

That's how much the self-driving car market is expected to be worth worldwide by 2027 -- and AI technology is crucial for making them a reality. NVIDIA created its own computer -- the Drive PX Pegasus -- specifically for driverless cars and powered by the company's AI and GPUs. It starts shipping this year, and 25 automakers and tech companies have already placed orders.

4. AI is already making the connected home much better.

Amazon.com's ( AMZN -0.18% ) Echo line, powered by its AI personal assistant, Alexa, holds 70% of the smart speaker market right now and could add $10 billion the company's top line by 2020. Additionally, Alphabet ( GOOG 1.52% ) ( GOOGL 1.36% ) is using its own AI, called Google Assistant, to power its own competing line, and the smart speaker rivalry is only going to grow.

5. Some products you buy are being suggested to you by artificial intelligence.

Amazon CEO Jeff Bezos told investors last year that the company's machine learning systems are being used to recommend products to customers on its e-commerce platform. Beyond that, AI help's it determine which deals to offer and when, and influences many aspects of the business. Bezos recommended that investors watch this space.

Alphabet has created its own artificial intelligence processor, called the Tensor Processing Unit (TPU), specifically designed to make its advertising, search, Gmail, Google Photos, and other services smarter. The tech giant is also using the TPUs to enhance its cloud computing servers with the goal of grabbing a bigger piece of that $411 billion market.

7. Some tech leaders are legitimately worried about AI.

Tesla ( TSLA -0.95% ) CEO Elon Musk -- who's no stranger to advanced technology -- has warned on multiple occasions that artificial intelligence could eventually be dangerous to people -- and to humanity as a whole. He recommends some regulation around the technology and specifically wants a ban on any type of autonomous weaponry. Considering the fact that some governments are already working on AI controlled weapons, his request sounds reasonable.

Hawking is one of many deep thinkers who believe AI systems will eliminate many jobs, and not create enough to replace them. Specifically, he said, "The automation of factories has already decimated jobs in traditional manufacturing, and the rise of artificial intelligence is likely to extend this job destruction deep into the middle classes, with only the most caring, creative or supervisory roles remaining." He's far from alone in his views. PwC says that 38% of U.S. jobs will be vulnerable to AI over the next 15 years.

Some researchers expect artificial intelligence systems to be only one-tenth as smart as a human by 2035. But things may start to get a little awkward around 2060 when AI could start performing nearly all the tasks humans do -- and doing them much better.

Artificial intelligence has so much potential across so many different industries, it can be hard for an investor looking to profit from it to know where to start. As a first step, check out these AI stocks you don't have to babysit. Just don't forget to take the long view when it comes to any AI investments. Companies like NVIDIA and Amazon may be benefiting from the technology right now, but it may take a while for others to reap the benefits from their early AI investments -- so be patient.