With shares down around 3% as of this writing, let's take a closer look at what drove Textron over the past few months, as well as what investors can expect in the year ahead. 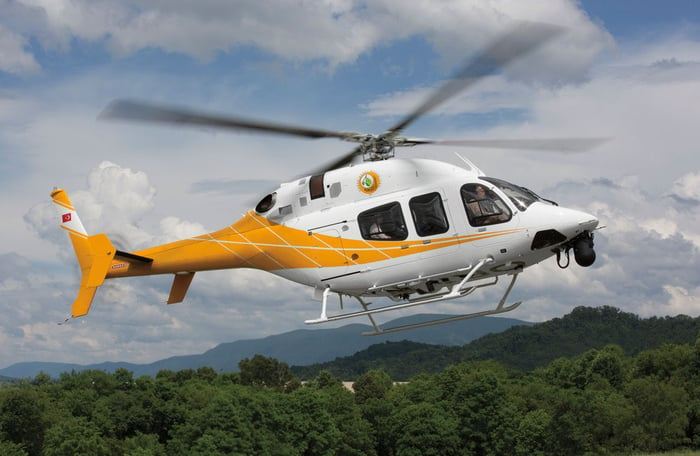 To summarize the year, we continued to execute our plan for growth through strategic acquisitions and new product innovation to create long term shareholder value. At Industrial, the integration of Arctic Cat continues and reflects our strategy of acquisitions that complement our core businesses and product lines. Equally important is the need to continue to innovate through new product introductions, which was evident throughout Textron's specialized vehicles.

Donnelly added that, after successfully navigating a "challenging year with uncertainties surrounding many of our end markets," Textron is now enjoying improving end markets and stands "well positioned coming into 2018."

Textron expects full-year 2018 revenue to increase 3% year over year to $14.6 billion, assuming growth from Aviation and Industrial offsets lower sales from Bell and Textron Systems. On the bottom line, margins should improve at Aviation, Industrial, and Systems, while remaining roughly flat at Bell. That should translate to earnings per share from continuing operations of $2.95 to $3.15, or year-over-year growth of 24.5% at the midpoint. Meanwhile, manufacturing cash flow before pension contributions should be in the range of $700 million to $800 million, with a "substantial portion" to be dedicated to capital returns.

"Our outlook reflects the continuation of our strategy around growth through new product investments and acquisitions to drive increases in long-term shareholder value," Donnelly concluded. "In 2018, we expect these investments to drive increasing organic sales along with margin expansion and strong cash generation."

All things considered, this was a solid quarter from Textron that arrived squarely within the company's expectations, followed by an encouraging outlook that calls for sustained earnings growth despite continued modest top-line gains. With shares still up more than 20% over the past year, I think Textron investors should be more than pleased with the company's position today.