Bolt sales were down big, but it was still a good showing for GM. Here's why.

General Motors (GM 1.70%) said it sold 1,177 Chevrolet Bolt EVs in the United States in January, an increase of 1.3% from a year ago -- but down sharply from its sales total in December.

January marks the first month-over-month drop in U.S. sales of the bolt since February of 2017. Bolt sales had grown in every month from February through December.

Data source: General Motors. Chart shows U.S. sales of the Chevrolet Bolt EV for every month since its launch.

Why did sales drop so much in January? Part of the story probably has to do with the season: Electric cars are a tougher sell in the wintertime. (Tesla's (TSLA 1.66%) sales dropped in January, too -- more on that below.) But GM's incentives may also be playing a role.

GM has been offering generous incentives on 2017-model-year Bolts since last fall: Just over $2,000 in discounts and 3.9% financing for those who choose to buy instead of leasing. Those discounts are in addition to federal and state tax credits available to buyers of electric vehicles, which can exceed $10,000 in some areas.

GM's incentives likely helped give Bolt sales a boost as 2017 came to a close. But at this point, most 2017-model-year Bolts have been sold -- and the discounts and cheap financing aren't available on 2018 models. 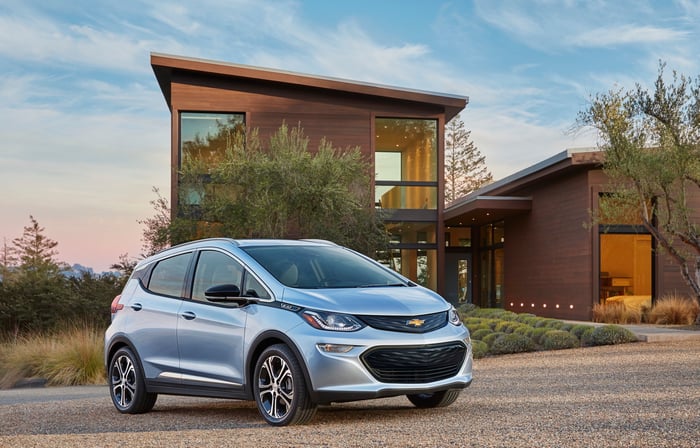 As I mentioned above, the Bolt was far from the only electric vehicle to see sales slump from December to January. In fact, if InsideEV's estimates for Tesla's sales are accurate (and they're usually close), the Bolt was still the second-best-selling battery-electric vehicle in the U.S. last month behind Tesla's Model 3.

Data sources: General Motors, Volkswagen, Nissan, and InsideEVs. All numbers are U.S. sales only. Figures for Tesla are InsideEVs's estimates.

Will Bolt sales pick up as the year goes on?

It's very likely they will. I suspect Bolt sales will start moving back up once dealers have full supplies of 2018 models -- and as soon as winter starts to turn to spring.

That said, there's more competition on the way that could make for an interesting sales battle in 2018. For starters, Tesla is slowly but surely ramping up production of its Model 3. There's also an all-new Nissan Leaf that has just begun arriving at U.S. dealers and that could prove to be a serious competitor to the Bolt in time. While the new Leaf's range falls short of the Bolt's, so does its price.

Still, the little Bolt has already outperformed some analysts' expectations. As interest in electric vehicles continues to grow -- and as GM begins marketing the Bolt to fleet customers in earnest -- chances seem good that Bolt sales will once again begin trending upward as 2018 unfolds.