Please ensure Javascript is enabled for purposes of website accessibility
Log In Help Join The Motley Fool
Free Article Join Over 1 Million Premium Members And Get More In-Depth Stock Guidance and Research
By Dan Caplinger - Feb 2, 2018 at 7:29AM

Deckers Outdoor (DECK -4.18%) has gone through a lot of turmoil recently. The maker of popular Ugg boots has been the target of activist investors seeking to have the company squeeze more shareholder value from its operations, and Deckers has gone through restructuring in an effort to figure out its best path forward.

Coming into Thursday's fiscal third-quarter financial report, Deckers investors were ready to see another quarter of sagging earnings and revenue. Yet the shoemaker rewarded its shareholders with particularly strong performance, and that raised hopes that the company might finally have turned the corner. Let's take a closer look at Deckers and what it expects in the future. 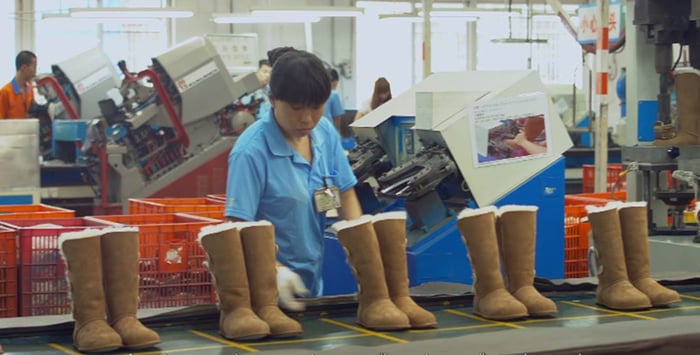 The shoe fits for Deckers

Deckers Outdoor's fiscal third-quarter results showed considerable progress in the shoemaker's strategic efforts. Sales climbed nearly 7%, to $810.5 million, shocking those who had expected to see further declines in its top line. A number of one-time factors affected Deckers' earnings, but adjusted net income jumped 20%, to $159.2 million, and that produced adjusted earnings of $4.97 per share. That absolutely crushed the consensus forecast for just $3.82 per share.

Deckers got whipsawed by a couple of extraordinary items. First, the new tax reform laws required the shoemaker to take a one-time charge for revaluing its deferred tax assets, and that combined with some other extraordinary tax-related items cost the company about $63 million in additional income tax expense. However, last year's results were hit by a nearly $129 million restructuring charge. The net result was that GAAP earnings more than doubled from year-ago levels.

As we've seen in past quarters, Deckers got the bulk of its performance from its less-well-known shoe lines. The Hoka One One brand led the way, with greater than 65% gains in sales, while Teva shoes saw sales rise by a third from the year-ago period. Yet those two brands combine for less than a tenth of what Uggs bring in, and that key product offering enjoyed just a 4% boost to its top line. The Sanuk brand once again brought up the rear, but even it managed flat performance.

Deckers saw an interesting reversal in terms of its distribution channels. Direct-to-consumer sales were up about 3% on a 1.7% rise in comparable sales. Yet wholesale net revenue jumped more than 10%, reversing a drop last quarter. Deckers continued to see international success outweigh its reception domestically, with sales from overseas rising 14% compared to just a 2.5% pickup for U.S. numbers.

CEO Dave Powers highlighted the changes. "Our refined product strategies, enhanced consumer messaging, and wholesale account optimization efforts," Powers said, "resulted in much stronger full-price selling for our brand portfolio during the key holiday season." The CEO was also pleased about the work that Deckers' employees put in, as well as favorable aspects like the cold weather in the U.S. that supported Ugg sales during the holidays.

Deckers has high hopes for the coming year and beyond. As Powers put it, "I am confident that the successful execution of our profit improvement plan, combined with the recently passed tax reform, has Deckers in a great position to deliver increased value to our shareholders."

New full-year guidance for fiscal 2018 reflects the huge impact of better revenue and earnings performance. Deckers now sees sales coming in between $1.873 billion and $1.878 billion, which would represent growth of almost 5%, up from the 1% to 2% gains that the shoemaker anticipated three months ago. Adjusted earnings guidance for $5.37 to $5.42 per share is more than $1 per share higher than it previously expected.

Deckers also made some important capital-allocation decisions. The company bought back almost $25 million in stock during the quarter, and it expects to purchase another $75 million before the end of the fiscal year. Deckers also thinks it will repatriate $250 million in cash held overseas by year-end, potentially opening the door to further business uses for the cash.

Deckers shareholders were quite happy with the report, and the stock soared 7% in after-market trading following the announcement. After such a long, tough road, Deckers investors finally hope that the company will start running forward with further gains to keep up its positive momentum.