Self-driving cars are nice, but esports and game streaming have a big contribution to make to the graphics specialist's revenue.

Forget data centers and self-driving cars -- gaming has been a hot market thanks to the rise of esports, game streaming, and continued advancements in graphics technology. Gaming comprised 57% of NVIDIA's (NVDA -4.20%) trailing-12-month revenue, and the graphics specialist plans to make sure gaming remains a large, growing business for many years.

The growth of NVIDIA's gaming business

Selling expensive graphics cards to PC gamers has been a great growth driver for NVIDIA, with the gaming segment revenue up 45% on a trailing 12-month basis through the quarter ending October 2017.

The foundation of NVIDIA's success is in its superior engineering and expertise built over the last two decades as the pioneer of the graphics processing unit (GPU). NVIDIA's GPUs are typically competitively priced, offer superior performance, and require relatively lower energy to run than those of rival Advanced Micro Devices (AMD -3.66%). Gamers voted with their wallets and kept NVIDIA in the lead with 72.8% market share, according to the latest data from Jon Peddie Research. 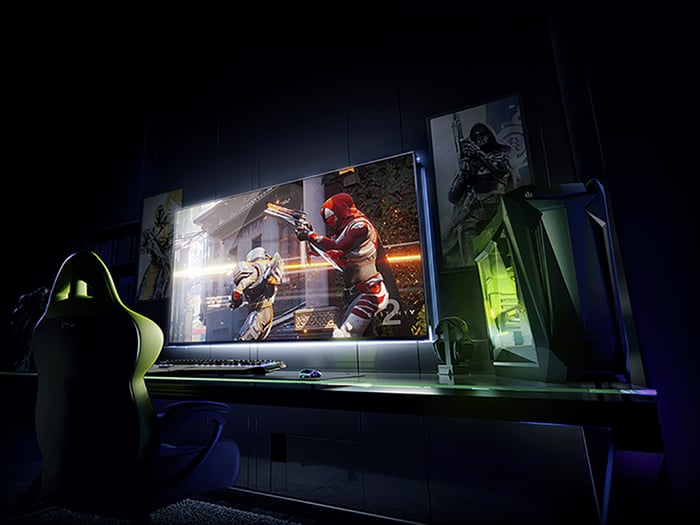 The future is looking very bright for PC gaming, with different dynamics spanning game streaming and esports creating more interest in the platform. Check out these stats:

These numbers highlight a few of the big trends shaping the gaming industry. Esports and game streaming have emerged as mainstream forms of entertainment for millennials and are helping attract more people to PC gaming.

In a lot of ways, the video game industry is entering a golden age, as clearly seen just by looking at the rapidly ascending stock prices of leading game makers. NVIDIA senses the opportunity and has started to offer additional products and services besides graphics cards to capitalize on a gaming market that is rivaling the billions of hours that people spend watching Netflix every year. 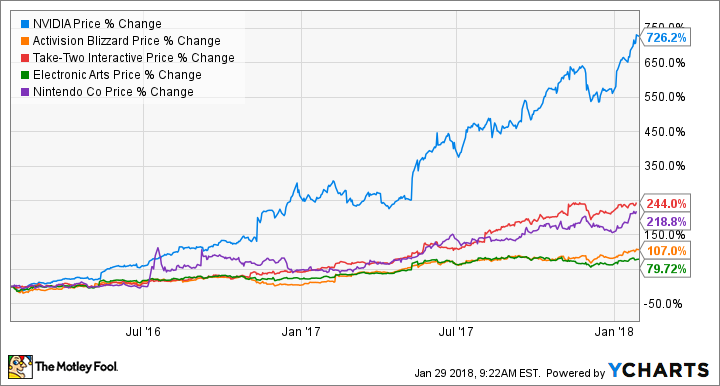 NVIDIA recently announced at the 2018 Consumer Electronics Show that it is powering a new generation of what it calls big-format gaming displays (BFGD). Leading hardware makers Acer, ASUSTEK COMPUTER, and HP (HPQ -2.78%) will use NVIDIA technology to power a 65-inch 4K HDR gaming display. It's fitting they are announcing this ahead of the inevitable launch of NVIDIA's Volta-based graphics cards for gaming, which will likely be marketed for their ability to run games at high frame rates on 4K displays. With a Volta GPU and a gloriously huge display, gamers will certainly be off in their own world.

NVIDIA also continues to expand its GeForce NOW subscription service (now available in beta to PC users), which lets gamers who can't afford a high-end gaming PC to play on one over the cloud. The intent here is clear: Bring more PC gamers into the fold who may potentially buy NVIDIA graphics cards.

Additionally, NVIDIA is supplying Nintendo with a custom processor for Switch -- which is on pace to be the best-selling console in history and positions NVIDIA to receive a healthy amount of royalties. NVIDIA has a history with consoles, having supplied processors for the original Xbox in the early 2000s. It's in the company's interest to see the entire gaming industry grow over time, not just PC gaming.

PC gaming is at the epicenter of key trends

PC seems to be where all the action is these days. That hit game I referred to earlier -- Playerunkown's Battlegrounds (PUBG) -- is the hottest one in the industry, based not only on first-year sales but also on the number of viewers it attracts on Twitch. It was released first on PC -- which says a lot about the appeal of the platform to game developers -- more than six months before releasing on console toward the end of the year.

The biggest esports tournaments are played on PC. For those fans who watch Overwatch League matches and want to emulate the best players, you better learn to play the game with a mouse and keyboard, because the best players in the world play on PC.

As esports expands its audience around the world, and as hit games like PUBG gain a huge following on Twitch and YouTube, where a lot of streamers are playing the game on PC, it will naturally draw more gamers to try PC gaming.

These are powerful trends that are still in their infancy, having started to really get growing only in the last year or two. As these new market dynamics take shape, NVIDIA should continue to see solid results from its gaming segment.