Please ensure Javascript is enabled for purposes of website accessibility
Log In Help Join The Motley Fool
Free Article Join Over 1 Million Premium Members And Get More In-Depth Stock Guidance and Research
By Jamal Carnette, CFA - Feb 3, 2018 at 10:32AM

The spots focus on a beverage even teetotalers can drink. Here's why.

Anheuser-Busch InBev (BUD 2.10%) has been one of the most active acquirers in the last four years. Data from CB Insights found the company has undertaken more than 40 acquisitions and investments just since 2013.

In many ways, investors should not be surprised about AB InBev's acquisition spree. After all, its history is predicated on a series of mergers. In 2004, Brazilian brewer AmBev and Belgian Interbrew combined to become the No. 1 beermaker. Four years later, the combined company paid $52 billion to buy U.S. megabrewer Anheuser-Busch.

Since then, the company has used its size and formidable assets to become a prodigious acquirer of companies, ranging from large purchases like the 2016 acquisition of SAB Miller to various private, smaller craft breweries like Goose Island, Wicked Weed, and Devil's Backbone. During the Super Bowl, however, the company wants you to focus on another liquid (water) and how the company serves those in need. Here's why. 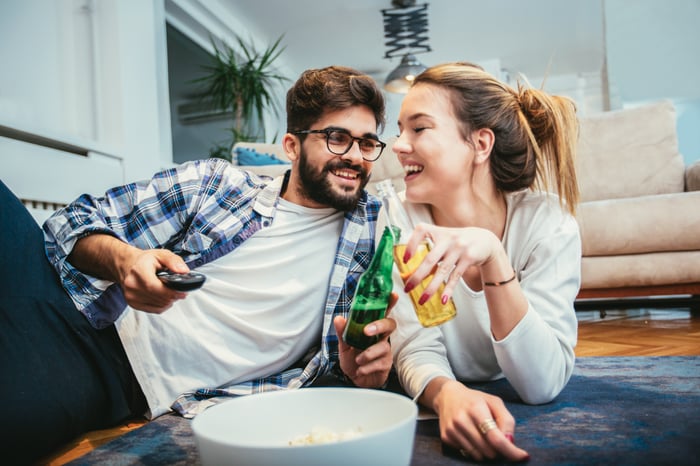 The U.S. beer industry  has suffered as the result of demographic headwinds that greatly affect a company that holds approximately a 46% share of the United States beer market. There's a distinct trend of millennials shifting away from alcohol, and the ones who do imbibe alcohol are increasingly drinking wine and liquor. When it comes to beer, folks are increasingly choose craft breweries over mass-produced beers.

This has affected AB InBev's key Budweiser brands. According to Beer Marketer Insights, Budweiser recently fell out of the top three beers in the United States in total sales, falling 4.6% on a year-on-year basis, dropping below Miller Light. Although Bud Light continues to hold on to its No. 1 spot, sales fell 4.4% from last year. (Coors Light is No. 2.) The rare bright spot was the company's low-cal Michelob Ultra, which increased shipments by 21% during the year.

The company's remedy for organic declines in its core mass-market brands appears to be to own as much of the market volume as it can legally, both in the United States and abroad. In addition to beer, AB InBev is looking to expand to new markets by adding hard ciders and even non-alcoholic beverages to its mix.

During the Super Bowl, the company is running spots to focus on another beverage: water. The first commercial highlights its actions during Hurricane Harvey, turning a local brewery into a water canning facility to help those affected by the storm. The second ad is from the company's Stella Artois brand, and features actor Matt Damon to bring awareness to the need for clean water in developing nations.

While AB InBev's new CEO, Michel Doukeris, said that the company is not trying to manage perceptions that it's the personification of "Big Beer" -- a large conglomerate buying every craft brewer it can out of fear of competition -- it's apparent the company is looking for positive press, as it has recently faced blowback from craft brewers. Most notably, Boston Beer founder Jim Koch took to The New York Times to argue that AB InBev's acquisition spree was increasing prices for both ingredients and for the product itself and leading to job losses in the sector.

Koch pleaded for effective antitrust regulation to protect smaller craft brewers. But look for AB InBev to continue to buy up smaller brewers to offset losses in its key mass-produced brands. The company may promote its water efforts during the Super Bowl, but it's increasingly likely the beer you're drinking is enriching AB InBev investors.