Please ensure Javascript is enabled for purposes of website accessibility
Log In Help Join The Motley Fool
Free Article Join Over 1 Million Premium Members And Get More In-Depth Stock Guidance and Research
By Keith Speights - Feb 3, 2018 at 10:33AM

And a couple of things to wonder about, too.

Amgen (AMGN -0.21%) shareholders sort of got used to mixed results in 2017. While the company's revenue growth was anemic at best, Amgen posted respectable earnings-per-share growth after adjusting for special items. This was the case for the first three quarters of the year. 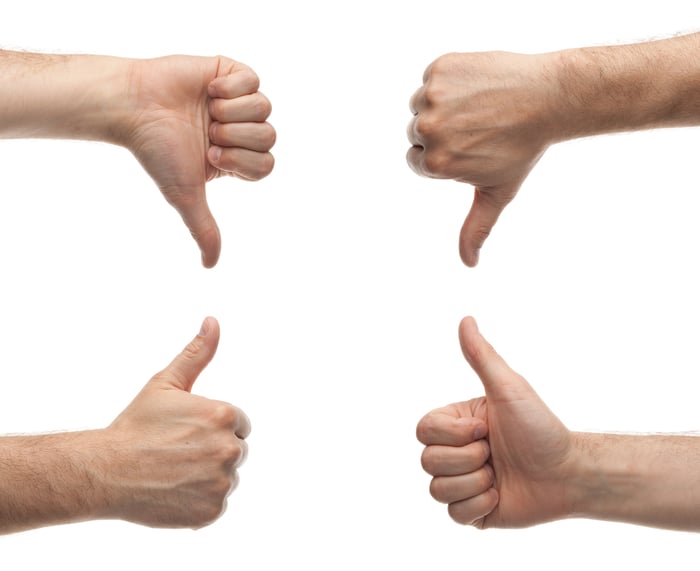 Things to hate No. 1: sinking revenue

Amgen continued to experience an overall decline in revenue in the fourth quarter. Total revenue dropped 3% year over year to $5.8 billion. It's easy to spot why.

Amgen's adjusted net income dropped 3% year over year to $2.1 billion. Stock buybacks helped the company avoid an adjusted earnings-per-share decline. On a GAAP basis, Amgen reported a net loss in the fourth quarter of nearly $4.3 billion, significantly worse than the $1.9 billion in earnings during the prior-year period. However, the loss stemmed from a one-time $6.1 billion charge related to the impact of U.S. corporate tax reform.

This free cash flow helped Amgen increase its cash stockpile to nearly $41.7 billion, including cash, cash equivalents, and marketable securities. Most of this amount was made outside of the U.S. The tax reform legislation recently implemented in the U.S. will allow Amgen to repatriate offshore cash at a reduced tax rate.

Perhaps the best news for shareholders is that Amgen plans to return plenty of cash to them in a couple of ways. The biotech's board of directors approved an additional $10 billion for stock repurchases on top of the existing $4.4 billion in share repurchase authorization as of Dec. 31, 2017. Last year, Amgen bought back $3.1 billion worth of its stock.

Amgen also announced a dividend increase of 15%. This marks the company's seventh consecutive year of dividend hikes. Since the initiation of its dividend program in 2011, Amgen has increased its dividend payout by a whopping 371%. Its dividend now yields 2.76%.

Things to wonder about

I think there are also several things for Amgen investors to wonder about. One such item is whether or not Amgen CEO Bob Bradway's optimism about the company's long-term growth drivers is warranted.

At the J.P. Morgan Healthcare Conference held in early January, Bradway listed five drugs that he predicted would enable Amgen to grow in the future. Only one of them is currently a blockbuster with solid sales growth -- osteoporosis drug Prolia. However, the jury is still out on cholesterol drug Repatha, multiple myeloma drug Kyprolis, migraine drug Aimovig, and Amgen's biosimilars.

There are reasons for Bradway's optimism, though. Repatha's product label now reflects the drug's potential to prevent heart attack and stroke. Kyprolis could receive a helpful label update showing positive overall survival results, with an FDA decision expected by April 30, 2018. Aimovig should win approval in May.

Perhaps the biggest thing to wonder about, however, is what Amgen might do on the acquisitions front. Bradway acknowledged at the J.P. Morgan conference that there is "potential for doing some attractive business development." The right deal could give investors something else to like about Amgen -- and maybe even love.