For years, customers flocked to Chipotle Mexican Grill (CMG 2.17%) to get a delicious meal, and often, they would wait in a long line to do so. That came to an end after a number of E. coli events in 2015. Since then, traffic has been considerably below peak levels. The burrito maker's financials have deteriorated, and its efforts to increase traffic haven't worked. Chipotle needs a loyalty program now more than ever, and it doesn't have to look very far to find someone who knows about the technology needed to make it happen.

Chipotle needs customers to come back

Average restaurant sales dropped from the first E. coli outbreak reported in October 2015 to their lowest point in the fourth quarter of 2016. While the number has rebounded, it's been basically flat for the first three quarters of 2017. 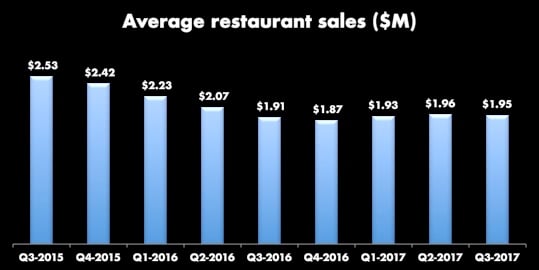 Jack Hartung, Chipotle's chief financial officer, underscored the importance of this number in a conference call over the summer. "As we move from just about $2 million, to $2.2 million, to $2.4 million [in annual revenue per store], we can step-by-step recover our entire economic model."

The following graph shows how healthy average store sales of $2.53 million in the third quarter of 2015 resulted in better cost efficiency compared with Q3 of 2017, when average revenue per store was 23% lower. The company is acutely aware of this dynamic and has tried to improve store traffic with a number of initiatives.

In the summer of 2016, Chipotle launched its temporary Chiptopia program, which rewarded repeat customers. While this program was able to briefly bring up sales, flaws in the program drove customers to split up orders, which drove up credit card fees and slowed down the checkout line.

The company's highly anticipated queso introduction in the fall of 2017 also brought customers in initially, but it doesn't look to be a long-term traffic driver. While queso was the most requested menu addition, reviews have been mixed, and the company ended up changing the recipe. Only 15% of orders in Q3 added queso, and that's likely to decrease as the novelty wears off. 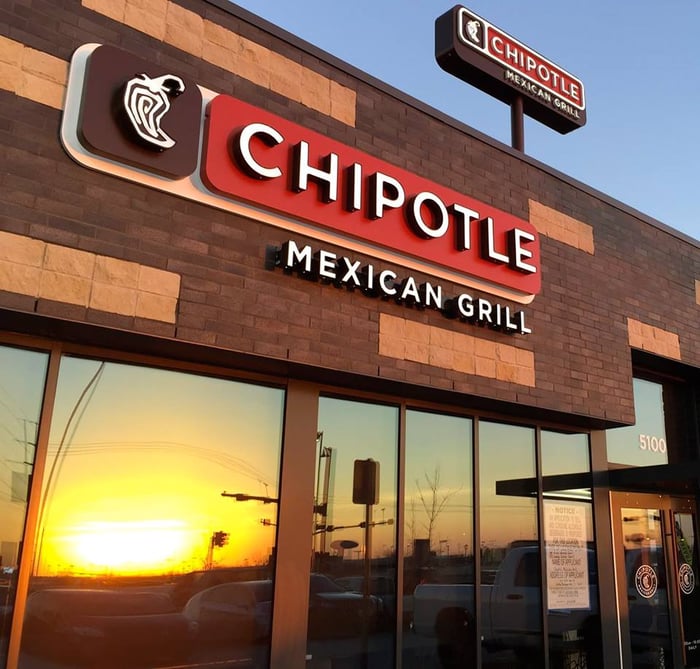 All the while, Chipotle has been ramping up its advertising spending, something the company didn't have to do in the past. For the first nine months of 2017, marketing and promotional costs were 3.4% of revenue, which was "above historical levels." according to the company. With store revenue essentially flat for the year, this advertising spend seems have been a waste of money.

This shows me it's time for Chipotle to institute a loyalty program.

To get an idea of what a loyalty program could bring to Chipotle, it makes sense to look at another restaurant's program, like the Starbucks (SBUX 0.09%) card program. By any measure, its loyalty program is impressive. For the fourth quarter, the company reported:

Starbucks has seen a lift of customer spend from 20% to 70% after members join the program.

Starbucks also collects lots of customer data through its loyalty program, which enables the company to drive its digital flywheel and target specific promotions to members based on their spending habits.

Chipotle has the talent and capability to roll out this kind of program. In fact, Curt Garner, Chipotle's chief information officer, was part of Starbucks' information technology team for 13 years and spent the last three years as the company's CIO. Since coming to Chipotle, Garner has revamped Chipotle's app, helping to increase sales through digital ordering to an impressive 8% of total sales. Garner hinted in the Q2 earnings call that the improvements in the app allow for promotions that would be "the first step toward what a loyalty program would look like for Chipotle." That was over five months ago, however, with no mention from management since.

While investors are left to wonder if the company will institute a loyalty program to help boost lagging sales, Chipotle did reward a customer's loyalty in December. Bruce Wayne (the company says that's his real name) of Ohio set a record by eating a meal at Chipotle for a consecutive 426 days. The company presented Wayne -- who, of course, is a Batman fan -- with a "custom-made Chipotle superhero cape and cufflinks." As a longtime Chipotle shareholder and customer, I hope the company will create a better loyalty program than that, and soon.