Please ensure Javascript is enabled for purposes of website accessibility
Log In Help Join The Motley Fool
Free Article Join Over 1 Million Premium Members And Get More In-Depth Stock Guidance and Research
By Asit Sharma - Feb 4, 2018 at 8:33AM

The company behind the award-winning paper has generated headline-worthy stock performance over the last 12 months. Can this business news story remain fresh after earnings?

Long-time advocates of investing in the company behind the staid journalistic institution that is The New York Times are finally enjoying some company. Shares of news publisher and content provider  The New York Times Company (NYT 2.51%) generated a total return of 40% last year. More impressive, as of this article date, the company's stock has tacked on another 26% in the month of January.

With such market interest and given the quick recent run-up, it's possible that the paper's fourth-quarter 2017 earnings report, to be released on Feb. 8, will cause shares to retrace -- regardless of how positive the numbers look. Below, let's briefly discuss essential trends that investors should follow in order to remain focused on the big picture.

Digital subscribers, and the growth in total subscription revenue

Last quarter, management provided a fourth-quarter 2017 projection of high-teens growth in subscription revenue, including the impact of an extra week versus the prior year.

Yet when removing the extra week, on an apples-to-apples basis, the company expects total subscription revenue to improve just 10%. This slower rate of growth is due to the difficult comparison against the election-year fourth quarter of 2016, in which digital-only subscriptions jumped 46%. 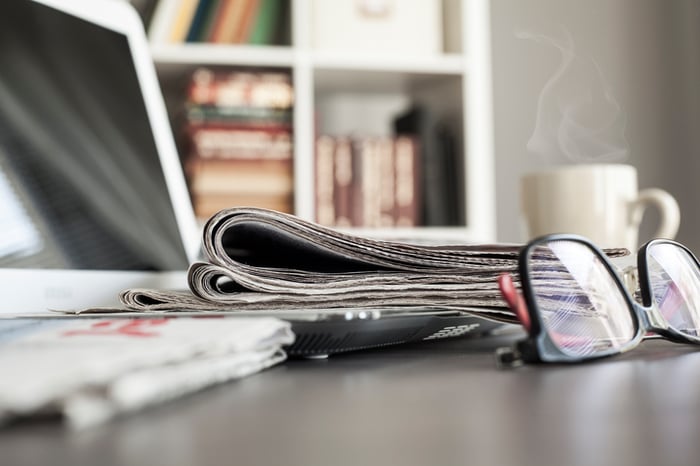 An offset to print advertising decline

At a little less than one-third of total revenue, advertising sales still play a significant role in the Times' revenue puzzle, although they've deteriorated in recent years. Through the first three quarters of 2017, advertising revenue dropped 5%, and that pace is expected to accelerate in the final quarter -- the company has warned investors to expect a high-single-digits retracement from the previous year.

In November, I discussed the strategies The New York Times can implement as its subscription boom inevitably slows, and subscription intake normalizes. These strategies are: exploiting revenue opportunities such as the company's burgeoning New York Times Crosswords subscription service, maximizing noncore revenue through product referral websites like the Times' Wirecutter site, and engaging in modest bolt-on acquisitions.

When the company reports earnings, investors can expect to hear management discuss initial results for its newest content vertical, the New York Times Cooking subscription service. Potentially, executives will clue investors in on upcoming services, as the newspaper created an entire division last year devoted to launching products similar to Crosswords and Cooking, to capitalize on its brand trust and exploit high-interest areas within its subscription base.

I'm eager to learn if management will continue to seek small, but earnings-accretive (i.e. adding to earnings) acquisitions in the mode of Wirecutter, a fast-growing revenue stream that in its present format resulted from two separate 2016 acquisitions.

Higher free cash flow courtesy of brisk subscription growth would suggest that the company has ready money once it identifies a suitable purchase. Through the first nine months of 2017, the organization increased its cash balances by nearly 1.5 times, to $245 million: Look for the company's balance sheet to show additional expansion in the fourth quarter.

About that January momentum

At the outset of this article, I mentioned the January surge in the company's shares. Much of this boost came early in the month when Facebook announced that it would prioritize news sources it deemed "trustworthy" in the feeds it servers users.

This action is expected to cull the amount of news on Facebook's site by 20%, which should theoretically benefit providers of high-quality journalism like the Times, as fewer organizations will compete for traffic, opening revenue opportunities for the paper.

I'm not sure how much time, if any, management will devote to discussing this potential content and advertising boon on the company's earnings conference call. But investors' reaction demonstrates how perception of the organization has shifted in a very short amount of time. Where investors once identified the Times with the decline of an industry (print newspapers), it's now viewed as a beneficiary of the growth of content monetization.

This change in the market's assessment of The New York Times' earnings potential has contributed to its handsome stock chart, an ascent which might falter in the near term if growth can't keep up with ever-higher expectations. Thus, it's all the more important for shareholders to focus on the key trends above, and take any immediate speculative price action in context, when the company issues its fourth-quarter report on Feb. 8.