Please ensure Javascript is enabled for purposes of website accessibility
Log In Help Join The Motley Fool
Free Article Join Over 1 Million Premium Members And Get More In-Depth Stock Guidance and Research
By Lou Whiteman - Feb 5, 2018 at 8:33AM

The aerospace giant is using its venture arm to try to future-proof its business.

Boeing (BA -1.25%) is thriving today, thanks in part to strong demand for its latest and greatest commercial jets, but the company is also focused on the future. While many in the auto industry were accused of resting on their laurels as upstart Tesla stormed in with its electric-car offering, Boeing is taking steps to make sure history doesn't repeat itself in the aerospace business.

Boeing's HorizonX venture capital unit last week announced an investment in Cuberg, a Berkeley, California-based battery development company. Terms of the deal were not disclosed, but the investment reportedly totaled about $2 million. 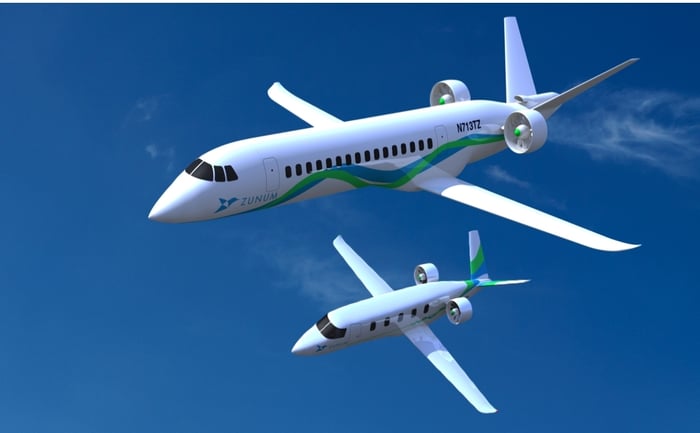 The engineering challenge of electric flight is more complicated than electrifying cars, because of the heavy energy demand from a propulsion system powerful enough to keep a large plane at altitude, the risk of catastrophe should there be a fire, and the importance of keeping weight to a minimum. Current batteries are simply too heavy -- and potentially too unstable -- to be deployed in a commercial jet.

That's where Cuberg comes in. The company is developing a lithium metal anode, proprietary electrolyte, and high-voltage cathode battery that it hopes will be lighter and less flammable than what is now available, with what Boeing HorizonX head Steve Nordlund in a statement called "some of the highest energy density we've seen in the marketplace." The work is still early, with Cuberg expected to test its prototype before year's end, but Nordlund said "its unique chemistries could prove to be a safe, stable solution for future electric air transportation."

Boeing could find uses for Culberg products beyond just commercial aviation should the batteries work as hoped. The company in 2016 acquired Liquid Robotics, a maker of ocean drones, and its defense arm could find applications for the batteries on various aircraft and deep-sea platforms.

Joining HorizonX in what was described as a second-seed round is existing investor HPC Energy Services, a Calgary-based integrated oil and gas product and service company that hopes to use Cuberg batteries to power in its future gear. Established in April 2015, Cuberg, according to Boeing, also has a "multimillion-dollar joint development agreement" with an unnamed battery manufacturer.

This is HorizonX's eighth investment since being formed last April, and its first focused on batteries. The company last year invested an undisclosed amount in Zunum, a Washington-state based start-up that hopes to build 10- to 50-seat hybrid-electric aircraft that could more affordably serve commercial service to smaller markets. JetBlue Technology Ventures, a unit of JetBlue Airways, is also an investor in Zunum.

The plan for Boeing, as the giant incumbent in an established industry, is to be a part of any disruptive change in aerospace technology instead of being caught off guard by it.

"Our ability to identify, shape, and harness game-changing innovations wherever they are developed is key to sustaining and growing our leadership in aerospace," company Chairman and CEO Dennis Muilenburg said last year. "Boeing HorizonX is tasked with ensuring we are fully engaged with opportunities from early-stage companies, market trends, and emerging technologies while also fostering more rapid and effective internal innovation."

One for the future

While the prospects of electric flying are enticing, don't expect Boeing to become the Tesla of the skies anytime soon. Cuberg's technologies may prove to be the breakthroughs needed in terms of battery weight and performance, but even if so, it will take years, if not decades, before commercially viable electric planes are cruising the skies.

Development work is needed in other areas as well. Boeing archrival Airbus in November teamed with Siemens and engine maker Rolls-Royce to develop a hybrid-electric propulsion system for commercial planes, part of a growing electrification partnership between Airbus and Siemens. These moves by the industry are the early steps of a transformation, and not anything that is going to affect the bottom line anytime soon.

Fortunately for Boeing investors, its current lineup of jets, including the 737 and 787, are selling strong, leading to a phenomenal year for the company. With free cash flow totaling $2.5 billion during the recently completed quarter and $11.6 billion for all of 2017, Boeing can afford to make investments like Cuberg to try to help future-proof its business.