Please ensure Javascript is enabled for purposes of website accessibility
Log In Help Join The Motley Fool
Free Article Join Over 1 Million Premium Members And Get More In-Depth Stock Guidance and Research
By Brian Feroldi - Feb 5, 2018 at 11:04AM

It was a strong start to the year for the top dog in robotic surgery.

Shares of Intuitive Surgical (ISRG 2.69%) rose more than 18% in January, according to data from S&P Global Market Intelligence. Investors can credit the move to a strong finish in 2017 and bullish guidance for the year ahead.

Intuitive kicked off January with a bang when it shared preliminary results with investors at the annual J.P. Morgan Healthcare conference. The company said it expected fourth-quarter revenue to grow by 18% year over year thanks to double-digit gains in all three of its revenue categories (services, system sales, and instruments and accessories). Management credited the gains to strong growth in system sales and 16% overall growth in procedure volume for the full year. 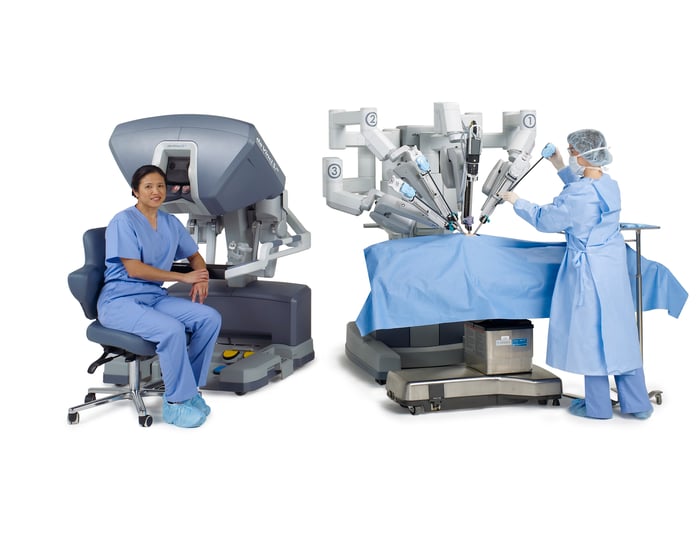 The share price remained high even after Intuitive released its official quarterly results. While revenue wasn't a surprise, management did share that its non-GAAP EPS grew by 25% year over year. What's more, investors were also pleased to hear that management had forecasted procedure growth between 11% and 15% for the upcoming year. Since management has a history of sandbagging its procedure growth guidance, that news was music to Wall Street's ears.

For 2018, management stated that they plan on placing an emphasis on growing the company's presence in international markets. China and Japan are particular areas of focus, but success in these countries is heavily dependent on government action. For that reason, CEO Guthart believes growth in these countries will take time.

However, Intuitive also has a new challenge to overcome in the year ahead: competition. A small-cap company called TransEnterix (ASXC -4.04%) recently won FDA approval for its robotic surgery system and will be pushing hard to drive adoption. Medical device giant Medtronic (MDT 1.82%) also has plans to launch its own robotic surgery system later this year.

It is unknown at this time whether or not this incoming competition will hinder Intuitive's growth or not. However, my hunch is that the company will be just fine. Intuitive's install base is massive, and healthcare providers typically remain loyal to a brand once they have grown comfortable with one type of system. Intuitive also has a history of rolling out new systems and expanding into new procedures, so I see no reason not to assume that will be the case moving forward.

All in all, this happy shareholder continues to believe that Intuitive remains an ideal buy-and-hold investment.