Please ensure Javascript is enabled for purposes of website accessibility
Log In Help Join The Motley Fool
Free Article Join Over 1 Million Premium Members And Get More In-Depth Stock Guidance and Research
By Lee Samaha - Feb 5, 2018 at 11:49AM

The truck market looks headed for a big improvement in 2018.

It's not hard to see the catalyst behind the big move in commercial truck and industrial parts maker Meritor, Inc's (MTOR -0.14%) big stock price move in January. According to S&P Global Market Intelligence, Meritor's stock price increased 16.3% in January, with most of the move occurring on the day Meritor released its first-quarter fiscal 2018 earnings report. 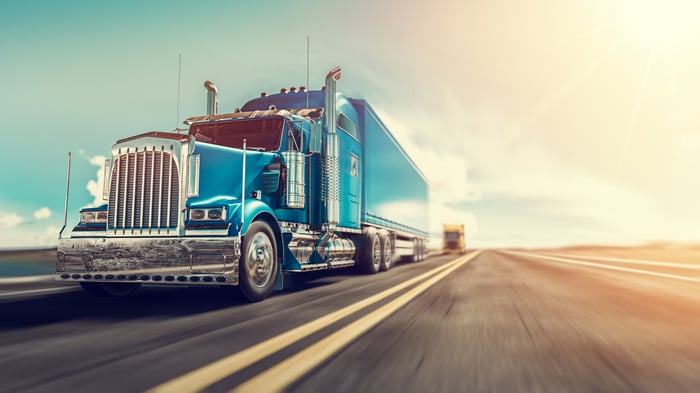 While the report showed Meritor beating analyst estimates for the first quarter, the real headlines were in the guidance and outlook. A few highlights:

The extent of the improvement in outlook can be seen in the table below.

Other than making Meritor immediately more attractive from a near-term valuation perspective, the improving outlook also suggests Meritor is set for longer-term growth. For example, around 40% of Meritor's growth in fiscal 2018 is likely to come from Meritor's new business wins, according to CFO Kevin Nowlan.

Moreover, the most significant increase in outlook came in Meritor's core market of North America. Management now expects North America heavy duty class 8 industry truck production to be 280 thousand to 300 thousand, that's up by 20 thousand from its previous outlook range. Incidentally, you only have to look at what the industry was forecasting at the start of 2017 to see how strong Meritor's current outlook is.

All told, Meritor is seeing end market growth and new business wins in the geographic areas where it's best placed to take advantage.

With expectations for a pickup in U.S. GDP growth in 2018, and strengthening transportation and commodity markets, the outlook is good for the trucking industry in 2018. Consequently, investors will be hoping for more increases in guidance to come while expecting the company to convert its new business wins into profit growth down the line.

Why Meritor Stock Is Soaring Today