Please ensure Javascript is enabled for purposes of website accessibility
Log In Help Join The Motley Fool
Free Article Join Over 1 Million Premium Members And Get More In-Depth Stock Guidance and Research
By Neha Chamaria - Feb 6, 2018 at 8:15AM

These boring industrial machinery stocks are poised to grow rapidly in coming years.

Industrial machinery stocks enjoyed a strong run-up in 2017, thanks to robust spending, activity, and employment in the manufacturing sector. 2018 should be another good year if the upward trend in the ISM manufacturing index is anything to go by -- the manufacturing sector, overall, has been growing for 17 straight months now. That bodes well for industrial machinery stocks, or simply companies that manufacture basic tools, hardware, and equipment. Note that I'm not talking about heavy machinery here, but smaller, essential tools like valves, saws, fasteners, hoists, bolts, hoses, and power tools.

Of course, not every machinery manufacturer is minting money. The industrial machinery industry is evolving rapidly as end users want to be better equipped to ride global trends such as urbanization, climate change, digitization, and automation. That means only the established manufacturers that are constantly innovating are poised to benefit from the next industrial upturn. Three such top industrial machinery stocks that could grow by leaps and bounds are Ingersoll-Rand PLC (TT -0.11%), Stanley Black & Decker (SWK 0.26%), and Parker-Hannifin Corp. (PH -1.49%).

Stanley Black & Decker is one of the world's most recognized brands. Chances are, the hand and power tools you've been using to repair your car or home, or that lawnmower in your backyard, or even the fasteners that secure your car and phone, belong to one of Stanley Black & Decker's brands. Elsewhere, the company's mind-boggling range of industrial tools and security solutions have been widely used for decades by players in industries such as automotive, aerospace, infrastructure, electronics, and healthcare. 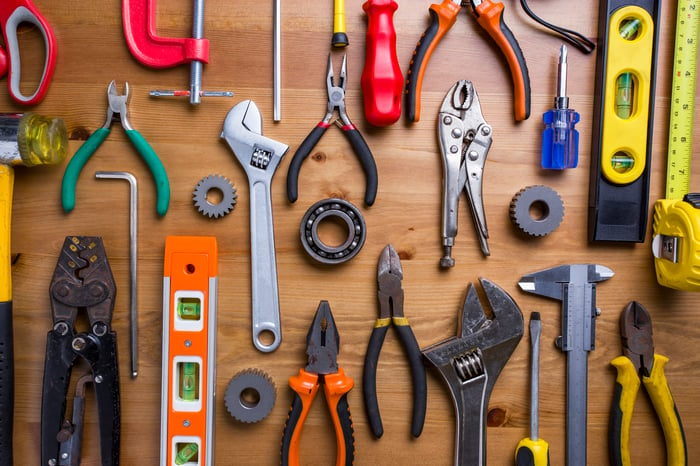 Stanley's strategy to bolster its brand power with opportunistic investments continues to boost its margins and cash flows. In fiscal 2017, Stanley reported 12% and 14% growth in revenue and EPS, respectively. Acquisitions, especially that of Newell Brands' tools business -- consisting of its Irwin and Lenox brands -- and Sears Holdings' Craftsman brand, played a big role in the company's top-line growth.

Management's outlook for 2018 and beyond is encouraging: It projects organic revenue and adjusted EPS growth of 5% and 11%-14%, respectively, along with 100% free-cash-flow conversion (percentage of net income converted to FCF). Stanley's long-term goals include:

The last two are particularly noteworthy. While strong FCF growth is a testimony to the industrial machinery manufacturer's financial fortitude, steady and growing dividends have made Stanley investors richer over the years. Actually, that understates Stanley's dividend record: The company has paid a dividend every year for 141 years and increased it for 50 consecutive years, making it one of the safest dividend stocks you can find the industrials sector.

This machinery manufacturer believes in growth via innovation

On the face of it, Ingersoll-Rand looks like a simple company with only two business segments -- industrial and climate. In reality, the two businesses are as different as can be, making Ingersoll one of the most diversified industrial machinery stocks. 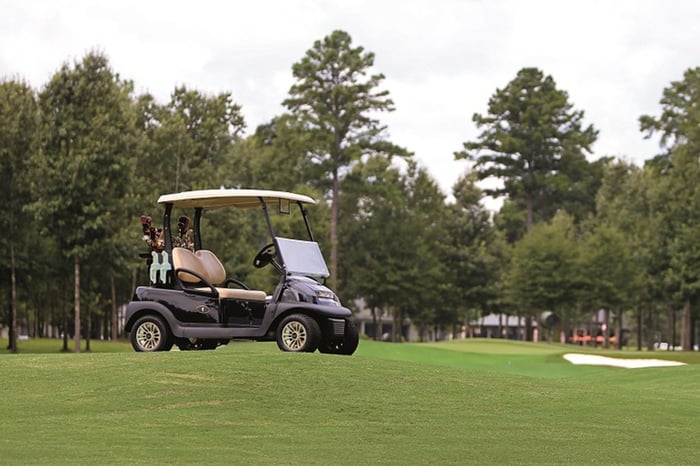 Diversification, coupled with innovative leadership, have propelled Ingersoll to new heights over the years: Innovation drove 23% of its revenue between 2012 and 2016, backed by more than 200 product launches in just the past three years. Ingersoll's annual income has nearly doubled on smaller top-line growth in the past five years. The trend continued into fiscal 2017, with Ingersoll's adjusted earnings per share from continuing operations (after excluding one-time items such as a tax benefit) climbing 21% on 8% growth in revenue. Management also raised its dividend by 12.5% and pumped $1 billion into share repurchases last year.

2018 looks promising, as Ingersoll is guiding for:

That's pretty much in line with management's goals of generating operating margins of 14.5%-15% and growing EPS at compounded annual rates of 11%-13% through 2020. That should also mean higher dividends for shareholders -- Ingersoll's dividend has grown sixfold since 2011, driving the stock's total returns to nearly 130% since.

2017 was Parker-Hannifin's centennial year. Over the decades, the company has grown to become the world's leading manufacturer of motion control and fluid systems components. That's not an easy business to be in: Parker-Hannifin's portfolio consists of "hundreds of thousands of individual products" that have applications across all sectors. The good part is that no single product contributes more than 1%, and no single customer more than 3%, to the company's sales. Diversification is, therefore, among Parker-Hannifin's biggest competitive strengths. 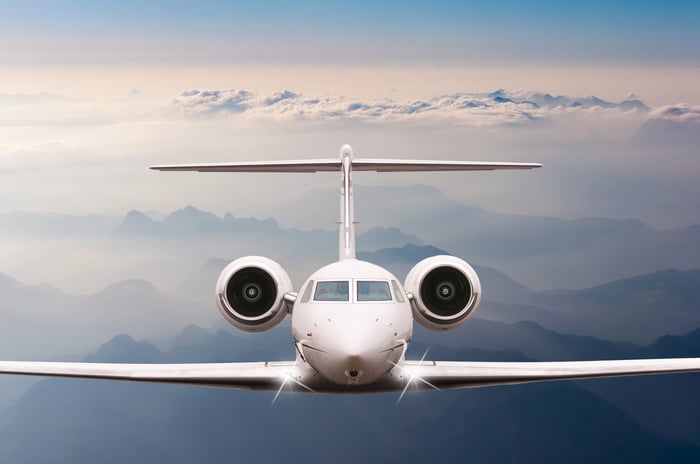 2017 was a significant year for another reason: Parker-Hannifin acquired filtration products manufacturer CLARCOR for $4.3 billion in its biggest ever deal. The U.S. Department of Justice later filed a lawsuit against the acquisition over competitive concerns, but Parker-Hannifin has already proposed to divest CLARCOR's Facet filtration business in a settlement. Parker-Hannifin revealed that Facet accounted for only $60 million of CLARCOR's annual revenue of $1.5 billion, hinting that it isn't likely to lose much from such a divestment.

The CLARCOR acquisition should, otherwise, give Parker-Hannifin significant headway into high-margin markets, especially aviation filtration and aftermarket. The industrials machinery manufacturer is already poised for growth, anticipating record sales and earnings in 2018 and projecting adjusted earnings of $8.45-$9.15 per share. It earned $8.11 in adjusted EPS on revenue worth $12 billion in fiscal 2017.

Those projections are in line with Parker-Hannifin's long-term goals that include:

If those goals aren't encouraging enough, here's a chart that reveals one big reason I like Parker-Hannifin: its incredible FCF conversion history. 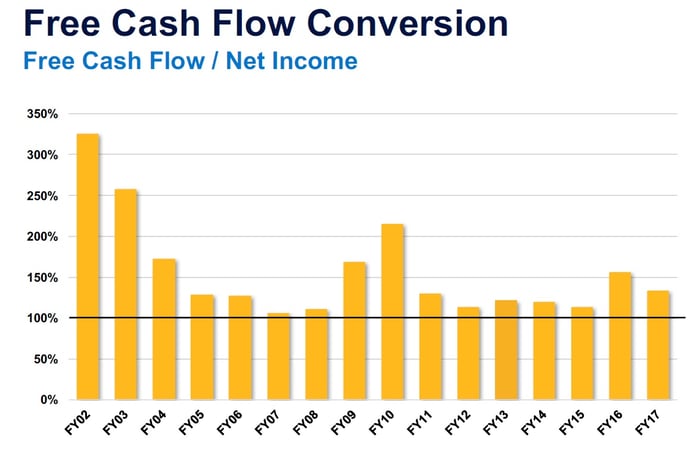 There's another great reason I consider Parker-Hannifin one of the top industrial machinery stocks for long-term investors: It's a Dividend Aristocrat, having increased its dividends every year for 61 consecutive years now. That's among the best dividend streaks in the market today.

2 Stocks That Could Benefit From Hydrogen Power