Favorable changes to the yen's value in dollars -- and a boost from new U.S. tax laws -- helped Toyota to a nice profit increase.

Toyota Motor Corporation (TM 0.84%) said that its operating profit jumped 54% in the quarter that ended on Dec. 31, thanks to strong sales in its home market and favorable shifts in key exchange rates.

Toyota's 673.6 billion yen ($6.2 billion) operating profit for the period was well ahead of the consensus analyst estimate of 527.22 billion yen as reported by Thomson Reuters. Its net income was even higher: 941.8 billion yen ($8.6 billion), nearly double its year-ago result, thanks to a windfall related to the new U.S. tax laws.

Buoyed by the strong result, Toyota raised its guidance for the full fiscal year that will end on March 31. 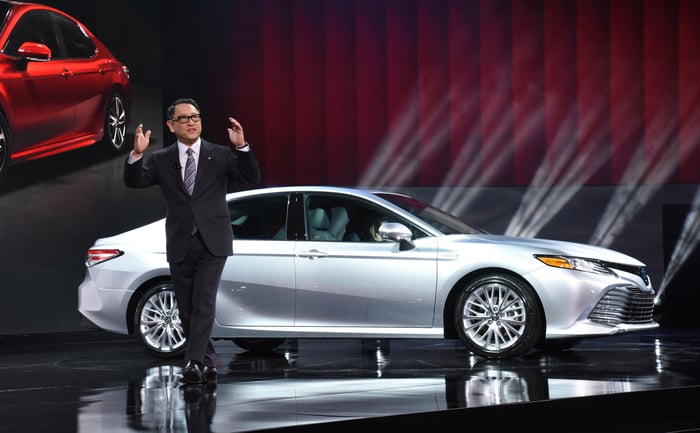 Like many Japanese companies, Toyota uses a fiscal year that begins on April 1. The quarter that ended on Dec. 31, 2017, was the third quarter of Toyota's 2018 fiscal year.

Data source: Toyota Motor Corporation. Vehicle sales include the vehicles sold by Toyota's unconsolidated joint ventures in China and are rounded to the nearest thousand. YOY = year over year.

Unlike rival Honda (HMC 0.25%), which manufactures most of its vehicles in the regions where they're ultimately sold, Toyota still makes a significant percentage of its total production in Japan for export to other markets. That makes it especially vulnerable, for better or for worse, to swings in exchange rates -- the yen-to-dollar and yen-to-euro rates in particular.

For investors, the key point is that when Toyota has a significant year-over-year change in operating profit, exchange rates are usually a major factor. That was definitely true in this quarter: Toyota's operating income increased by 235 billion yen ($2.15 billion) from the year-ago quarter, and the company attributed 83% of that increase -- 195 billion yen ($1.78 billion) -- to exchange-rate movements. 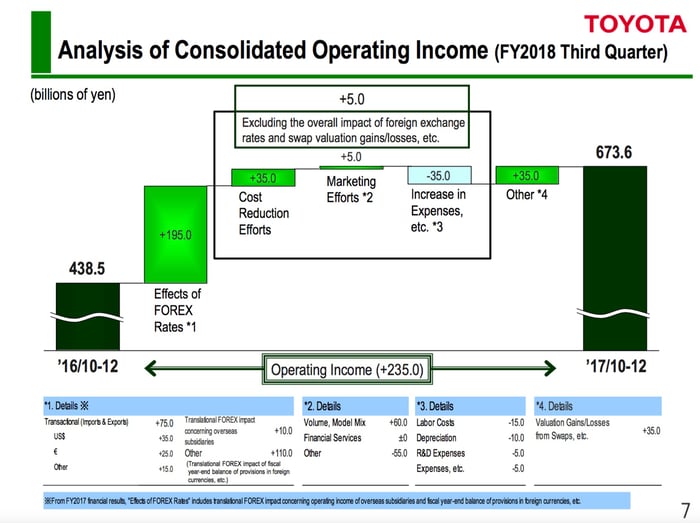 And the rest? The results of Toyota's ongoing cost-cutting effort were offset by increased expenses in the quarter. Selling a higher percentage of (higher-profit) SUVs to (lower-profit) sedans helped by about 60 billion yen, though much of that was offset by increased spending on incentives, particularly in North America. Increases in the valuation of derivatives (like interest rate swaps) held by Toyota accounted for much of the remaining gain.

Here's a look at how all of that affected Toyota's operating profit by region. 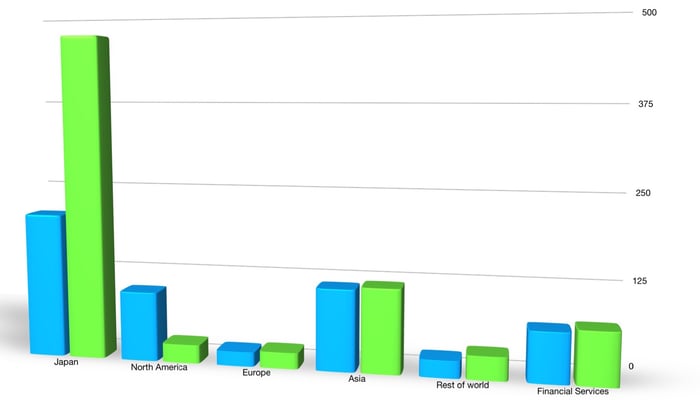 Data source: Toyota Motor Corporation. Results for Asia exclude Japan. Operating income for each region is shown in billions of yen, for the most recent quarter (in green) and the year-ago quarter (in blue).

What about that tax break?

Toyota's net profit nearly doubled from a year ago, increasing by 455.3 billion yen year over year. Part of that increase was due to the gains in operating income, of course -- but Toyota also realized a 291.9 billion yen reduction in income taxes, much of it due to the new, lower U.S. corporate tax rate.

The windfall for Toyota contrasts sharply with the experience of rival General Motors (GM 1.35%), which took a $7.3 billion charge against its fourth-quarter earnings related to the new tax law.

GM has carried what it calls "deferred tax assets," tax breaks that it's entitled to take because of past losses, on its balance sheet for several years, using them up as allowed over time; those assets are now worth less (on paper) because of the cut in the U.S. corporate tax rate from 35% to 21%.

A boost in Toyota's full-year guidance

As it did in the first and second quarters of its 2018 fiscal year, Toyota once again raised its guidance for the full year that will end on March 31.

Why the increases? Toyota now expects the euro to weaken a bit more versus the yen than it had expected. Its forecast for the yen-to-dollar rate is unchanged from prior guidance.