Please ensure Javascript is enabled for purposes of website accessibility
Log In Help Join The Motley Fool
Free Article Join Over 1 Million Premium Members And Get More In-Depth Stock Guidance and Research
By Jason Hall - Feb 7, 2018 at 11:19AM

An earnings report that showed the burrito giant continues to struggle with traffic growth, an analyst downgrade, and weak growth projections have investors selling.

Shares of Chipotle Mexican Grill, Inc. (CMG -0.04%) are down 10.6% at 11:25 a.m. EST on Feb. 7, following the company's after-hours fourth-quarter earnings release on Feb. 6. While the company did report 7.3% sales growth and a big increase with earnings of $1.55 per share for the quarter and $6.17 per share for the fiscal year, it also left investors with concerns that things aren't improving as quickly as many had anticipated.

While Chipotle finished the year with 14.7% sales growth and a 6.4% increase in comps -- sales at restaurants open more than one year -- its fourth-quarter results continue a trend from the third quarter of weakening traffic. Over the past two quarters, the company has reported comps growth of around 1%, significantly lower than the double-digit rates it delivered in the first half of the year. 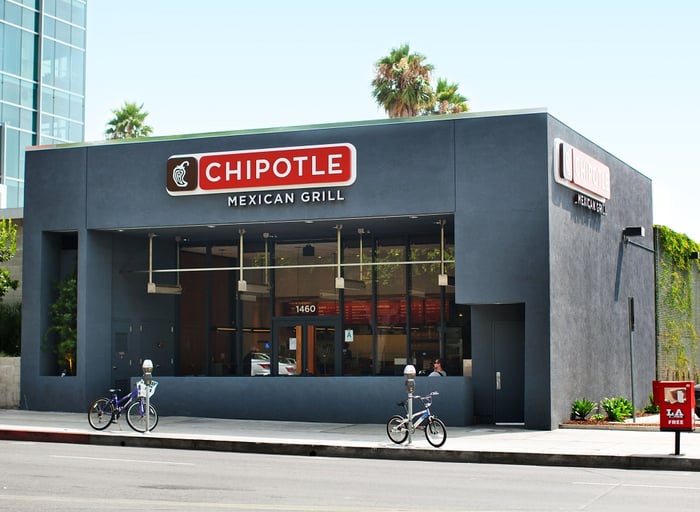 Traffic is a real problem at Chipotle. Image source: Chipotle.

Even more concerning, the roughly 1% growth it did manage to produce was entirely a product of higher prices, which was necessary to overcome a decline in traffic in the second half of the year.

Soon after earnings, one analyst downgraded Chipotle stock to a sell and lowered his price target to $250, based on his expectations that traffic will remain a problem for Chipotle in the short term. Factor in management's forecast for comps growth in the "low single-digits" and investors, at the very least, should keep their expectations in check.

It's not just comps that are slowing, either. Chipotle plans to open 130 to 150 new restaurants in 2018, a big reduction from the 200-plus it had been opening more recently. Between low single-digit comps growth and store growth of 5% to 6%, the company is on track to deliver similar revenue growth to its fourth-quarter result. If it can leverage its scale and operating costs effectively, it could turn that into high single-digit to low double-digit earnings growth, but it may be a stretch to expect much more than that, especially if the company cannot find a way to reverse the negative traffic trend. After all, there are still fewer customers coming into its restaurants now than before the late-2015 food-borne illness scares that drove so many away.

Chipotle remains a great company with a compelling story and brand, but weak traffic and comps growth based solely on higher prices isn't a sustainable path for growth. Until traffic improves, growth at Chipotle is going to be harder to come by.