Please ensure Javascript is enabled for purposes of website accessibility
Log In Help Join The Motley Fool
Free Article Join Over 1 Million Premium Members And Get More In-Depth Stock Guidance and Research
By Daniel B. Kline - Updated Feb 7, 2018 at 7:00AM

It's not just Millennials moving back in with their parents that's causing a rise in "doubled up" housing.

More American adults now share their home with another adult with whom they are not romantically involved. In fact, the percentage of grownups living with at least one other adult who is not the household head, the spouse or unmarried partner of the head of household, or an 18- to 24-year-old student has increased steadily since 2006, according to a report from Pew Research. 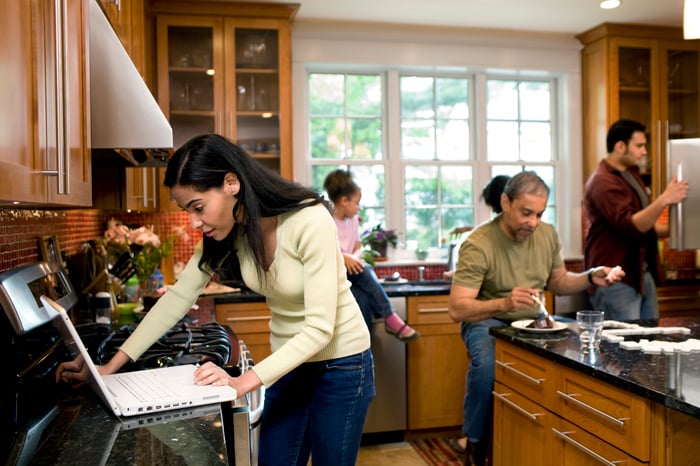 More American adults are living with each other. Image source: Getty Images.

Data for how many adults live in the average American household only goes back to 1995 when 28.8% of adults lived doubled up in a shared household. That number decreased to 27.4% in 2004, the year when home ownership peaked. Numbers began climbing steadily after that rising to 31.9% in 2017.

In 1995 7% of adults living in another adult's household were the parent of the household head. That number has increased to 14%. And, while jokes abound about Millennials moving back in with their parents, the number of adults living with their mom and/or dad has dropped to 47% from 52% in 1995.

Doubling up is not the only trend

The number of doubled up households has offset the fact that fewer Americans are living with a spouse or unmarried partner. Since 2007, the first year the Census Bureau collected that data, the number of people living without a spouse or partner has climbed to 42% from 39%. To break down those statistics, the number of married adults has fallen while more non-married couples are living together, but not in great enough numbers to offset the declines in marriage.

"While Americans are less likely to be living with a spouse or unmarried partner in their household, the rise in doubling up means more adults are living with nonrelatives and with relatives other than romantic partners" wrote Pew's Richard Fry. "As a result, the average number of adults per household has not declined since 1995, and consequently, the number of households per adult has not increased."

If the number of adults per household was to decline it would impact demand for housing. The doubling up trend is driven partly by economics -- houses are expensive and sharing lowers costs -- but also due to the needs of aging parents which are not purely economic. Doubling up with older relatives might be driven by financial needs, but it can also be for care-giving reasons.

Going forward the economy is likely to drive whether Millennials continue to live with their parents. Financial factors will also influence whether parents move back in with their children. Those numbers may also increase due to logistics including care needs of older generations and the ability for an in-home grandparent to aid with child care.