Please ensure Javascript is enabled for purposes of website accessibility
Log In Help Join The Motley Fool
Free Article Join Over 1 Million Premium Members And Get More In-Depth Stock Guidance and Research
By Dan Caplinger - Feb 7, 2018 at 9:14AM

Find out what the online travel specialist celebrated in its full-year results.

The online travel industry has been extremely competitive, and Trivago (TRVG 2.92%) knows that it needs to ramp up quickly in order to have as big a presence in the sector as possible. Tough conditions in the travel industry have presented additional obstacles in the path of Trivago's growth, but the hotel search company nevertheless made strong strides in 2017 in building its reputation as a major player in travel.

Coming into Wednesday's fourth-quarter financial report, Trivago investors emphasized the importance of revenue growth over profitability at this early stage in the company's existence. Trivago celebrated a landmark achievement in posting its results, but it will be important for the company not to coast on its past success. Rather, it needs to keep building up more positive momentum to cement its position within online travel. 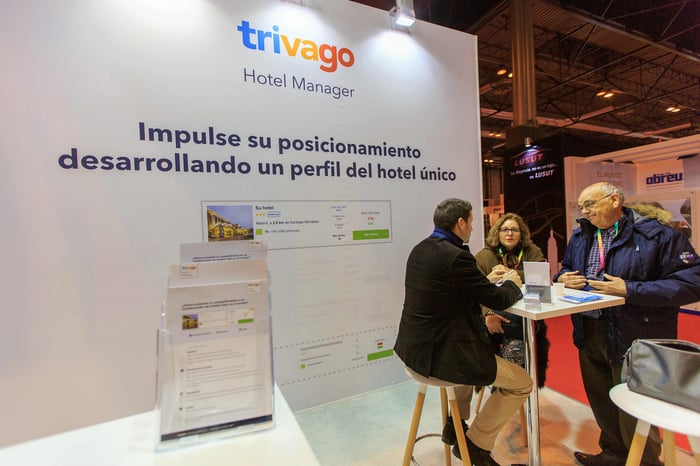 Trivago's fourth-quarter results continued a pattern of slowing growth. Sales rose just 7% to 181.5 million euros, which matched the consensus forecast for top-line gains. Net losses of 9.6 million euros worked out to 0.03 euro per share in red ink, which was slightly worse than the 0.01-euro-per-share figure that most investors were expecting to see.

Yet more bullish investors will want to focus on full-year results, which looked much better. Revenue jumped 37% to 1.04 billion euros, and the company was pleased to have hit the 1-billion-euro mark on the top line. Full-year losses narrowed by three-quarters to just 13 million euros, showing the progress that Trivago has made toward gaining profitability.

Operationally, Trivago saw some of the same trends that have persisted in previous quarters. Qualified referral counts rose by 14% during the quarter to 139.3 million, capping a year of 36% growth for the company. Yet poor revenue trends continued, with revenue per qualified referral falling 7% to 1.27 euros during the quarter. From a geographical perspective, Trivago saw stronger referral revenue and qualified referral counts from the Americas and rest-of-world categories, but developed Europe faced headwinds that weighed on overall growth. Yet revenue per qualified referral was particularly weak in the Americas, and Trivago said that lower levels of commercialization and greater testing activity by major advertisers on its marketplace had a substantial negative impact on that measure.

What's ahead for Trivago?

Particularly troubling for some investors is the fact that Trivago keeps getting increasingly reliant on advertising revenue from companies that could be considered competitors. Priceline Group (BKNG 2.00%) was the source of 44% of total revenue for the year, while Expedia (EXPE 0.52%) made up 36% of revenue. Not only does that leave Trivago open to competitive threats, it also creates vulnerability if its advertisers make moves to enhance their own prospects at Trivago's expense.

For 2018, Trivago has a mixed view that promises improvement in the long run. The first half of the year is likely to be weak, with higher operating expenses weighing on referrals and adjusted operating income. By the second half, however, Trivago expects positive movements in all of its key benchmark metrics, and that should push total revenue for the year up by 5% to 10%. Despite being a huge slowdown from past growth rates, the expected top-line figure is consistent with what analysts following Trivago have been expecting.

Trivago investors seemed a bit disappointed with the realization that the fastest-growth phase for the company might be coming to an end, and the stock fell about 2% in pre-market trading following the announcement. In the long run, though, Trivago still has the chance to innovate in the online travel industry as it looks for ways to balance treating its major advertising customers well against its desire to build a stronger brand identity of its own.