After updating investors on its 2017 financial performance and providing a bullish outlook for its future, shares in AbbVie Inc. (NYSE:ABBV) rallied by 16% in January, according to S&P Global Market Intelligence. 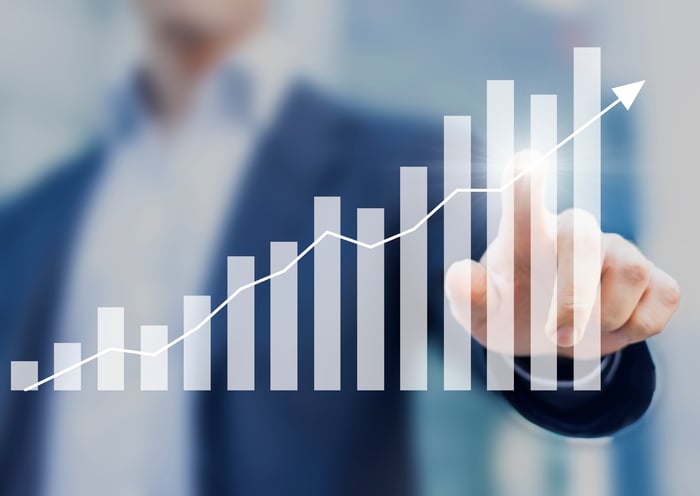 Humira's $18.4 billion in sales accounted for about 65% of AbbVie's total revenue last year, and some of its patents have already started to expire. Nevertheless, management isn't worried. It expects Humira's sales will increase to $21 billion in 2020, giving it time to expand the addressable market for its existing drugs and launch new drugs that can offset any lost sales when competitors finally do arrive.

In 2018, AbbVie thinks that growing demand for Mavyret, its hepatitis C drug, will add more than $1 billion to sales and that Imbruvica, a chronic lymphocytic leukemia drug, will continue to make headway toward its long-term goal of $7 billion per year in revenue. Its endometriosis drug, Elagolix, could begin adding to the top line this year too, if the FDA gives it an OK.

A bit further out, FDA applications for approval for Rova-T, upadacitinib, and risankizumab in small-cell lung cancer, rheumatoid arthritis, and psoriasis, respectively, could be filed in the next year. Those are multibillion-dollar indications, so AbbVie thinks its non-Humira revenue could increase from about $9 billion to $35 billion by 2025 if these drugs win a green light.

If AbbVie fends off Humira lookalikes for a while longer, then investors could be handsomely rewarded. The company's sales growth gives it enviable operating leverage, and that leverage, plus tax reform, gives it plenty of financial flexibility to return more money to investors through dividends.

Since it was spun out as its own company in 2013, AbbVie's increased its dividend by 77%. Yet its cash dividend payout ratio -- a measure of its ability to afford its dividend -- still remains below 50%. With management thinking operating margin can increase to 50% from 34% and predictions for an effective tax rate that's below 13% over the next five years, the odds are pretty good that income investors are going to benefit from putting AbbVie in their portfolios.