Please ensure Javascript is enabled for purposes of website accessibility
Log In Help Join The Motley Fool
Free Article Join Over 1 Million Premium Members And Get More In-Depth Stock Guidance and Research
By Daniel Miller - Feb 8, 2018 at 7:04AM

Here's an explanation of what figures investors should focus on for General Motors' earnings results.

Investors have been cautious about investing in Detroit automakers at a time when the world's most lucrative and profitable auto market, North America, has plateaued in sales this cycle. The good news for investors in Detroit's largest automaker, General Motors (GM 5.55%), is that solid financial results are still rolling and management expects that to continue into 2019. Let's recap the company's important fourth-quarter figures and highlight some key takeaways.

Which figures tell the story?

GM's top line felt some pressure with sales plateauing in the U.S., declining 5.5% to $37.7 billion during the fourth quarter compared with the prior year. But investors glancing at the bottom line will probably raise an eyebrow -- which brings us to our first key takeaway for investors: focus on the adjusted figures.

During the fourth quarter, GM's net income was a whopping $4.9 billion loss, which was a staggering $6.8 billion lower than the prior fourth-quarter result. The culprit was a $7.3 billion non-cash charge related to the remeasurement of deferred tax assets because of the U.S. tax reform. Adjusting for that massive charge shows a clearer picture of GM's underlying business. GM's EBIT-adjusted earnings checked in at $3.1 billion, or $1.65 per share, which was a strong 18.7% increase over the prior year's fourth quarter and far above analysts' estimates calling for $1.38 per share. 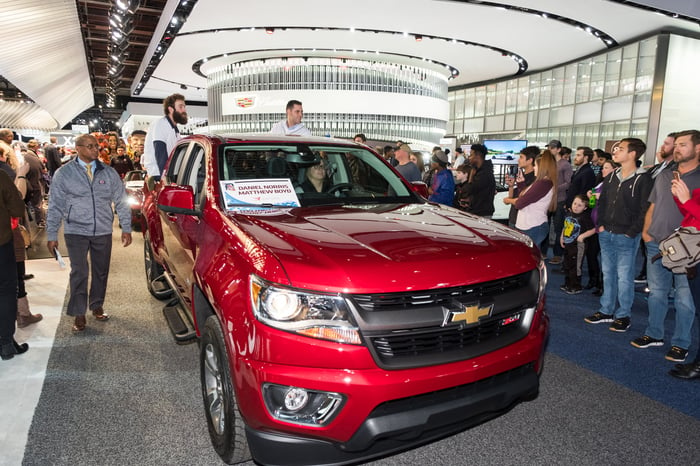 One of Ford Motor Company's (F 3.89%) largest competitive advantages of GM in recent years was its very profitable Ford Credit segment. In fact, that's normally Ford's most profitable entity outside its lucrative North American region. General Motors was forced to sell its financial division after it was crippled by the past recession, but it has since purchased another finance arm and has slowly built it up to generate incremental revenue and profits.

GM Financial generated record full-year revenue of $12.2 billion and also posted a record EBIT-adjusted result of $1.2 billion, a strong 50% gain over 2016. For context, GM International, which groups many of GM's regions outside North America, including the quickly growing Chinese market, generated $1.3 billion EBIT-adjusted during 2017, just slightly more than its financial division.

What's important for investors to realize is that GM Financial still has plenty of room to boost the company's total bottom line in the years ahead. Consider that for the full year 2017, GM Financial penetrated only 41% of GM's retail sales, and only 39% in the U.S. market specifically. As GM continues to increase penetration of retail sales its receivables will increase and so will its top- and bottom-line contributions. It's a great way for the company to generate incremental revenue and profits at a time when sales are slowing.

Despite plateauing total sales and a passenger-car segment that has been plagued with large sales declines, GM has managed to improve its margin thanks to an increasingly tilted mix toward SUVs and trucks. In fact, GM's North American margin reached 10.7%, which marks the third consecutive year margin topped 10%.

Even GM's EBIT-adjusted margins from continuing operations -- which includes regions less lucrative than North America -- improved 170 basis points to 8.2% during the fourth quarter and reached 8.8% for the full year. If you had told Wall Street eight years ago those would be the margins GM would be posting for 2017, analysts would have called you crazy.

Again, the good news for investors is that GM should have some momentum behind its improved margin. The momentum will come from the 2018 introduction of its all-new full-size trucks, the Chevrolet Silverado and GMC Sierra. Detroit's largest automaker will also benefit throughout 2018 thanks to a full-year volume of the ongoing crossover launches that include the Chevrolet Traverse, Buick Enclave, and GMC Terrain.

The grand-scheme takeaway for investors eyeballing GM's near term is that the company is so far successfully offsetting slowing sales by focusing on a higher-margin sales mix, introducing key new vehicles, and increasing GM Financial's retail penetration -- and it's working well.