Please ensure Javascript is enabled for purposes of website accessibility
Log In Help Join The Motley Fool
Free Article Join Over 1 Million Premium Members And Get More In-Depth Stock Guidance and Research
By Daniel B. Kline - Updated Feb 8, 2018 at 2:41PM

The company has cut its menu in part to get ready for a revived p.m. push.

When your core brand offering consists of coffee and bakery products traditionally consumed in the morning, it's going to be hard to drive traffic later in the day. That's a conundrum that both Starbucks (SBUX -0.55%) and Dunkin' Brands (DNKN) have battled with mixed success.

Starbucks failed in its efforts to use beer and wine to lure customers in later in the day. It also failed at launching a soda line created at least partly to get customers to visit in the afternoon and evenings. Now, the chain has been slowly rolling out its Mercato lunch menu, which includes ready-to-eat salads, sandwiches, and various side items. It's too early to say if those efforts will work, but history says success may be hard to come by.

Dunkin', which successfully devoted 2017 to driving morning sales, has also struggled in the afternoon. Over the past years, it has tried everything from soup and sandwiches to pizza and apple pie. None of it has worked well, and now the company has a new strategy to drive afternoon sales on tap for 2018. 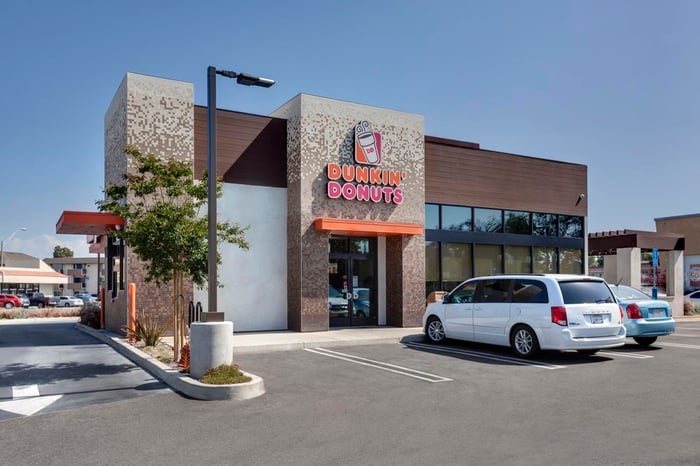 What is Dunkin' doing?

Now that it has taken care of its morning business, Dunkin' appears ready to turn its attention back to afternoons. The chain's president for the United States and Canada, David L. Hoffmann, shared some of those plans during the Q4 earnings call:

Going into 2018, we are actively working to drive afternoon traffic through afternoon-leaning beverages and food along with all-day value offers. With our new simplified menu slated to be rolled out nationally by the end of March, we can now shift our focus to developing revamped, easier-to-execute afternoon offerings that will reinvigorate our p.m. business and build off of our morning success.

One of the promotions the company has been testing in the afternoon is "Happy Hour." That's a pretty straightforward offer where customers can get a medium latte for $2 between 2 p.m. and 6 p.m. That's a deal not unlike what Starbucks does with its Frappuccino happy hours, where it sells the sweet treats for half off on select afternoons.

During the Dunkin' earnings call various executives cited "menu innovation" as being a traffic driver for 2018. Hoffman also explained that part of the reason the company simplified its menu by getting rid of a number of slower-selling items in 2017 was in order to make room for afternoon-specific products in 2018.

"We've kind of teased out to that we've taken a number of items off of the menu in an effort to accelerate and accentuate our advantages around speed and convenience," he said. "And this is just a reset so that we can move on with the different types of offerings and product innovation specifically around the p.m. daypart."

Part of the simplification effort involved taking some slow-moving afternoon items off the menu. Travis described those as "overly complex and low movers," which does not fit the chain's positioning going forward.

"Our best positioning is we believe Dunkin' is built again around speed, convenience, accessibility," said Hoffman. "We're looking for and we're tapping into the consumer who wants a pit stop in Dunkin'. Get in, get out, get on your way."

Neither Dunkin' nor Starbucks has found a product that drives afternoon traffic on a long-term basis. Both, however, have continued to try and use limited-time-offers, promotions, and special deals for loyalty program members to push consumers to visit during their slower hours.

Dunkin' clearly intends to keep looking for that magic food or beverage item that changes consumer behavior. That's a smart strategy, but also a challenging one that will probably require a lot of failures before the right mix is discovered.