Shares of Patterson-UTI Energy, Inc. (PTEN -4.00%) are getting pounded on Thursday and were down more than 14% at 2:45 p.m. EST after the onshore drilling contractor reported fourth-quarter results at market open this morning.

While the company said that revenue skyrocketed 219% year over year to $787 million -- which was $23 million ahead of expectations -- it still lost money after adjusting for a big one-time gain due to the changes in the U.S. tax law. Overall, it reported an adjusted loss of $0.10 per share, which was $0.02 per share more than the consensus estimate. It's not the only onshore contract driller to remain in the red as rival Helmerich & Payne (HP 1.04%) also didn't turn a profit last quarter after adjusting for a similar one-time boost from the tax change. That said, Helmerich & Payne did manage to beat the consensus estimate since its loss came in $0.11 per share less than analysts feared. 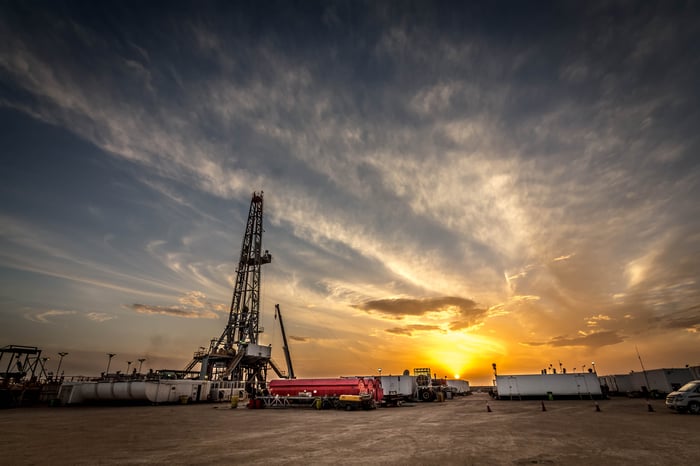 "Despite widespread concerns for lower industry drilling activity, our rig count rebounded through the quarter. Even with the typical holiday slowdown in Canada, our rig count at the end of the year was near the highest level of 2017," according to CEO Andy Hendricks. He further noted that the average rig margin per day increased $280 versus the third quarter as better pricing more than offset higher costs. That said, while the quarter was certainly a step in the right direction, investors expected more.

Meanwhile, there's some concern about what lies ahead. Patterson-UTI noted that while it had 96 rigs running under contracts during the first quarter of 2018, it only had contracts supporting an average of 67 rigs for the full year. As a result, if oil prices take a tumble, Patterson's financial results could follow.

Despite a big uptick in shale drilling over the past year, profits remain elusive for contract drillers like Patterson-UTI and Helmerich & Payne. That tide could turn this year as long as oil prices hold up. However, investors should brace themselves for a bumpy ride, especially if oil price volatility returns.