The news is out, and the news is not good -- Plug will miss estimates.

Don't say you weren't warned. When Plug Power (PLUG 2.02%) stock popped nearly 8% yesterday on no news, I suggested the pop might be explained by investors rushing to buy the stock before Plug had a chance to update its guidance in a planned Thursday morning conference call. I also warned that the news might not be all those investors had hoped to hear.

Well, the news is out now, and Plug Power has given up all of Wednesday's gains, and more, closing the day down 13.1%. 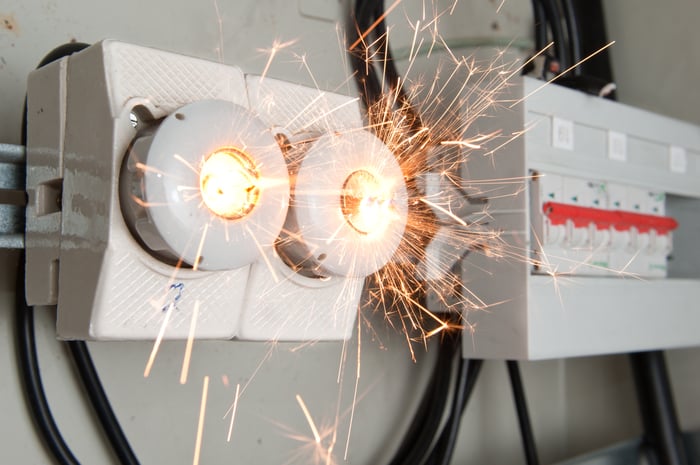 So what happened to vaporize yesterday's gains, and drive Plug's price back down? TheFly.com listened in on the call and has the details. Let's run them down for you.

According to Plug management, its upcoming fourth-quarter earnings report will show sales "above $30 million." That sounds good, but it may not be enough to match analysts' consensus prediction of $32 million in Q4 sales. Worse, "adjusted gross margin" earned on these sales will be a bare 3%, meaning Plug barely broke even on just component costs alone -- and definitely didn't earn a net profit.

Worse than that, Plug went on to predict that in the fiscal first quarter of 2018, its revenues will plunge sequentially to as little as just $22 million to $24 million. When you consider that Wall Street had been forecasting sales of $38.4 million for Q1, it looks like Plug investors are staring at a potential 40% sales "miss" in the coming quarter. Adjusted gross margins will probably be negative 11% to 13%. And yes, you guessed it -- Plug Power will earn no profit next quarter, either.

In fact, it kind of looks like we can write off the whole year for Plug, as the company further forecast sales for the year of no more than $180 million. Whereas Wall Street was hoping to see at least $215 million in sales, this means Plug Power is likely to keep on missing earnings all year long.

Long story short, it sure was more fun to be a Plug Power investor yesterday. But at least now you know what to expect for the rest of the year.