Please ensure Javascript is enabled for purposes of website accessibility
Log In Help Join The Motley Fool
Free Article Join Over 1 Million Premium Members And Get More In-Depth Stock Guidance and Research
By Rich Smith - Feb 9, 2018 at 11:33AM

What's small beans for these defense contractors is a big investment for Finland.

Finland's navy is not the world's strongest.

Comprising only a few dozen ships -- mostly auxiliary vessels -- Finland's strongest surface combatants are a fleet of eight Rauma- and Hamina-class corvettes. But while small in number, those few combatants are about to get a major upgrade in firepower.

We know this because earlier this week the Defense Security Cooperation Agency, which is the Pentagon arm charged with overseeing sales of military equipment to U.S. allies, notified Congress of a request from Finland to acquire more than 180 new surface-to-surface and surface-to-air missiles for the Finnish fleet. 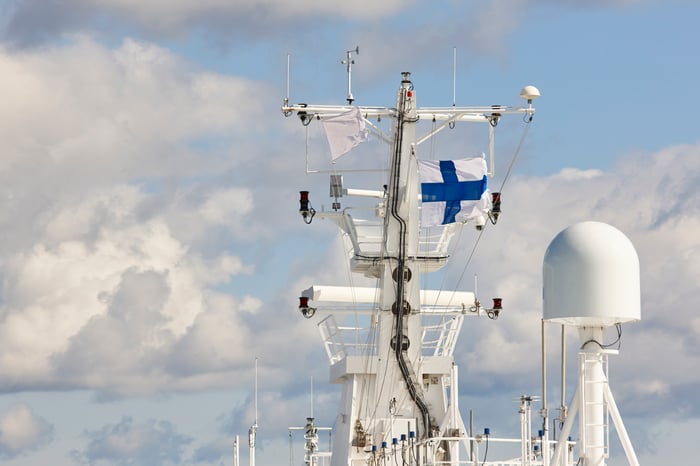 Specifically, Finland wants to acquire 68 Evolved SEASPARROW anti-aircraft missiles (and ancillary equipment) from prime contractor Raytheon (RTN), and a further 112 Harpoon Block II anti-ship missiles from Boeing (BA 2.28%). 100 of the latter missiles will be Boeing's latest iteration of the venerable Harpoon, "Harpoon Next Generation" missiles featuring a smaller warhead than the original but more than twice the range -- more than 150 nautical miles.

In total, these two arms sales announced this week promise to produce as much as $737 million in new revenues for the defense contractors. Raytheon's flagship Missile Systems unit, the company's largest business by revenue, produces the SeaSparrow. It will share part of the $112.7 million in revenue from the SeaSparrow sale with its partner BAE Systems (BAES.Y 1.33%), which will be providing the Finns with "quad pack" cannisters to hold the missiles. Boeing should retain the bulk of the $622 million generated from the sale of its missiles in its Defense, Space and Security business, Boeing's second most profitable by margin.

A big bet on missiles

For the U.S. contractors, the revenues to be produced from improving Finnish armaments amount to little more than a rounding error. Last year, Boeing boasted total revenues in excess of $93 billion -- $21 billion from its defense business alone, as reflected in data from S&P Global Market Intelligence. Even Raytheon, a much smaller, dedicated defense business, produced revenues of more than $25 billion. Finland's SeaSparrow purchase will amount to less than one half of one percent of Raytheon's revenue haul.

But for Finland, these missile purchases represent a major investment. In addition to arming its existing fleet with new missiles, you see, Finland also expects to install both the Harpoons and the SeaSparrows aboard its new fleet of four "Squadron 2020" multi-role corvette warships, which will begin replacing Finland's aging Rauma-class vessels in 2020.

Finland has budgeted $1.5 billion to pay for what it calls "the Squadron 2020 project." Thus, roughly half the cost of building the ships themselves will be spent on just the missiles to arm them.

Even if this is not a huge revenue boost for Raytheon and Boeing, it's telling that Finland has chosen to hand over so large a portion of its military upgrade funds to just these two companies, rather than going with a perhaps less costly provider. This speaks to the quality of Raytheon's and Boeing's offerings -- and to the companies' prospects as well.