In a bold and unprecedented move, the misbehaving bank will be prohibited from growing its assets.

Wells Fargo (WFC 1.92%) was stunned by a blow dealt by the Federal Reserve at the beginning of February. In an unprecedented move, the Fed has prohibited the bank from growing its assets from the level they reached at the end of 2017, among other penalties.

This is a crushing sanction from the regulator, and it's going to send Wells Fargo reeling. 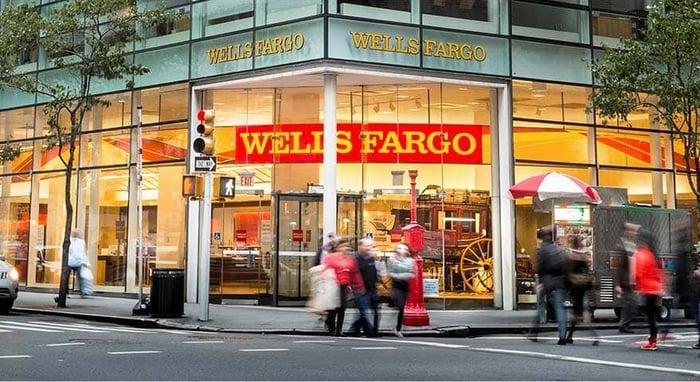 This is not, of course, a surprise. Wells Fargo's reputation has been in the doghouse since late 2016, when it was discovered that the bank opened millions of new accounts for existing customers. That wouldn't be a problem, except those clients apparently neither requested nor authorized them. Before long, it came to light that this "fake accounts scandal" was more widespread than first reported. All told, the bank admitted that around 3.5 million bogus accounts were created.

Wells Fargo soon dropped the ball again, and more than once. It was also accused of malfeasance with auto insurance products and, worse, mortgages -- a crucial segment for the company.

All of this seems to have eroded customer trust, as growth in most of the bank's key line items has been sluggish. In the company's Q4, its top line grew by only 2% on a year-over-year basis. The preceding three quarters featured either decreases or flat-line growth.

Q4 per-share net profit rose only slightly, while loans and deposits declined by 1% and 2%, respectively. The company's efficiency ratio, once the envy of Big Banking, shot up 10 percentage points to 76%.

Contrast that with the Q4 performance of, say, fellow giant lender JPMorgan Chase (JPM 1.28%). The bank increased both its "managed" (i.e., adjusted) net revenue and its deposits by 5%, and its loans by 4% in its Q4, even if adjusted net profit slipped 1% during the period. Its efficiency ratio was 60%.

A still-thriving economy, among other factors, has been making life good for American banks of late; JPMorgan Chase's encouraging Q4 performance wasn't unusual for the sector. But Wells Fargo has been a laggard, and not only in terms of fundamentals. Here's how its stock did in 2017: 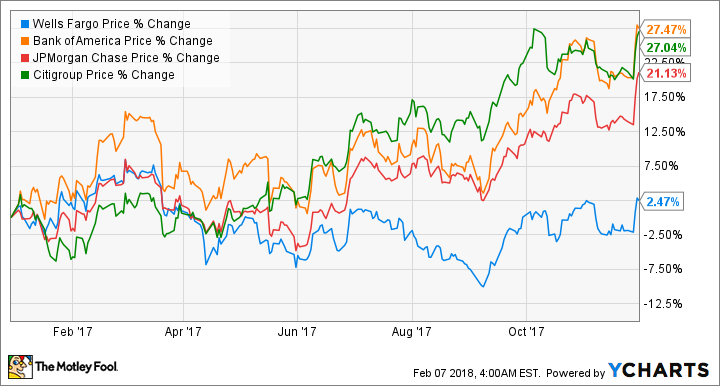 Wells Fargo needs to improve, and now. Unfortunately, it's been punched to the ground by the Fed, and it probably won't get up anytime soon.

More than many kinds of enterprises, banks depend on their asset bases (loans are classified as assets, after all) to make money. It'll be one heck of a challenge for Wells Fargo to squeeze out growth in net profit under such conditions -- and for an indeterminate amount of time, as per the Fed's order. Good luck with that.

I feel the scandals are the result of a corporate culture that turned bad at some point (perhaps when the bank started pushing customers to sign up for additional services). That's worrying, because it can be tough to turn around a big organization that goes to the Dark Side.

Also, a penalty of this scope will further diminish the bank's reputation, and that means customer abandonment. Every scandal and sanction increasingly paints Wells Fargo as The Bad Bank.

The likes of JPMorgan Chase and Citigroup (C 1.91%) have done some questionable things in the past, and they've been punished, but never as badly as this. With cleaner reputations, they should be able to scoop up some Wells Fargo defectors.

As we came to the end of 2017, in the wake of those scandals I wrote that I didn't think Wells Fargo would have a solid and productive 2018. That's looking like quite the underestimation now.