Please ensure Javascript is enabled for purposes of website accessibility
Log In Help Join The Motley Fool
Free Article Join Over 1 Million Premium Members And Get More In-Depth Stock Guidance and Research
By Matthew Cochrane - Feb 10, 2018 at 10:32AM

Lowe's is one of the best retailers in the business today. The only problem? Its primary competition is better.

In 1962, a year after Lowe's Companies, Inc. (LOW 1.54%) went public, the hardware chain operated 21 retail locations and reported annual revenues of $32 million. Fast-forward 56 years, and Lowe's runs 2,370 stores and has revenue over the trailing 12 months of about $69 billion. As evidenced by these remarkable numbers and a dividend Lowe's has increased in each of the past 56 years, few companies have given investors such sustained success delivered over decades of growth.

Lowe's successful run doesn't appear to be in danger of ending anytime soon. In its most recently completed quarter, sales grew to $16.8 billion, a 6.5% increase year over year, and adjusted earnings per share rose to $1.05, a 19% increase year over year. Sales growth was fueled by a comparable sales increase of 5.7%. By nearly any metric, Lowe's is a company that has managed to thrive in a tough retail environment.

Far from resting on its laurels, Lowe's is continuing to search for ways to make its business leaner and meaner. In recent conference calls, Lowe's management outlined three ways it hopes to generate greater returns for shareholders moving forward: (1) Increase its outreach to Pro customers, (2) improve its omnichannel capabilities, and (3) increase efficiency in its supply chains. 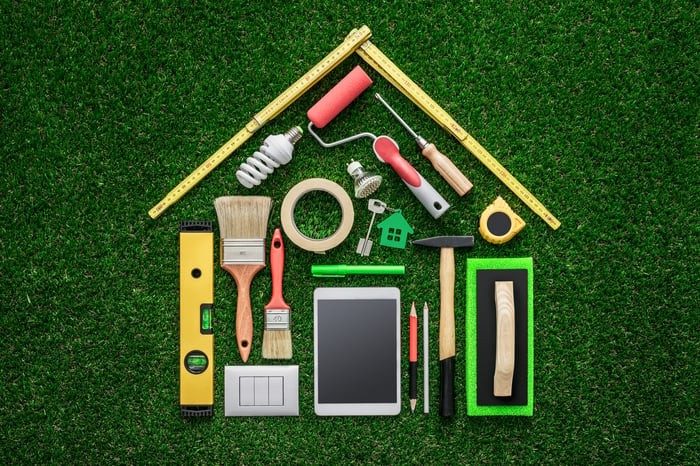 All of the initiatives management outlined above sound promising and, I believe, will drive growth in the quarters ahead. But every time I think about initiating a position in Lowe's, one nagging thought keeps me from doing so: Home Depot Inc. (HD 1.75%) always appears to be one step ahead of its home-improvement rival. In fact, all these initiatives are steps in the right direction, and they also illustrate how Lowe's is still behind the times when compared with its larger competitor. Let's take a closer look at what Lowe's hopes to accomplish in these areas, why the steps are all good in and of themselves, but also how they demonstrate Lowe's is still lagging Home Depot in several key areas.

Lowe's simply defines its Pro customer as "professional customers" and labels them as coming from two broad categories: construction trades and maintenance, repair, and operations (MRO). This segment is especially important because Pro customers visit home-improvement stores more often than DIY weekend warriors and spend more per average visit. Pro customers represent about 30% of Lowe's overall business, and sales growth to Pro customers is outpacing the company's overall sales growth. At the 2017 Goldman Sachs Global Retailing Conference, Lowe's management stated this percentage could grow to as high as 35% in the next five years.

In 2017, Lowe's finalized two acquisitions to better reach the MRO market: Central Wholesalers and Maintenance Supply Headquarters. Lowe's is currently integrating these two companies before turning to the task of integrating the combined entity's offerings with its store locations. Lowe's offers an exclusive website for its Pro customers, LowesforPros.com, and offers special fulfillment options for Pros, such as two-hour delivery time window options. 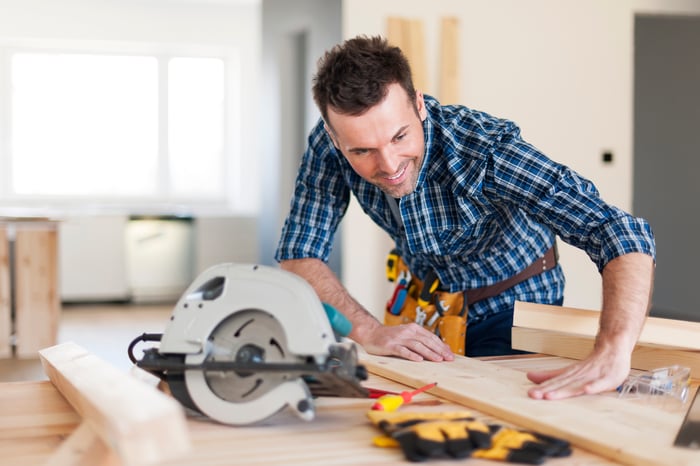 Still, despite all the company has done, Home Depot remains firmly in the lead in reaching Pro customers. Pros make up 40% of Home Depot's business, a greater percentage than Lowe's sees itself achieving in the next five years. And while Lowe's says its Pro growth is outpacing its overall sales growth, Home Depot's Pro business appears to be growing even faster. In Home Depot's 2017 first-quarter conference call, management said that Pro sales were growing double the amount of DIY sales, and that this gap only widened in the second quarter. In the third quarter, management stated Pro sales were again "outpacing" DIY sales growth.

Omnichannel is the latest retail buzzword and simply means retailers will look for ways to combine its brick-and-mortar with their online operations to deliver the best possible shopping experience to their customers. Lowe's is certainly no slouch in this arena. In its latest quarter, Lowe's online sales increased 33% year over year. Lowe's has not broken out how much of its total sales its e-commerce operations represent, but in 2016 it was 3.5% of all sales. In the third-quarter conference call, COO Rick Damron said:

We are leveraging our investments in Lowes.com, providing an upgraded online shopping experience with enhanced functionality and display for touch screen devices to deliver an optimized mobile experience; improved product and content recommendations; refined search algorithms; optimized assortments informed by digital earned reviews; and expanded product views, including video content. Along with our flexible fulfillment options of "Buy Online, Pick Up in Store" and "Buy Online, Deliver from Store" and our enhanced digital marketing, our efforts combined to drive online comp growth of 33%.

Damron went on to add that the company was working on further capabilities like adding inventory and order statuses. Yet for all its success in online retail, Lowe's is still playing catch-up to Home Depot in this area too. Home Depot's online sales now represent 6.4% of total sales, and for four consecutive years, the company has grown its online sales by approximately $1 billion. At its recent investor and analyst day, an analyst stated that 60% of all store traffic starts with a digital experience, and digital "visits" now almost equal in-store transactions.

In the third-quarter conference call, Damron said the supply chain is "another productivity focus area", one that offers to "streamline cost." Damron continued, "For example, we are working to consolidate freight shipments from both in port and domestic freight to drive greater efficiency and optimize the flow of inventory, significantly reducing the number of trucks arriving at our distribution centers and stores, allowing us to reinvest labor in others areas."

This is another area Home Depot has targeted previously and has seemingly already accomplished what Lowe's wants to in an effort Home Depot dubbed its Supply Chain Synchronization. At the 2017 Oppenheimer Consumer Conference, Executive Vice President of Merchandising Ted Decker said:

[Y]ou've heard us talk about our Supply Chain Synchronization. ... [I]t's a multiyear journey for us to ultimately do joint business planning with our supplier base, joint forecasting, order expectations and timing, synchronized transportation, synchronized flow of product into the store to the shelf and having that just one seamless, end-to-end supply chain.

Decker said the focus on a streamlined supply chain lowers costs and improves on-shelf inventory availability. Because of this focus on efficiency, Home Depot now only requires two trucks for the same amount of supplies that previously required three. Home Depot goes so far as to provide specific instructions to its employees on how to load and unload trucks, including a map of where workers should stand around the conveyor belt as the truck unloads.

Over the past three years, Lowe's has provided market-beating returns to shareholders, gaining 55% to the S&P 500 index's 41% and, over time periods of five and 10 years, that gap only widens. Investors certainly have nothing to complain about -- except that these returns are not quite as great as Home Depot's. 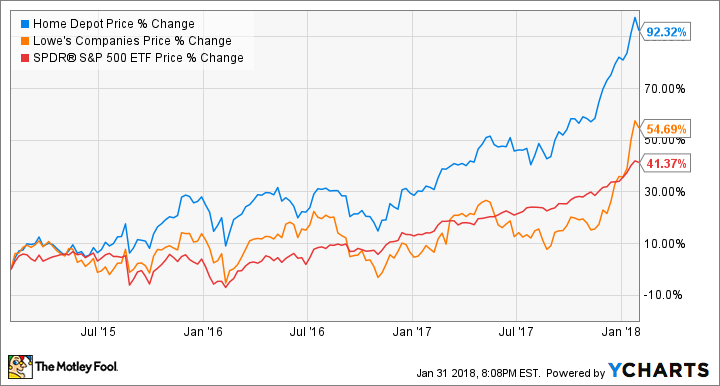 Clearly, Lowe's can't be accused of not working on innovation and staying on top of the latest retail trends. It just can't seem to keep up with its biggest rival.

However, there is one area where Lowe's definitively beats Home Depot -- valuation. Given its trailing-12-month earnings per share of $4.51, Lowe's currently trades at a P/E ratio of 23.8. Home Depot trades at a steeper P/E ratio of 28.8. While some investors may disagree, I have happily decided to invest in Home Depot over Lowe's. All things being equal, I will happily pay a slight premium for a great company. To butcher one of my favorite Warren Buffett quotes, better to pay a fair price for a wonderful company than a slightly more fair price for a pretty good company.