The bad news continues for the burrito chain.

Shares of Chipotle Mexican Grill, Inc. (CMG 3.06%) dove after the company's latest earnings report this week, and it's easy to see why. The numbers were disappointing across the board, but even worse, management seems to have no plan to fix things.

Comparable sales increased a measly 0.9% in the fourth quarter 2017 at a time when the company is still lapping the plunge in sales from the E. coli crisis, and customer visits in the quarter actually fell 3% as the company appears to still be suffering from the July Norovirus incident that forced the temporary closing of a single location in Virginia. The rise in sales was instead due to a price increase, which is not a sustainable way to grow revenue.

Overall revenue increased just 7.3% as the company slowed its pace of new store openings, and restaurant-level operating margin improved only 140 basis points to 14.9%, a far cry from the 26.6% margin it had in the fourth quarter of 2014 before the E. coli outbreak. Not surprisingly, earnings per share were also down nearly 70% from that period. In other words, Chipotle is still in the midst of a crisis, more than two years after customers began fleeing over E. coli concerns. 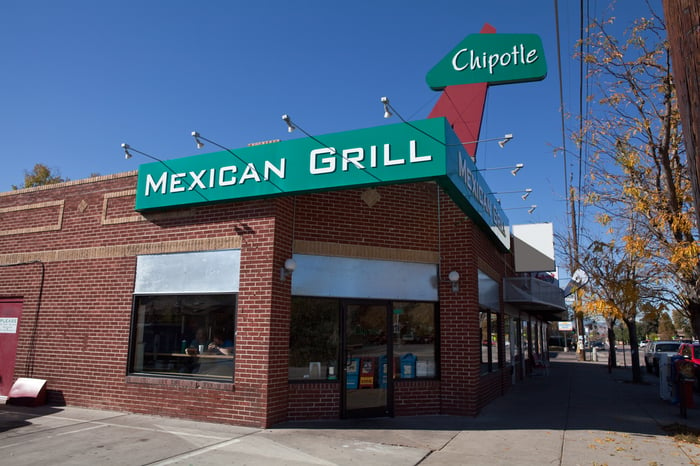 Chipotle shares spiked two months ago when the company announced it was looking for a new CEO and that founder Steve Ells would step aside to become Executive Chairman. The market's reaction seemed cathartic after two years of Chipotle's struggles following the E. coli outbreak, but Ells had no update on the search process during the earnings call and management had few ideas to drive growth. CFO Jack Hartung even said that transactions were likely to be negative until July, when the company laps the Norovirus incident from a year ago, explaining why the company guided for low-single-digit comparable sales in 2018. When your biggest growth driver is waiting for bad news to stop affecting comparisons, you have a problem, especially when your stock is trading at a P/E ratio of 50.

Ells explained on the call that while investors and analysts regularly ask about new menu items to boost the brand and the company has a test kitchen devoted to such products, it's tricky to add new dishes due in part to the restaurant's assembly line format. There is only so much room on the serving line, which is partly why the company got rid of chorizo to make room for queso.

The one new idea Chipotle did share on the call was to redesign its restaurants. Management said for the first time ever the company would invest more capital in its current store base than in new stores, and that it would double the amount it spends on per-restaurant upkeep to $20,000 this year. The company also said it would invest $10 million into new restaurant prototypes, which will inform new openings and remodels in 2019 and 2020.

Still, Stifel analyst Chris Cull pointed out that the average restaurant remodel costs $250,000 to $500,000, and argued that Chipotle's initiative is too small to have a meaningful impact.

A wider field of competition

Chipotle may have problems beyond its own quixotic challenges. While the company has been spinning its wheels, trying to buff its tarnished brand, competitors large and small have been moving forward. Much in the way that Starbucks has been forced to defend itself from so-called third-wave coffee shops, Chipotle may face a new threat from younger fast-casual chains.

In many ways, Chipotle pioneered the fast casual industry, showing that good food could be served fast, and leveraged the power of the assembly line in restaurants. But its success has spawned a slew of imitators. There are fast-casual salad chains like Chop't and Sweetgreen, burger businesses like Shake Shack, Habit Restaurant, and Smashburger, and even other fast-casual burrito chains like Dos Toros, Freebirds, and Torchy's Tacos.

While Chipotle is busy soul-searching, New York-based Dos Toros, which opened its first location in 2009, has been in the midst of a growth spurt. The company expanded to its second city, Chicago, late last year, and plans to add five more restaurants this year on top of the 15 it already has. Co-CEO and co-founder Leo Kremer told me he considers himself a fan of Chipotle, but believes that it's harder for a company the size of Chipotle to innovate than for smaller companies like his own. He also thinks the quality of fast-casual cuisine has gone up so much, especially in cities, that the market is so much more competitive than it was when Chipotle first started out.

With only 15 locations, Dos Toros is not going to be a direct threat to Chipotle anytime soon, but it's emblematic of the shift in the market, as consumers and Chipotle's own customers have many more choices than they did 10 or 20 years ago. That threat, as much as anything else, may be spiking Chipotle's hopes of returning to glory.

With the competitive landscape changing, it's crucial that the burrito chain find a way to refresh its brand and regain some of its former appeal. Restaurant redesigns might be a good start, but the company needs something bolder to have a meaningful impact. Without it, the stock will likely continue to swoon.