Please ensure Javascript is enabled for purposes of website accessibility
Log In Help Join The Motley Fool
Free Article Join Over 1 Million Premium Members And Get More In-Depth Stock Guidance and Research
By Timothy Green - Feb 11, 2018 at 8:10AM

Impressed by Amazon's latest quarterly report? You shouldn't be.

E-commerce and cloud computing giant Amazon.com (AMZN 3.66%) blew past analyst estimates when it reported its fourth-quarter results earlier this month. Not only did revenue grow faster than expected, but the bottom line also surged. Operating income jumped nearly 70% year over year thanks to extremely strong holiday sales and a solid performance from Amazon Web Services.

If you found yourself impressed and awestruck by Amazon's results, get ready for a reality check. Amazon's profitability, as measured by return on invested capital, is miserable compared to its peers. The mountains of cash Amazon is hurling into its business each and every quarter may be driving incredible revenue growth, but it's not paying off where it counts.

What is return on invested capital, or ROIC? It's a measure of the return a company gets for investing in its business. It's defined as follows:

ROIC is a somewhat fuzzy number, because it depends on what you define as "excess cash." Every company needs some cash on hand to run its business, but it's not always easy to figure out exactly how much. Amazon, for example, has nearly $31 billion of cash and investments on its balance sheet. Only some of that is truly excess.

To make comparisons simpler, I'll calculate two different ROIC numbers for Amazon and its peers. The first will back out all the cash on the balance sheet, while the second will back out none of it. I'll compare Amazon's ROIC to fellow retailers, including Walmart, Target, Costco, Best Buy, and Kroger , as well as tech giants Microsoft, International Business Machines, Alphabet, and Oracle.

Here's the result for the first ROIC, with cash entirely backed out of invested capital: 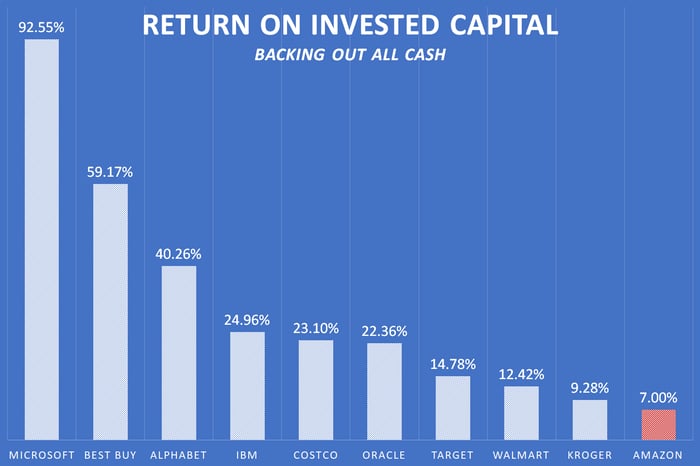 And here's the result for the second ROIC, with no cash backed out: 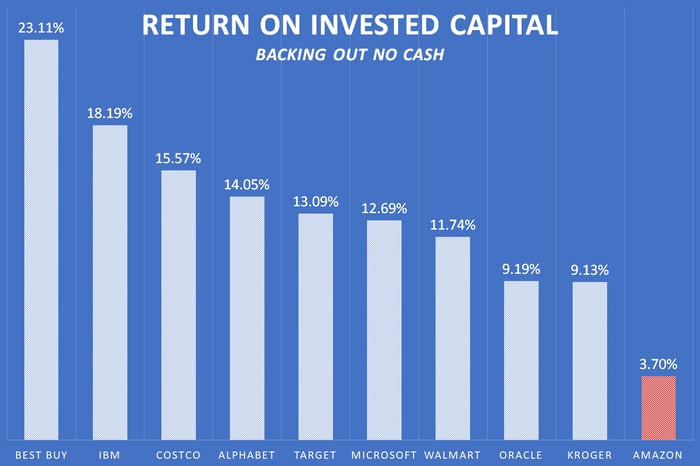 Even backing out all of Amazon's cash, which inflates its ROIC, the company generates a measly 7% return on the money it throws into its business. That's far lower than every other company considered. When none of the cash is backed out, Amazon's ROIC drops below 4%.

Because Amazon's cloud computing business is so profitable and, presumably, generates a ROIC higher than the company as a whole, the retail business generates a ROIC lower than the company as a whole. One reason is Amazon's heavy investments in its international business. The international segment posted an operating loss of over $3 billion in 2017, wiping out the operating profit of the North American segment.

What does this mean? Amazon's investments in its retail business are producing abysmal returns. Plenty of revenue, but little in the way of profit. The international business has a negative ROIC at the moment. Will those investments ever pay off? Who knows.

Amazon's prolific spending is doing wonders for its top line. But given its lousy return on invested capital, there's little reason to celebrate the company's meager bottom line.