Please ensure Javascript is enabled for purposes of website accessibility
Log In Help Join The Motley Fool
Free Article Join Over 1 Million Premium Members And Get More In-Depth Stock Guidance and Research
By Rick Munarriz - Feb 12, 2018 at 10:07AM

China's leading microblogging platform is growing quickly, but that may not be enough when it reports Q4 results this week.

Weibo (WB -1.07%) has pulled off quite the feat, seeing its stock more than double in back-to-back years. China's social media speedster is rolling, and we'll get a good indication if Weibo has the potential to double yet again in 2018 when it reports quarterly results on Tuesday morning.

Expectations naturally run high for Weibo, but in a climate where China's restrictive government isn't afraid to clamp down on thriving businesses when it feels censorship is necessary, challenges remain for even the market darlings. Let's go over some of the things that can sting the stock after Weibo steps up with fresh financials this week. 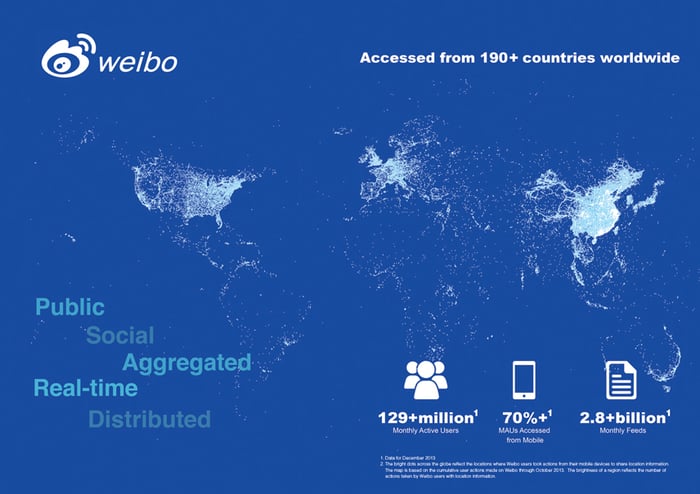 Blow the market away and stock gains tend to follow. We've seen Weibo continuously land ahead of analyst profit targets during the past two years of the stock doubling. The past year has been particularly noteworthy.

Analysts are holding out for a profit of $0.58 a share in Tuesday's report, a big step up from the $0.34 a share that it rang up a year earlier. Weibo only provides revenue guidance.

Weibo will naturally need to surpass $0.58 a share to keep its impressive streak of beats going, but it also has to make sure that its top-line outlook and any insight into how margins are holding up find analysts confident in their 2018 forecasts.

Another major component of Weibo's monster run has been accelerating growth. Year-over-year revenue gains have increased for seven consecutive quarters, culminating with a jaw-dropping 81% surge last time out.

The streak should end this time. Weibo's guidance three months ago was calling for $355 million to $365 million in revenue for the fourth quarter, up 67% to 72%. Weibo would have to land well ahead of its range to keep the top-line upticks accelerating, but Weibo's been up to the task before. The $320 million it delivered during the third quarter was comfortably ahead of the $290 million to $300 million it was modeling just three months earlier. It's going to need another beat on the top line, especially since investors have been spoiled by the guidance lowballing in the past.

Running a fast-growing microblogging platform in one of the most vigilant countries can have its setbacks. Just last month, we saw the Cyberspace Administration of China order Weibo to temporarily shut down some of its portals for spreading obscene and unauthorized content.

Weibo and its peers run into these kind of hiccups from time to time. The latest episode took place several weeks after the end of the fourth quarter, but it could weigh on the revenue guidance it offers on Tuesday morning.