Please ensure Javascript is enabled for purposes of website accessibility
Log In Help Join The Motley Fool
Free Article Join Over 1 Million Premium Members And Get More In-Depth Stock Guidance and Research
By Natalie Walters - Feb 12, 2018 at 8:46AM

Apple's 2018 Q2 guidance may have been disappointing, but its Q1 results broke all sorts of records.

Apple (AAPL 1.62%) investors weren't thrilled about the lower-than-expected guidance for the 2018 second quarter, but they still have a lot to celebrate from the first-quarter earnings report.

The Cupertino, California-based tech giant provided guidance for second-quarter revenue in the range of $60 billion to $62 billion, lower than analyst expectations for $65.73 billion.

However, it was far from a disappointing quarter, considering that Apple reported four all-time records, including net income and overall revenue. The record-breaking results were fueled by record iPhone revenue, thanks to the higher prices on its smartphone lineup.

If you need more reasons to buy Apple stock, here's an overview of the record highs from Apple's 2018 first-quarter earnings report. 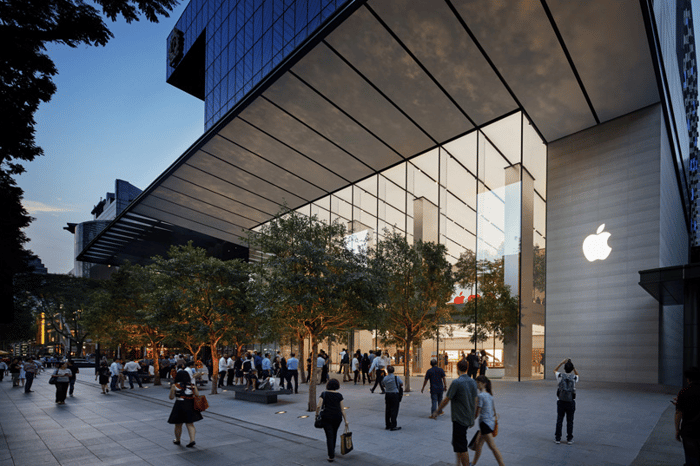 Apple managed to report its highest-ever quarterly iPhone sales revenue, despite selling nearly one million fewer smartphones compared to the first quarter of 2017 -- simply because its iPhones are more expensive now. The average sales price for an iPhone jumped to $796, up from $695 a year ago, according to Apple.

Apple sold 77.3 million iPhones during the last period; while that's less than the same quarter last year, it's also the highest ever for a 13-week quarter. Last year's first quarter was 14 weeks long, and Apple sold 78.2 million iPhones. On the earnings call, Apple CEO Tim Cook kept reminding investors about the week's difference between the two quarters, implying that the company might have matched or beaten iPhone sales otherwise.

Cook also hit back at the critics of Apple's expensive iPhone X (its starting price is $999), saying that it was the world's best-selling smartphone in the quarter ended in December, according to data from Canalys. He also noted that the iPhone X has been Apple's top-selling smartphone each week since it launched in early November.

Apple's newly redesigned App Store is attracting record amounts of spending. During the week of Dec. 24, a record number of customers bought or downloaded apps from the App Store, for a total $890 million spent in the seven-day period. In addition, customers spent $300 million on the App Store on Jan. 1, its highest-ever sales day since launching in 2008.

Apple said it's noticing an uptick in augmented reality apps. For example, December marked the return of the hit gaming app Pokemon GO, with its new augmented reality features built with ARKit. The app shot to the top of the App Store's charts.

The company includes the App Store in its overall services revenue, which saw a healthy 18% year-over-year increase to $8.5 billion.

The company noted that iPhone revenue was one of the key drivers of its highest-ever quarterly revenue. Apple said its three new iPhone models (the iPhone X, iPhone 8, and iPhone 8 Plus) brought in the most revenue of any of its past iPhone lineups.

Apple also boasted its highest-ever net income at $20.1 billion, up $2.2 billion year over year. Diluted earnings per share were up about 16% to $3.80, also an all-time record.

Like the other records, this one was helped by the year-over-year jump in iPhone revenue, despite the drop in quarterly iPhone sales from last year. Some investors are encouraged that Apple can keep growing its revenue and profit despite slowing demand for iPhones.

However, other investors are focusing on next quarter's guidance for revenue in the range of $60 billion to $62 billion, which is significantly lower than the $67.1 billion analysts were expecting. On the earnings call, CFO Luca Maestri pointed out that Apple is still guiding for revenue growth of 13% to 17% compared to the same period last year.

Most Apple investors should be breathing a sigh of relief after this report, considering the pre-earnings negative press reports from Asia about slowing iPhone X sales forcing the company to cut production in half. As usual, Apple held its own for another quarter.

Next up? Apple just started selling its first home speaker, the HomePod, on Feb. 9.