Please ensure Javascript is enabled for purposes of website accessibility
Log In Help Join The Motley Fool
Free Article Join Over 1 Million Premium Members And Get More In-Depth Stock Guidance and Research
By Chris Neiger, Jeremy Bowman, and Daniel Miller - Feb 13, 2018 at 9:55AM

Overlook these companies at your own risk.

Although there's no sure-fire way to pick a stock that's guaranteed to rise, there are ways to sift through the pile of public companies and find a handful of businesses that have the potential for stellar growth.

To help you find some high-growth stocks that could be well worth adding to your portfolio, we asked a handful of Motley Fool contributors for stock picks they think could double your money (over the long term, of course). They came back with Under Armor (UAA -0.86%), Control4 (CTRL), and Okta, Inc. (OKTA -3.25%). Read on to find out why. 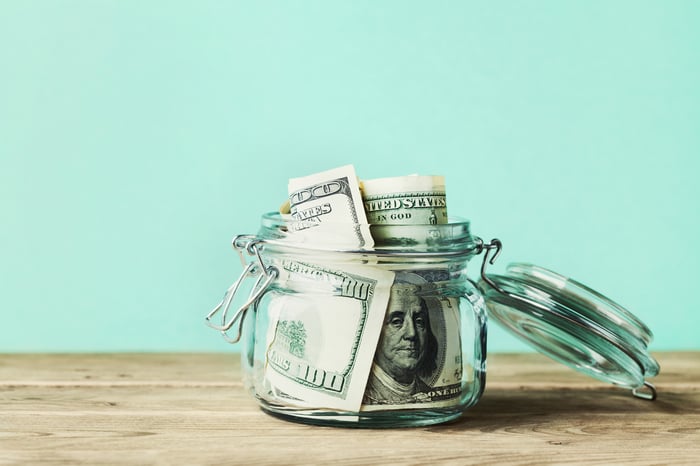 Jeremy Bowman (Under Armour): The market giveth and it taketh away. That's a lesson Under Armour investors know well. For a decade, the stock was one of the best performers on the market, jumping about 1,500% from its IPO in 2005 to its 2015 peak, but since then, shares have tumbled. A slew of bankruptcies among retail partners like The Sports Authority and the company's own mistakes with its brand and product have caused North American sales to plunge, and the sportswear maker reported its first quarterly loss and decline in revenue last year.

However, the stock has fallen so much that it wouldn't be that hard for shares to double from here. In fact, the stock is about 75% below its all-time high. If Under Armour can take steps to show it's turning around its business, improving margins, and returning to growth in North America, the stock should move higher.

Not all is lost for the company at this point. International growth and direct-to-consumer remain strong. It has an impressive roster of sponsors including Stephen Curry, Tom Brady, Cam Newton, Bryce Harper, and Jordan Spieth, and sponsorships with teams like UCLA and even Major League Baseball kicking in.

This still looks like a growth company in the midst of a temporary setback, and it has a huge opportunity in front of it. I wouldn't expect an immediate turnaround as analysts expect just breakeven profits for the fourth quarter, but as the vintage shoe trend fades, Under Armour should eventually get its mojo back. It's still a risky play, but in a couple of years, the stock could double if it returns to steady growth.

Capitalize on the smarthome

Daniel Miller (Control4): While past success isn't an indicator of future performance, Control4 proved to be a phenomenal investment in 2017, with its stock price gaining 191.8%, and despite those incredible gains, it could easily double again over the next few years as more homes add smarthome technology and the company increases its market penetration.

Control4 skyrocketed in 2017 thanks to being added to the S&P SmallCap 600 Index, recording multiple strong quarterly performances and having positive reception to new products released under its Pakedge home networking and Triad audio lines -- brands it acquired in 2016 and 2017, respectively. Business is good, with Control4 recently announcing fourth-quarter adjusted earnings of $0.40 per share, which topped its prior-year result by 29% and beat Wall Street estimates calling for $0.34 per share, per Zacks Investment Research.

Management estimates that Control4 has only penetrated about 2% of U.S. households that generate $150,000 income annually. That leaves the company plenty of room for growth in the U.S. alone, and the truth is, its international opportunity is even larger. Even the balance sheet is strong, with no bank debt as of December 31, 2017, which will enable management to snap up strategic acquisitions that can help drive revenue and market share higher.

With a strong balance sheet, strong quarterly performances, and room for growth in the U.S. and internationally, don't be surprised if 2017 isn't the last time Control4's stock doubles for its long-term investors.

A cybersecurity play with plenty of room to grow

Chris Neiger (Okta): Okta is an under-the-radar security company that's quickly building out its share in the niche market of identity and access management (IAM). The company builds software that allows companies to manage the passwords, personal profiles, and overall security access to their businesses. If a company wants to let an employee access certain files but not others, or set them up with a company smartphone with the correct permissions, then Okta's software is the ideal solution.

Okta is growing fast, and it increased sales by 61% in the third quarter, billings improved by 54%, and subscription revenue popped by 64%, all year over year. Okta is also winning over larger companies, and it increased the number of companies that generate over $100,000 in annual recurring revenue by 51% in the quarter, to 603.

It's not just that Okta is growing fast, but it's also outpacing its rivals in the identity management space as well. Late last year, Gartner named the company a leader in the access management market, and research from Forrester showed that Okta was ahead of Microsoft and other competitors in the Identity-as-a-Service (IDaaS) market.

Investors should know that the company isn't profitable right now, but Okta is still young, and as it continues to add more larger businesses (which it's already starting to do), it should be able to offset its costs with more high-margin customers.

The worldwide IAM market will be worth an estimated $15.9 billion by 2022, and Okta's current growth -- along with its leadership position in this niche market -- should help the company dive further into this segment and boost its share price at the same time.