Ambarella (AMBA 9.92%) stock fell 14.2% in January, according to data provided by S&P Global Market Intelligence. Ambarella counts on semiconductor sales to GoPro (GPRO 4.64%) for a substantial portion of its revenue, and news that the action-camera company saw weak sales for one of its core products and was leaving the drone market caused the chipmaker's share price to tumble.

GoPro accounted for roughly 21% of Ambarella's sales last quarter. On Jan. 8, GoPro released preliminary fourth-quarter results that came with a barrage of unfavorable indicators for Ambarella. The camera company reported soft demand for its Hero5 Black camera, lowered its fourth-quarter sales target, and announced that it would be exiting the drone space. These developments contributed to an increase in bearish sentiment on Ambarella stock. 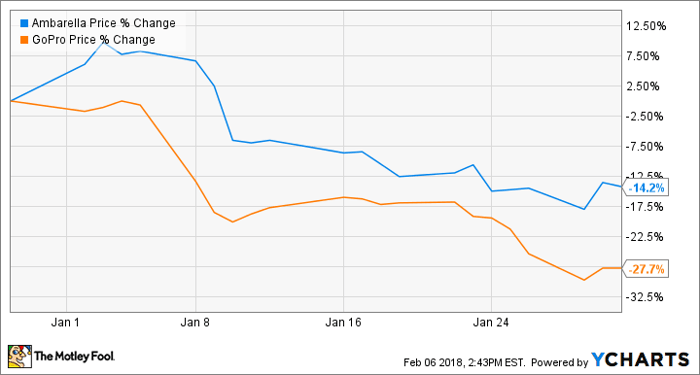 With demand for GoPro's devices waning and the camera company favoring other chip suppliers, Ambarella is making moves to diversify its sales base by focusing on security cameras and automotive uses. Sales are on track to decline in the short term, as growth from other segments likely won't be enough to offset declining sales to GoPro, but Ambarella could still be a worthwhile portfolio choice for long-term investors.

The company sees its next big growth opportunity in the machine-vision and artificial intelligence spaces, and has a new line of machine-vision chips shipping to manufacturers in the near future. Management expects these chips to offer significant advantages versus competing offerings, and has indicated that potential customers have been very impressed by their performance.

Valued at roughly 31 times forward earnings estimates and with limited visibility as to how its upcoming chips will perform from a sales perspective, Ambarella stock is a high-risk investment. However, the company does have proven competence in the imaging space, and its stock will likely see strong growth if it can secure a leading position in the automotive chip market.