Please ensure Javascript is enabled for purposes of website accessibility
Log In Help Join The Motley Fool
Free Article Join Over 1 Million Premium Members And Get More In-Depth Stock Guidance and Research
By Neha Chamaria - Updated Feb 13, 2018 at 5:39AM

The RV manufacturer is growing at a torrid pace, so why is the market worried?

After a blowout year in 2017, shares of recreational vehicle (RV) and trailer manufacturer, Winnebago Industries (WGO -3.58%) are finding it hard to stay put on the northward-bound track. Winnebago stock slumped 18.3% in January, according to data from S&P Global Market Intelligence, with the major portion of the losses coming after an analyst downgrade.

What's interesting is that the analyst downgraded both Winnebago and peer Thor Industries (THO -1.10%), suggesting that the RV sector could be losing steam.

Winnebago stock was holding up firm until the last week of January when Northcoast Research downgraded its rating to neutral, raising concerns that retail sales in the industry may slow down and that the dealer inventory is at "unsustainable" levels for 2018.

Winnebago relies heavily on its dealership network in the U.S. and Canada for sales and manufactures motorhomes and towables to order from dealers. So if end-user demand doesn't shape up as anticipated, dealers will work through their existing inventory and delay or cancel fresh purchases from Winnebago. Another point worth noting is that two dealer organizations alone accounted for 19.9% of Winnebago's total revenue in fiscal 2017, so lower demand from them could hurt the company's top line substantially. 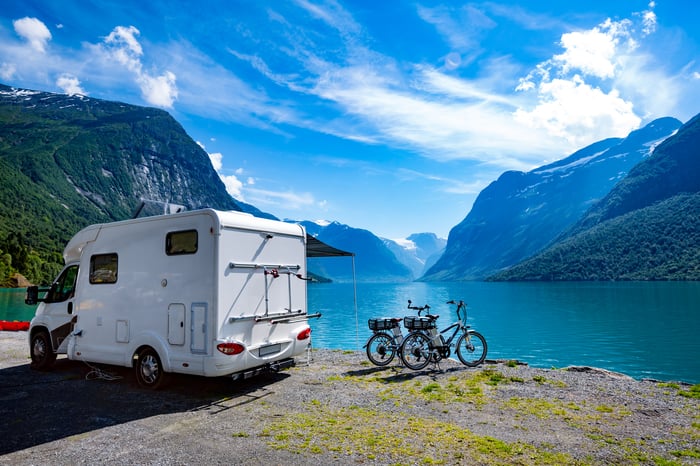 Northcoast Research's apprehensions come after a series of strong quarterly earnings reports from Winnebago through 2017. On Dec. 20, Winnebago reported a whopping 83.5% year-over-year jump in revenue for fiscal 2018 first quarter ended Nov. 25, including the contribution from Grand Design, the towables maker that Winnebago acquired in 2016. As of Nov. 25, Winnebago's motorized and towable backlog value surged 21.1% and 59.2%, respectively, from the year-ago period.

The RV market has been in an up cycle for eight consecutive years now, so concerns about an impending slowdown are understandable. However, the strong backlog and sales momentum at Winnebago and Thor suggest the cycle may not turn around anytime soon.

During its last quarterly earnings release, Winnebago CEO Michael Happe remained optimistic that 2018 will be the "ninth consecutive year of growth" for the RV industry. The company is looking forward to a strong year, backed by several new launches during the latter half of 2017, including Class A Gas RV, the Horizon Class A Diesel, new Winnebago-branded fifth-wheel, and Grand Design's Transcend line. Management has even laid out some encouraging long-term goals through 2020.

Until management tones down its bullish tone or gives out a muted outlook for 2018 and beyond when Winnebago reports its earnings next month, there's little reason to lose confidence in the stock.

Winnebago Hints at a Sustained Lift From COVID-19 Travel Changes