The company finishes 2017 with a credible performance, but records a fourth-quarter loss due to tax and impairment charges.

Euronet Worldwide (EEFT -2.52%) closed out 2017 on a positive note in earnings released on Feb. 6, as strength in its ATM transaction network shored up overall fourth-quarter earnings results. Euronet also recorded impairment and tax charges in the fourth quarter, which we'll dive into below, among other details, after a review of the headline numbers. 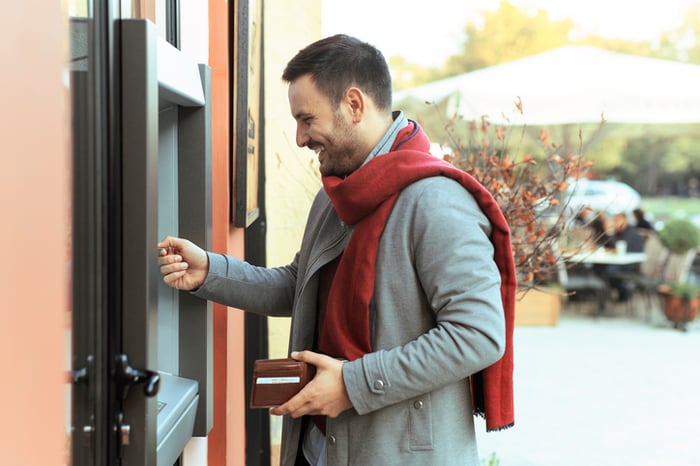 For the fifth consecutive year, we were able to deliver double-digit adjusted EPS growth despite revenue pressure resulting from lower customer pricing in conjunction with the extension of our Walmart agreement, and the impact of the demonetization in India.

In addition to consolidated double-digit growth, we also produce some other very impressive numbers. We delivered more than $2 billion in revenue. We processed more than 3.6 billion transactions. Our global network now reaches nearly 1.5 million devices and locations. We added 3,300 high value ATMs across Europe and India, and we were responsible for $95 billion in cash across our three segments, which is 13% more than in 2016.

Most of the trends Brown mentions above appear set to continue during 2018. Most importantly, as Euronet stabilizes its epay business and absorbs near-term profit decline in money transfer, the company is clearly counting on its traditional strengths in ATM network expansion within EFT processing to bolster overall top-line growth.

Looking to the first quarter of the current year, Euronet's management provided an estimate for adjusted earnings per share of $0.73, which is essentially a flat projection against the comparable prior year quarter. CFO Rick Weller explained on the company's earnings call that three separate factors totaling $0.10 have impacted the outlook for the first three months of 2018.

First, the company sees a tax impact of $0.05 per share, driven by projected earnings in high-tax jurisdictions as well as the effects of the recent tax law changes. Second, the company granted additional discounts to a large European credit card processor in the fourth quarter, in exchange for extending its current agreement over a longer term. This will have a small but tangible effect on margins.

Finally, the company will deactivate a higher number of ATMs during its annual seasonal "winterization." This practice, which occurs primarily in European cities, places a higher cost burden on the ATM network in the first months of the year. The foregone revenue is typically made up during the spring when the ATMs are placed back in service and tourism picks up.

In sum, while Euronet sees some slight headwinds against earnings at the outset of this year, the company still has the potential to enjoy operating leverage if transactions across its three segments continue to improve. The company is next slated to report earnings in early May.