Nintendo (OTC:NTDOY) is coming off a phenomenal holiday quarter that showed sales of its Switch game system accelerating to more than 12 million units sold to date since the system's March 2017 launch.

But management is not resting. Nintendo recently announced a new product called Labo that releases in April. Once again, it shows Nintendo at the top of its form in innovative and creative approaches for introducing gaming to a wider audience. 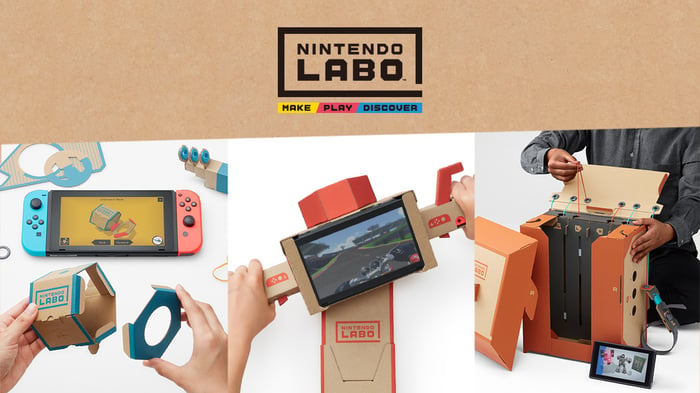 Labo is a do-it-yourself kit that combines cardboard cutouts with software that turns a Switch system into an interactive toy. There are two versions. One is a variety kit that includes pieces to make a piano, fishing rod, toy house, even a remote-controlled car, and this set will sell for $69.99. The other set includes everything you need to turn yourself into a robot for the price of $79.99.

It's a simple, cute, fun idea -- brilliant, really -- that I believe will resonate with a lot of Switch owners, especially children and parents, and it may encourage those on the fence to take the plunge on a $300 Switch. And given that it's made of cardboard, my guess is Labo will generate much higher profit margins than the costly hardware inside of Switch.

Yes, 2018 is certainly looking like it will be another humdinger year for the classic gaming brand.

Nintendo reported in its third-quarter earnings release that the response to Labo has been overwhelmingly positive and that applications to its demo events have far outstripped available spaces by 50 to 1. Early hands-on reviews have also been very positive. Reading about Labo leaves me with the impression there are a lot of different directions Nintendo can take with this product that won't be seen initially when the first two kits release this spring.

Just think about how similar "Labo" sounds to "Lego," another iconic toy famous for its build-it-yourself design. I don't think this is a coincidence. I'm betting Nintendo has an infinite number of ideas for variations of these make-your-own-toy kits. Nintendo said that in the weeks ahead it will reveal more specifics about Labo, but management already gave investors some insight into its long-term thinking when it stated the following in its Q3 earnings presentation:

Nintendo Labo is a product intended to broaden the possibilities of Nintendo Switch. We hope to develop Nintendo Labo into a product that is not bound by the conventional boundaries of video games, and that endears itself to an even broader range of consumers.

Another element to Labo that I think will make it very successful is that you're playing with cardboard and yet you're also using advanced technology within the Switch -- such as its infrared cameras and motion-enabled controllers -- to bring the cardboard objects to life. In this age of talking watches and smart-AI everything, there's something about experiencing technology hidden inside simple materials like cardboard that seems refreshing and playful.

Nintendo isn't the first to try this cardboard approach. Alphabet has shipped millions of units of its virtual reality headset that is housed in cardboard, officially called Google Cardboard (obviously).

It's easy to see Labo as a novelty that may quickly lose its appeal. But keep in mind, Nintendo sold 101.63 million Wii consoles essentially based on novel motion-enabled controllers that allowed Wii owners to play games like they had never played before. Nintendo Labo introduces a similar novel concept for Switch that could have an appeal on a similar scale.