One of last week's biggest winners was Twilio Inc. (TWLO 1.62%), moving 35.6% higher after posting well-received financial results. The fast-growing provider of in-app communications solutions saw its base revenue rise 40% to $105.3 million for the fourth quarter, just ahead of the $102.5 million to $104.5 million it was targeting when it initiated guidance for the period three months ago. Twilio's adjusted deficit of $0.03 a share was less than the per-share loss of $0.05 to $0.06 it was forecasting.

Twilio offers developers ways to communicate with app users. Whether it's a matter of resetting your WhatsApp password or receiving a call from your Lyft driver at the pick-up location, Twilio makes apps more efficient, and there's a lot of money being made as these revenue-generating actions for Twilio add up. 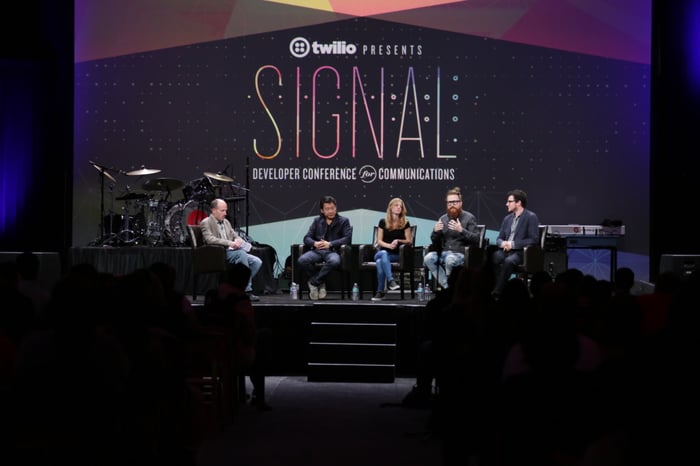 Twilio stock closed out last week within 5% of hitting a new 52-week high, a remarkable comeback for a stock that was slammed last year after the company revealed that Uber was playing the field by testing out rival in-app solutions. Uber was its largest customer at 12% of its revenue at the time, and the fear was that growth would slow as the leading ride-sharing service would wean itself off Uber and other top apps would follow suit.

Uber's fade has left a mark. Twilio revealed during last week's call that base revenue would've risen 62% by excluding Uber. The good news is that 40% growth is still darned impressive, and we're also seeing Twilio rely less on its major developers. We've seen Uber's 10 largest accounts go from accounting for 29% of its revenue to 17% over the past year. WhatsApp and Uber -- Twilio's two largest accounts -- are now down to 7% and 5% of its business, respectively.

Diversification has been the key for investors to appreciate Twilio without fearing defections. Another big key to its success is getting customers who approach Twilio for its programmable messaging and voice products to adopt additional products. Its dollar-based net expansion rate is 118% -- or 136% without Uber -- and while that rate has been declining in recent quarters, it's still north of 100%. In short, the average customer is spending more.

Twilio's guidance calls for $108 million to $109 million in base revenue for the current quarter, sequential growth and 34% to 35% ahead of the prior year's showing. Growth continues to decelerate, but this counts as yet another "beat and raise" for Twilio.

There could've been some disruption when Twilio announced that its CFO is leaving the company, but the market was too impressed with the tech speedster's growth to fret about leadership change. Twilio's active customer count has grown from 34,457 to 48,979 over the past year. Unlike the problematic third quarter, with the stock taking a double-digit percentage hit because most of the "beat and raise" was already realized, the market is upbeat again about Twilio. Growth in revenue, net expansion rate, and active customers may be slowing, but they're all moving in the right direction. Twilio will need to keep things going that way if it wants to remain a market darling this time.