Please ensure Javascript is enabled for purposes of website accessibility
Log In Help Join The Motley Fool
Free Article Join Over 1 Million Premium Members And Get More In-Depth Stock Guidance and Research
By Daniel B. Kline - Feb 19, 2018 at 8:35AM

The company has a major opportunity ahead of it.

World Wrestling Entertainment's (WWE 2.00%) greatest long-term risk will also deliver big short-term gains. Its network television deals, which provided over $270 million in 2017 revenue, should grow considerably when the company signs its next deal.

The television market is changing and while there may be a correction when it comes to sports rights fees, it's not going to come before WWE makes its next deal in the U.S., which accounts for roughly two-thirds of its overall television revenue. 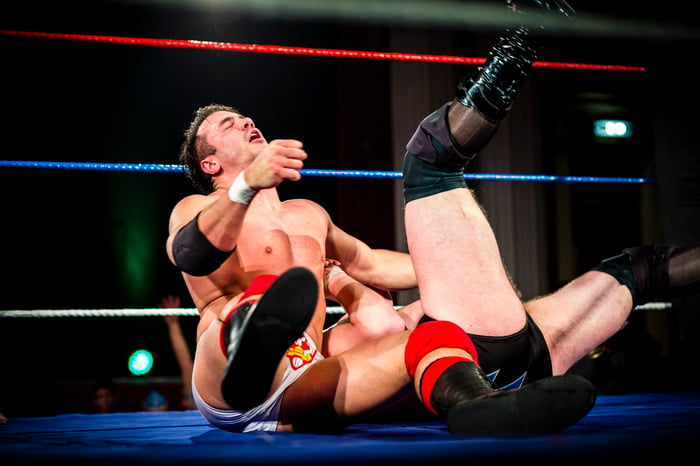 What's happening in the market?

The cable universe keeps getting smaller. Consumers are cutting the cord and opting for a package of streaming services like Netflix, Hulu, and in some cases WWE's own network. In the long run this may change the amount of money cable stations have to pay for rights. In the near term, cord cutting has actually made live sports programming (which WWE is considered) more valuable.

Live sports is a draw because it's one of television's few events that people want to watch live and actually sit through commercials. WWE produces five hours of live broadcast television each week that draws stable ratings near the top of the weekly charts. The content does not monetize well as ad rates are lower for wrestling than other sports or scripted programs with similar ratings, but it does draw eyeballs.

WWE is poised to score

The last time WWE's U.S. TV deal came up, Comcast (CMCSA 1.18%) was the only bidder. This time it has been heavily rumored that FOX (FOX) would be interested to help jump-start its FS1 and FS2 networks.

It's also possible that WWE, which currently has a minor show on Facebook,would consider bringing its signature shows Raw and Smackdown Live to the social media site or Amazon.com's Prime video service. There could also be a surprise bidder for the package, which would begin after September 2019, and it's possible the company could split rights between a traditional network along with a digital one.

WWE will almost certainly agree to a deal in 2018, well before the current one expires. Having multiple bidders should push the price higher, and that's a pure gain for the company. Higher rights fees come with no associated added costs so any improvement will directly bolster the bottom line.

Beware of the future

While this U.S. television deal looks like it will be a major increase, this could be the last time that happens. As the cable market continues to shrink, at some point companies will not be able to pay hundreds of millions of dollars for deals because they won't have the viewers or revenue to justify the cost.

Of course, between 2019 and 2022 or 2023, depending upon the length of the deal, a lot can change. WWE may have multiple broadcast partners, including a cable company and a digital partner, or it could bring its key shows to its own network.

It's simply too soon to know when cable's decline will end and what the market will look like in two years let alone three or five. For now, however, WWE has something that broadcasters still need -- live programming -- and it's going to cash in.