Please ensure Javascript is enabled for purposes of website accessibility
Log In Help Join The Motley Fool
Free Article Join Over 1 Million Premium Members And Get More In-Depth Stock Guidance and Research
By Brian Stoffel - Feb 20, 2018 at 8:45AM

If you think the e-commerce leader's stock is expensive now, just take a look at the last chart.

In 1999, Amazon.com (AMZN -2.04%) was featured in a 60 Minutes piece that painted the company as being at the vanguard of the future -- but one whose primary focus was books.

The desk that founder/CEO Jeff Bezos sat at was made of a door turned on its side with four-by-fours propping it up. The wall of his office had "Amazon.com" spray painted on it.

And that's about it. 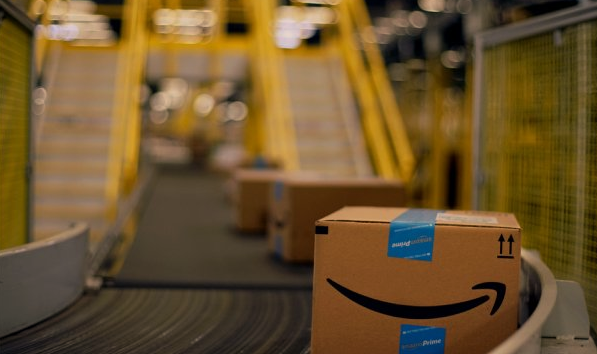 Somehow, it has morphed into one of the largest and most important organizations the world has ever known. How did we get from point A to point B? While it's an oversimplification on many levels, these seven charts largely tell the story.

Back when Bezos was first profiled by 60 Minutes, he had about 2,100 employees. Of course, that's not nothing, but it pales in comparison to where the company is today. The current massive employee base is a big deal for two reasons: first, it gives the company clout whenever it's looking to expand operations -- "Look at how many jobs we create!" Nothing illustrates that better than the recent phenomenon of hundreds of North American municipalities falling all over themselves in their quest to attract Amazon's HQ2.

The second reason this is a big deal is simply that the chart indicates not only that Amazon is growing, but that its growth is accelerating.

Building a mile-wide moat around the business

There should be nothing more important to long-term investors than the sustainable competitive advantages that a company has. While Amazon has a host of moats protecting its business, the one that must be viewed as primary among them is its network of fulfillment centers (FCs).

And those centers have been growing in number -- fast. 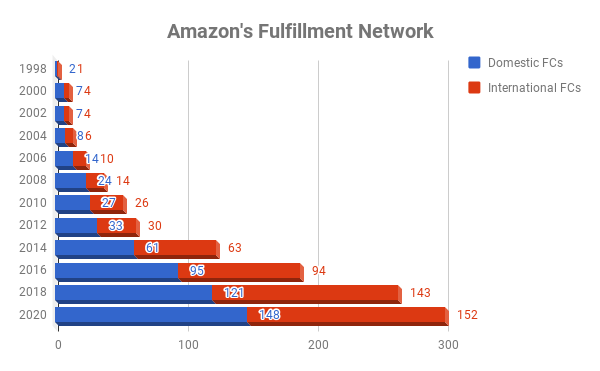 These FCs are why Amazon can deliver packages to your front door in two days -- often times even faster. For any other company to match this scale, it would have to undertake a massive effort to invest capital and accept that they'd be losing billions along the way.

Prime gets users in the door... and keeps them there

This fast delivery is the best reason for becoming an Amazon Prime member -- two-day shipping is included free with an annual $99 fee. And the program has proven enormously popular since it was launched in 2005. 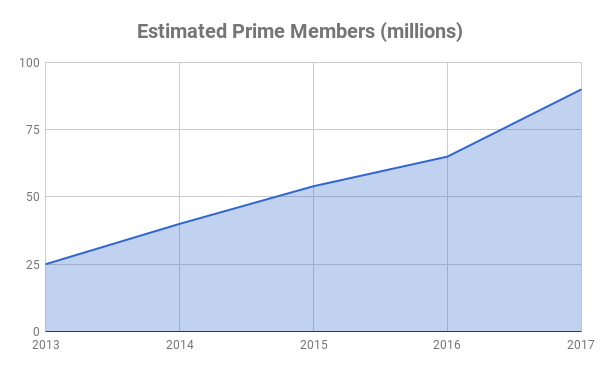 Officially, the company doesn't publish Prime membership numbers, but these are the estimates that outside experts have given.

But the benefits for Amazon don't stop there: the average Prime member spends almost twice as much annually on the site as a nonmember.

All of these forces -- Amazon's growing the network of fulfillment centers, its guaranteed fast delivery, its loyalty program -- have combined to produce massive sales growth over the past decade. 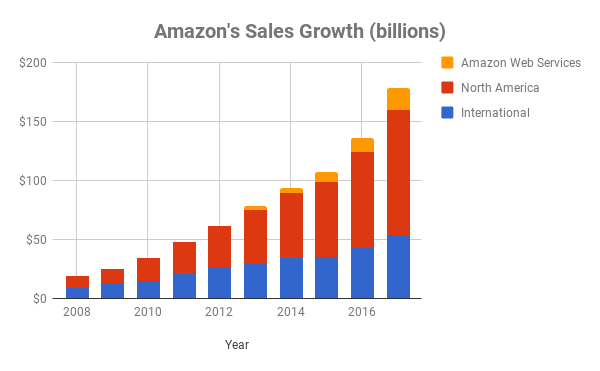 For a company the size of Amazon -- valued at over $700 billion -- last year's sales growth of 31% is very impressive. Even more so: management is forecasting that sales in the current quarter will jump even faster -- by between 34% and 42%.

AWS is just the beginning

You might have noticed those little orange slices at the top of sales chart above. Those represent Amazon Web Services (AWS) -- the company's cloud hosting tool. Operating profit from the segment has been booming. 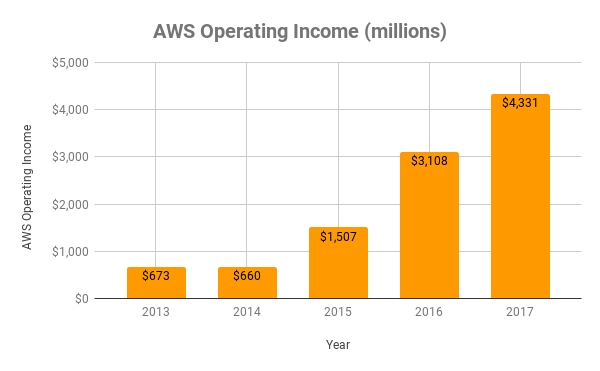 Here's what's fascinating about AWS -- which has never accounted for more than 10% of sales. Over the past five years, Amazon -- the entire company -- has generated $11.4 billion in operating income. AWS has provided 90% of that.

The company started AWS as a way to reduce IT bottlenecks within the company. Once its solution had been perfected, it simply offered it up to outsiders. Don't be surprised to see Amazon do the same thing with fulfillment (it's already started), delivery (just around the corner), and even healthcare (it's teaming up with a few other extremely big names).

All of these forces have combined to create one of the greatest wealth-producing opportunities the world has ever seen. 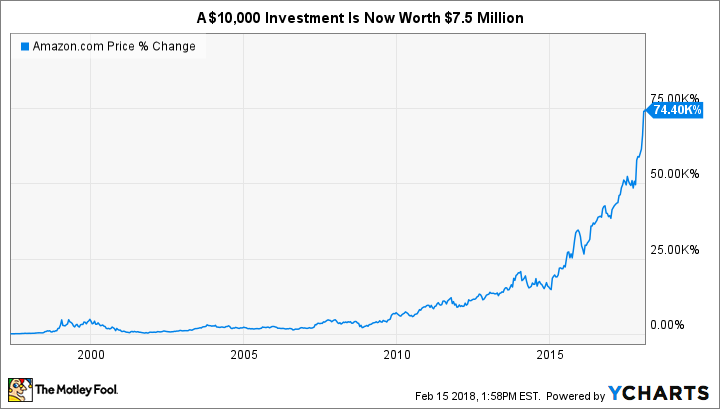 Our own Chief Rule Breaker David Gardner purchased shares for a split-adjusted $3.19 per share. Of course, not selling is important if want returns like this. And many people probably think the days of heady growth fro Amazon are over.

The runway is still very long

But it would be a mistake to anchor on the past prices of Amazon's stock and think that you've completely missed the boat. As it is, e-commerce only accounts for a small slice of retail sales in America.

As of the end of the third quarter, less than 10% of all retail sales were completed via e-commerce. The momentum of the shift toward it is undeniable, but many investors underestimate the potential for Amazon to continue exploiting it.

You can count me as someone who still believes the company has lots of room to grow. My skin is thoroughly in the game -- Amazon stock accounts for roughly 20% of my real-life holdings. If you have a decades-long time horizon and a stomach for volatility, I suggest you consider taking a small portion of the company as well.