Please ensure Javascript is enabled for purposes of website accessibility
Log In Help Join The Motley Fool
Free Article Join Over 1 Million Premium Members And Get More In-Depth Stock Guidance and Research
By Maxx Chatsko - Feb 21, 2018 at 9:45AM

In late January, water, hygiene, and energy conglomerate Ecolab (ECL -2.30%) provided investors with preliminary expectations for full-year 2017 results and full-year 2018 guidance. The briefing indicated that the new tax laws in the United States would boost fourth-quarter 2017 earnings per share by between $0.45 and $0.55 per share, and add another $0.10 per share for all of 2018. It hinted at strong performance last year even without the tax benefit, and called for impressive EPS growth in the year ahead.

Turns out last month's update was spot on. Ecolab announced full-year 2017 results that included a $0.55-per-share benefit from the new tax laws, delivered on its previous guidance for last year, and maintained its preliminary outlook for up to 16% EPS growth in 2018. Importantly, all three segments reported solid operations -- and a 23% drop in year-over-year corporate expenses didn't hurt, either. Here's what investors need to know about the prior year and the year ahead. 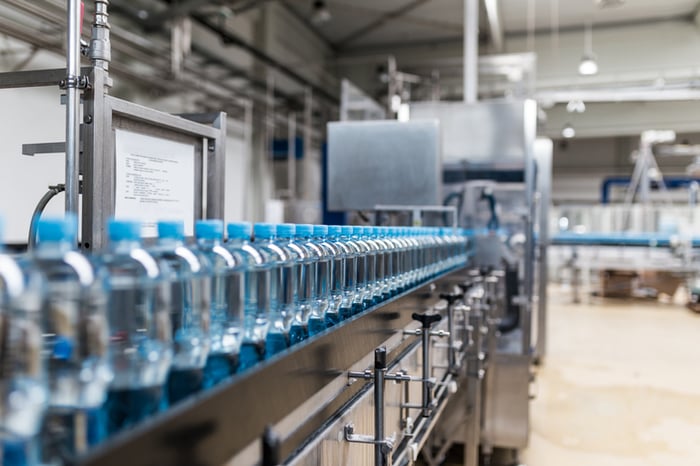 After a rough Atlantic hurricane season disrupted operations during the third quarter of 2017, Ecolab was forced to reduce its full-year 2017 guidance for adjusted diluted EPS to a range of $4.65 to $4.70. The business delivered, posting adjusted diluted EPS of $4.69 last year, which excludes the one-time benefit from the new U.S. tax law and a handful of special charges. That marked a 7% increase compared to prior-year adjusted diluted EPS.

Total revenue and operating income both jumped 5% last year compared to 2016 totals, while net income leapt 23%, thanks in large part to a one-time tax benefit. Every operating segment -- energy, industrial, and institutional -- contributed to year-over-year growth, although the biggest boost to operating income actually came from reduced corporate expenses.

Data source: Ecolab. NOTE: ALL NUMBERS ARE REPORTED IN PUBLIC CURRENCY RATES AND ARE NOT ADJUSTED.

The energy segment turned things around in 2017 after years of struggle, thanks to increased activity in American shale fields. Ecolab's well-stimulation business ended the year with ample momentum, as did production and downstream. That reflected growing optimism for U.S. energy production growth in the year ahead, thanks to stronger crude oil prices and booming exports of liquefied natural gas.

Meanwhile, Ecolab's industrial segment continued to ride strength in food and beverage and in life sciences. Latin America continued to be an important source of growth for the segment and the company. The institutional segment reported the best year-over-year improvement of all segments, thanks to specialty products and momentum in the Asia Pacific region.

There are a few changes coming investors' way in the first half of 2018.

First, Ecolab will adopt the new FASB (Financial Accounting Standards Board) revenue recognition standard, which requires companies to separate service revenue from product revenue on income statements. Additionally, certain costs previously reported as selling, general, and administrative (SG&A) expenses will be moved to cost of goods sold. While that will alter gross profit calculations in future, the company will retroactively restate income statements dating back to 2016. So don't be surprised when first-quarter 2018 financial reports look a little different from those in the past.

Second, Ecolab is in the process of adopting new enterprise resource planning and human resources software systems. The changes will incur one-time implementation costs that will sap first-half 2018 earnings. Therefore, earnings will be stronger and corporate expenses lower in the second half of the year.

As you can see from the table above, slow and steady improvements can really add up. Continued investment in high-margin products and industries with good growth prospects will increase volumes and boost operational performance in 2018. Perhaps nothing reflects that better than the fact that the new tax laws will provide an EPS benefit of just $0.10 in the year ahead. All other gains will come from reduced expenses, improved efficiency, and industry-leading products and services.

Shareholders should be happy with Ecolab's performance in 2017. The $38 billion company met all of its objectives and delivered on its full-year guidance, thanks to the cumulative effect of many small wins spread across its global energy, institutional, and industrial segments. That could set the stage for a solid 2018, as the company expects to achieve steady growth in the year ahead with impressive adjusted EPS growth. Simply put, Ecolab remains a blue chip stock, despite a volatile share price at the start of the year.