Please ensure Javascript is enabled for purposes of website accessibility
Log In Help Join The Motley Fool
Free Article Join Over 1 Million Premium Members And Get More In-Depth Stock Guidance and Research
By Scott Levine - Feb 21, 2018 at 8:30AM

Grab a pickax and dig in to see how this copper miner makes its green.

When talk around the water cooler turns to investing in copper, Freeport-McMoRan (FCX -3.38%), the largest publicly traded copper producer, is a name bound to come up. But the company does have interests in other materials. In fact, the company made a concerted effort to reflect that. According to the company's website, it changed its name in 2014 from Freeport-McMoRan Copper & Gold Inc. to Freeport-McMoRan Inc. in order to "better reflect [its] expanded portfolio of assets."

Involved in the production of gold, silver, and molybdenum, the company has broadened its reach since the 1870s when it staked its first mining claims in Arizona, building a portfolio that includes assets in South America and Indonesia as well as North America. Copper, however, still plays the most prominent role in the Freeport-McMoRan's portfolio. In fiscal year 2017, for example, copper sales accounted for 67% of the company's revenue. But this is only a glance, so let's dig in deeper and learn how prominently the sale of copper plays in the company's operations. 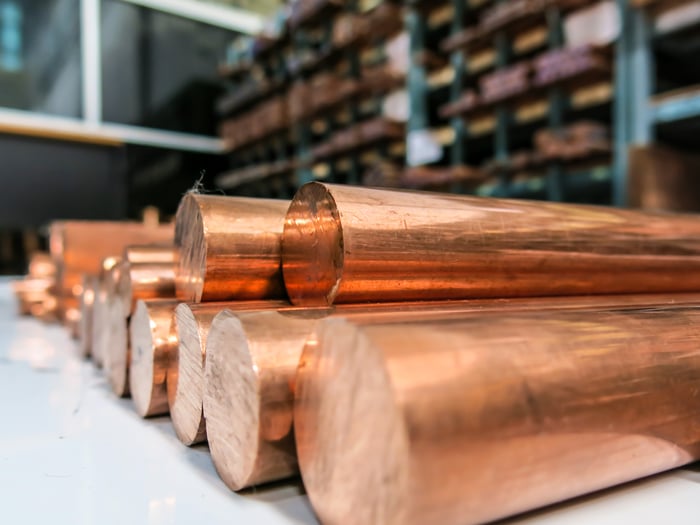 Grasberg may be Freeport-McMoRan's only asset in Indonesia, but that doesn't mean it deserves short shrift. In fact, Grasberg, one of the world's largest copper and gold deposits, plays an unmistakable role in the company's operations. In fiscal year 2017, for example, Grasberg accounted for $2.02 billion in operating income whereas mining operations in North America and South America only represented $1.37 billion and $916 million, respectively. Since the production of copper is where Freeport-McMoRan makes its hay, though, let's take a closer look at the company's portfolio.

Management certainly recognizes that Grasberg has the potential to remain a valuable resource. Of the 86.7 billion pounds of copper in proven and probable reserves that the company recognizes in its portfolio, Grasberg accounts for 25.1 billion pounds. The company foresees average annual capital expenditures of $900 million over the next five years to develop several projects at Grasberg, the most-immediate project on its horizon is the Grasberg Block Cave. The company is currently preparing to transition mining operations to the Grasberg Block Cave, which is expected to commence copper production in the first half of 2019.

Besides Grasberg, the company expects the Lone Star expansion project at the Safford mine in Arizona to play a prominent role in helping the company maintain its position as a leader in the copper-production industry. Identifying an $850 million budget for the project, management estimates Lone Star will average approximately 200 million pounds of copper per year with a mine life of approximately 20 years. Management expects copper production will commence by the end of 2020.

But will the narrative change?

It's clear how valuable a role Grasberg plays in Freeport-McMoRan's operations, but there's some skepticism as to whether the mine will continue to provide the bulk of the company's cash in the coming years. Currently, the company, with a permit to operate Grasberg that expires in June, is in negotiations with the Indonesian government to ensure the long-term stability of its operations in the country.

Management seems optimistic that it will find a favorable resolution to the dispute. Commenting on the issue during the Q4 earnings call, Richard Adkerson, the company's president and CEO, said:

Now, what is really important to our company is, getting the rights to operate through 2041. And I'm pleased to report those negotiations are advancing in a mutually amicable way. We have very good working relationships with the ministers that have been assigned to represent the government on this.

Management's hopeful outlook isn't the only indication that the Indonesian government is amenable to the company's continued operation in the country. According to Reuters, the Indonesian government recently issued Freeport-McMoRan a copper-concentrate export permit that expires in February 2019. The company's previous permit had expired last week.

With a 140-year history in copper production, it's unlikely that Freeport-McMoRan will change its focus any time soon. And although there is some discord between the company and the Indonesian government regarding the operations at Grasberg, the company's numerous assets in North America and South America suggest that copper will continue to provide the lion's share of the company's money. Investors, nonetheless, will surely want to monitor the company's negotiations with the Indonesian government considering the fact that Grasberg represents its most lucrative asset.