While it plays an important role in run-of-the-mill uses such as electrical wiring and plumbing pipes, copper also is vital in the construction of electric vehicles (EV). Demand for the metal, which is used in their batteries and motors, is expected to soar in the coming years as production of EVs accelerates. According to a recent study by IDTech Ex, the growth of the EV market will produce an eightfold rise in copper demand over the next 10 years.

That looming surge in the number of electric cars and buses on the road isn't the only reason investors should consider adding copper exposure to their portfolios. For those generally interested in metals, copper offers an alternative to gold and silver, one that mitigates the risk of a downturn in the precious metal markets. So let's dig in and take a look at the most promising opportunities for investing in the metal: Freeport-McMoRan (NYSE:FCX), BHP Billiton (NYSE:BHP), and Southern Copper (NYSE:SCCO). 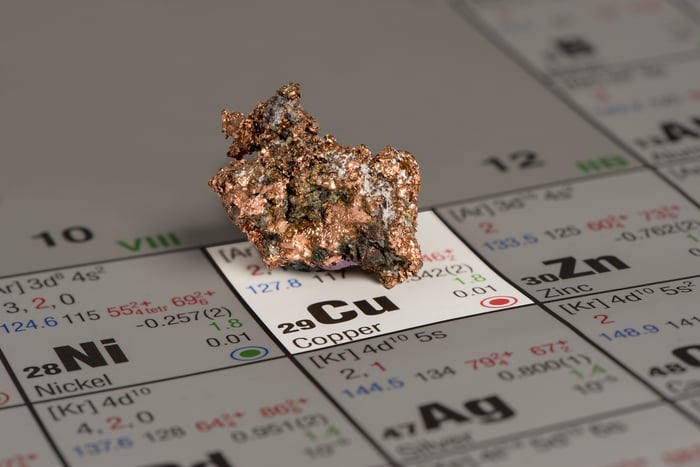 Recently named to Forbes magazines "Just 100: America's Best Corporate Citizens" list, Freeport Mc-Mo-Ran is the largest publicly traded copper producer. In addition to its seven mines in North America, Freeport-McMoRan operates two copper mines in South America, and the Grasberg mine -- one of the world's largest copper and gold deposits -- in Indonesia. Although the company's operations also produce gold and molybdenum, it is copper that's primarily responsible for keeping the company's lights on. In fiscal 2017, for example, copper sales accounted for 67% of the company's revenue.

Although Freeport-McMoRan made a brief foray into the oil and gas business, that proved unsuccessful and compromised the company's financial health. In consequence, it has divested itself of most of its oil and gas assets. The company, however, is returning to a more secure financial position. For example, it succeeded in reducing its leverage in 2017: While its net debt-to-EBITDA ratio was 4.6 at the end of 2015, that ratio was down to 1.5 at the end of 2017. In fact, the company's financial health has improved so much that management was recently inspired to reinstate its cash dividend, which had been suspended since 2015.

Moreover, operational cash flow (OCF) has improved. In fiscal 2017, the company reported OCF of $4.7 billion -- a year-over-year increase of 26%. And management foresees further growth, forecasting OCF in excess of $5.8 billion for fiscal 2018 (as long as the price of copper averages $3.15 per pound).

Don't meddle with this metal producer

Headquartered in Australia, BHP Billiton has been digging metals out of the ground since the mid-1800s, when it began mining tin in Indonesia. One of the world's largest mining companies by market capitalization, BHP Billiton -- currently worth $120 billion -- is the fourth-largest copper producer in the world. Moreover, its well-diversified portfolio includes interests in a variety of other commodities: iron, coal, nickel, zinc, potash, and oil and gas.

Committed to remaining one of the world's premier copper miners, BHP Billiton is in the midst of developing two major projects. Located at the Pampa Norte mine in Chile, the Spence Growth Project is expected to extend mining operations by more than 50 years at the Spence deposit. Management expects capital expenditures of $2.46 billion for the project and foresees initial production commencing in fiscal 2021. Behind that in the company's pipeline is the Resolution Copper project in Arizona, a joint venture with Rio Tinto. 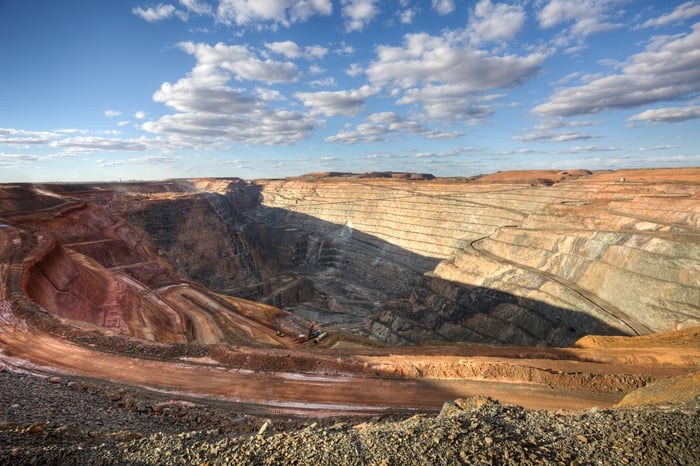 In its 2017 annual report, BHP Billiton characterized Resolution Copper as "one of the largest undeveloped copper projects in the world," and suggested it "has the potential to become the largest copper producer in North America." The next major stage in the project's development will likely start in December 2018, when the company expects to release a draft version of the Environmental Impact Study.

In fiscal 2017, copper represented the company's second-largest segment in terms of revenue, contributing $8.4 billion to its top line, and accounted for $3.5 billion in EBITDA -- 17% of the company's total.

The big name in big reserves

While Southern Copper can't claim the title of world's largest copper producer, it does win recognition for its copper assets. According to the company's estimates, it has about 70.1 million tons in copper reserves -- the most in the industry. To provide some context, the two companies which most closely trail it on that metric are Codelco and Freeport-McMoRan, which have reserves of 56.7 million tons and 36.6 million tons, respectively. Large reserves notwithstanding, the company should appeal to investors who want the greatest exposure to copper. In its fiscal 2016 (fiscal 2017 earnings haven't been released yet), copper accounted for 78% of the company's revenue. Given that there were no significant change to the company's operations in 2017, investors will likely find that the metal played a similarly prominent role -- if not a greater one -- in the company's finances last year.

Looking back on the past year, Southern Copper and its investors had much to celebrate. And it's not only the company's renewed dedication to rewarding shareholders in 2017 through the company's dividend. According to preliminary results, net income before the impact of a one-time tax adjustment due to the recently passed tax overhaul was $1.4718 billion, an increase of 89.5% compared to 2016. Although the 27% year-over-year increase in the price of copper contributed strongly to the bottom line-growth, investors should be pleased by the improvements in the company's  operations.

Speaking to the company's performance in 2017, Chairman of the Board German Larrea said, "During 2017 we continued seeing the benefit of our expansion and cost reduction programs which, despite the 18% increase in diesel prices during 2017, yielded a cash cost reduction from $0.95 to $0.92 per pound, the lowest in the industry." And the company is poised for further success in 2018 with the completion of the Peruvian Toquepala expansion project, which management claims will add 100,000 tons to annual copper production, helping the company to reach 1 million tons of annual copper production capacity with an even lower cash cost per pound of copper.

A penny for your thoughts

Interested in adding a more copper hue to your portfolio? Fortunately, there are several compelling choices. Investors looking for more direct exposure to the metal should be drawn to Southern Copper and Freeport-McMoRan, while more conservative investors who want to mitigate their risk by opting for a company with a more diversified portfolio should consider BHP Billiton. All three afford investors the opportunity to benefit from a metal that already plays a pivotal role in our infrastructure, and which will be crucial in the developing EV market.