What a new training center in Denver, a $9 price point, and cardboard mockups have to do with improving the guest experience.

Chipotle (CMG 1.48%) is struggling to get its customers back. While the burrito maker posted fourth-quarter revenue growth of 6.4%, same-store sales growth -- a key financial-health metric for the company -- for the quarter was a weak 0.9%. In its most recent earnings call, Chipotle laid out three guest initiatives in its most recent earnings call that it hopes will change all that: improvements in operations, upgrades with digital ordering and catering, and investments in its restaurants. Read about the details of these plans and what the new CEO may have to say about them.

When Chipotle hired Scott Boatwright as its first chief restaurant officer last year, it was partly because of his "proven accomplishments elevating the guest experience," the announcement said. One of his first actions was to reorganize the store management structure to be more focused, with a commitment to leadership development and training.

As Boatwright explained in the third-quarter earnings call, he has eliminated layers of management, reduced the number of stores reporting to each field leader, and "clearly articulated the roles, purpose, and responsibilities of field leaders to help them be more effective with smaller spans of control." 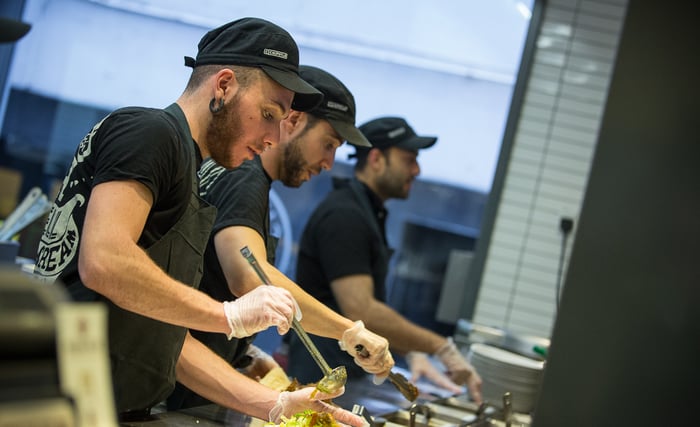 Chipotle wants every crew member to have a role in satisfying customers. Image source: Chipotle.

In the most recent quarter's call, then-CEO Steve Ells said that he's seen the benefits of these organization changes. Field leaders have more time to spend with store managers focusing on the guest experience. The training team, which reports to Boatwright, has created a new centralized training center in Denver and formalized the program to emphasize the guest experience. Ells said that the efforts are starting to pay off with "consistency around the speed of service and improving hospitality from every crew member."

A week after reporting its fourth quarter earnings Chipotle announced Brian Niccol its next CEO. Niccol, previously of Yum! Brands, will certainly have input on the operations plan with his extensive experience with much larger and more complex restaurant chains, Pizza Hut and Taco Bell. It wouldn't be surprising to see him push the operations team to accelerate their plans while challenging them to handle a more expanded menu.

In addition to the operational changes, the company is focused on providing easier ways for guests to order their favorite burrito.

Chipotle's success with digital ordering continued this quarter, with mobile ordering up 50% over the previous year to a record 8.6% of total revenue. This number is even more impressive considering that its technology upgrades for the second make line, where digital orders are prepared separately from walk-in customers' orders, are only in a small percentage of stores. Ells previously explained that "these new lines enable a faster and more accurate experience for our digital customers" with better crew productivity. The company is continuing this rollout, and it is expected to reach 30% of Chipotle's stores by the end of 2018.

Chipotle's catering currently accounts for less than 1% of total revenue, and is a great opportunity to expand store revenue and satisfy customers. The company is testing catering options for smaller groups with an improved cost, which would start at $9 per person for 10 people, versus a current $12 starting price and a 20-person minimum. With delivery for catering being offered in 40% of stores (and wider availability planned), the company hopes this can become a meaningful part of its business.

Niccol should have a positive impact on Chipotle's digital future too. His expertise in digital technologies, which was highlighted in his announcement, combined with his marketing prowess should only help the company improve these important customer facing capabilities.

Other than the improvements in the second make line, Chipotle hasn't made any significant face-lifts to its restaurants in its history, but it plans to change that, too.

With the company reaching its 25th year of operation, some of its restaurants need maintenance that has been left undone. The company is investing $50 million in capital, an average of $20,000 per store (double the usual budget), to "fully assess the interiors of every single restaurant," with the goal of improving their efficiency and make them warm and welcoming for customers.

An additional $45 million is earmarked to retrofit second make lines, and another $10 million is slated for new prototype restaurants.These prototypes are full redesigns for its new restaurants. The company has hired three firms to provide management with different alternatives to choose from.

Ells described the new concept: "It combines the traditional Chipotle experience along with things like digital pickup, whether it's in-store digital or out-of-store digital, and grab and go. And it also allows for potential new menu items, so really exciting stuff and really preparing ourselves for the next 25 years."

He also said that it has three cardboard mockups of the new store concepts, and the management team has walked through them to "kick the tires." The company likely won't make any final decisions until Niccol has a chance to review them, and customers won't see these new restaurants before 2019.

Lastly, Chipotle announced that it would launch a long-overdue loyalty program in the second half of 2018, but details of the program haven't been decided yet.  Niccol's extensive marketing and digital experience could help Chipotle craft a loyalty program that customers love.

The combination of all of these efforts should help bring customers back, but investors will have to be patient -- it may take years for all these changes to be fully implemented. The wild card in all of this is what Niccol will do. Given his history of driving fast-paced change, it will be interesting to see how these plans will shape up over the next couple of quarters.