Not only did the automaker's sales in China take a hefty dip to open 2018, but crosstown rival General Motors' numbers soared.

If there's one market outside of the U.S. where Ford Motor Co. (F -3.38%) needs to excel during the next decade, it's China. Unfortunately, despite years of progress and growing sales there, Ford's growth in that country has slowed, and it started 2018 on the wrong foot. Let's take a look at the data coming out of China and consider what Ford plans to do to change its fortunes in that critical market.

If Ford was looking to inspire confidence in its investors and gain ground on rival General Motors (NYSE: GM) in China, January was not the sales report the folks at the Blue Oval were hoping for. Ford's total sales failed to reach even 76,000 vehicles and were down 18% compared to the prior year's result. One quick glance at the monthly report and the culprit is easy to spot: Changan Ford (CAF).

CAF is the joint venture responsible for producing the Escort, Focus, Mondeo, Taurus, EcoSport, Kuga, and Edge in China, and not a single one of those nameplates posted a year-over-year sales gain last month. In fact, the sales declines for those models ranged from 18% to a staggering 53%, with CAF posting a total sales slump of 29%. That result swamped the January sales gains of Jiangling Motor Corp. --  the Ford joint venture that produces the Transit, Tourneo, Everest, and other light and heavy trucks posted a 13% increase -- and Lincoln, which posted a 7% rise. 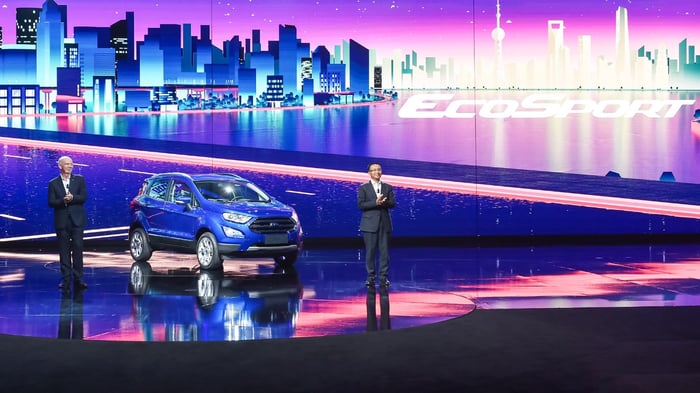 "As we reposition our Ford business in China, SUVs, luxury and commercial vehicles are key priorities of our strategy this year," said Peter Fleet, president of Ford Asia Pacific and Chairman and CEO of Ford China, in a press release. "We are pleased that our focus on these areas continues to generate positive results for both JMC and Lincoln."

Ford's less-than-stellar Chinese sales data looks even worse when you glance at General Motors' results. GM and its joint ventures there delivered more than 367,000 vehicles in January, which was a strong 14.5% gain over the prior year's result. Cadillac set a new monthly sales record in China, Chevrolet recorded its highest monthly growth in almost three years, and Baojun, its Chinese joint-venture brand, had its best January performance on record.

It's clear that if China is to turn into Ford's second pillar of revenue and profit strength -- the main pillar being North America, of course -- the automaker will need to refresh its strategy. That's exactly what management hopes to do with the "China 2025 Plan" it announced in December, which calls for more than 50 all-new vehicles to be launched in China by the end of 2025. Among those planned vehicles are eight SUVs and 15 electrified vehicles, spanning both the Ford and Lincoln marques. The first of those launches will happen later this year. Ford also plans to invest in design and engineering at its new Nanjing test center, which opened in late 2017.

Ultimately, Ford needs to do well in China in both the near and long term, and it's saying all the right things with its China 2025 Plan. Now, it's just going to have to execute.