You know those new GM crossover SUVs? Turns out Chinese buyers like them, too.

General Motors (GM -2.18%) said that its sales in China increased 12.5% in November from a year ago, on a huge year-over-year jump in sales of SUVs driven by strong local demand for several all-new GM models.

Year to date, GM's sales in China are up 3.3% through November, outpacing the 1.9% increase for the overall passenger-car market in China over the same period. 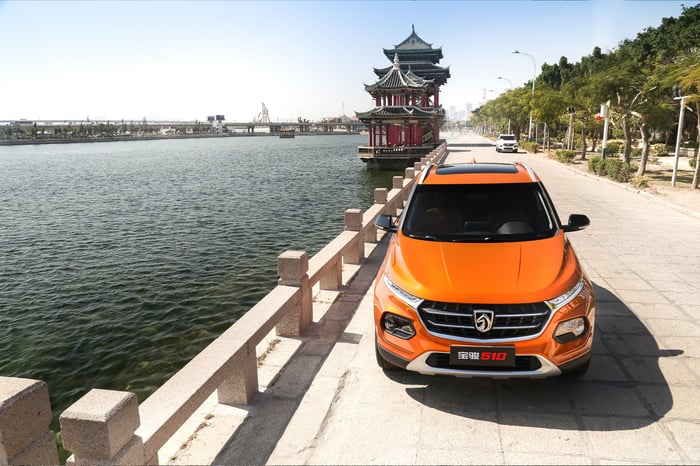 GM is fighting back against cheap SUVs from domestic Chinese automakers with the little Baojun 510, which has been selling in huge numbers. Image source: General Motors.

GM is outpacing the market, but so are key rivals

Here's how GM's sales results in China stacked up versus its key global competitors and the overall market in November and for the year to date.

Data sources: Chinese Association of Auto Manufacturers and the individual automakers. Sales totals include sales by affiliated joint ventures. Year-to-date figures are through November. Overall China market figures are for "passenger vehicles", which include cars, SUVs, and minivans, but not commercial vehicles.

Hyundai Motor Company (HYMTF -3.15%) China sales fell 25% in November in large part because of what the Chinese refer to as "patriotic feelings": Tensions between the Chinese and South Korean governments led buyers to shop elsewhere. Honda and Nissan were able to take advantage.

Meanwhile, Detroit rival Ford is struggling in China with a dated product lineup that's losing ground to (among others) the new GM crossover SUVs; the company announced a turnaround plan earlier this month that includes a slew of new models.

What is (and isn't) working for GM in China right now

Here's what is working for GM in China right now: SUVs, specifically GM's recently renewed lineup of fuel-efficient car-based crossover SUVs. Sales of GM's SUVs as a group were up 73% in November from a year ago.

Also working well for GM in China right now: High-profit luxury vehicles. Cadillac sales rose 23% in November from a year ago, a gain driven by the XT5 and good results for 3 Cadillac sedans: The high-end CT6, the big XTS, and the ATS-L, a China-only version of the compact ATS that has a longer wheelbase to provide more room in the back seat.

What isn't working? There wasn't much bad news in GM's November sales report. The Wuling brand, which is in the process of revamping its lineup as it transitions from small affordable commercial vans to (small and affordable) passenger vans, saw sales decline 6.3% in November to 121,566. But low-profit Wuling was the only GM brand to post a decline in China sales last month.

The upshot: GM is setting up another strong quarter in China

GM's equity income from its Chinese joint ventures has been strong in 2017, despite concerns about increased pressure on pricing from fast-improving domestic Chinese automakers. Through the first three quarters of 2017, GM has booked just under $1.5 billion in equity income from China, up $24 million from the same period in 2016.

The story through that period is pretty simple: Just as CFO Chuck Stevens predicted two years ago, GM has been able to offset pricing pressure at the lower end of the market with increased sales of premium and luxury vehicles. That story continued to play out last month, and it suggests that the fourth quarter is shaping up to be another solidly profitable one for GM in the world's largest new-vehicle market.