Ford's sales in China are down this year, and its profit is down further. Here's the turnaround plan.

Ford Motor Company (F 2.33%) said that it will launch "more than 50 new vehicles" in China by 2025, part of a plan to put it back on a profitable growth path in the world's largest new-car market.

Ford has been having a tough time in China this year. Sales are down 5% from a year ago, profits are slipping, and there has been a growing sense that Ford's product cycle isn't keeping up with China's fast-paced market.

CEO Jim Hackett has been working on a plan to turn that around. In a presentation in Shanghai on Tuesday, he and other senior Ford executives shared some of the details of that plan. Here's what we learned. 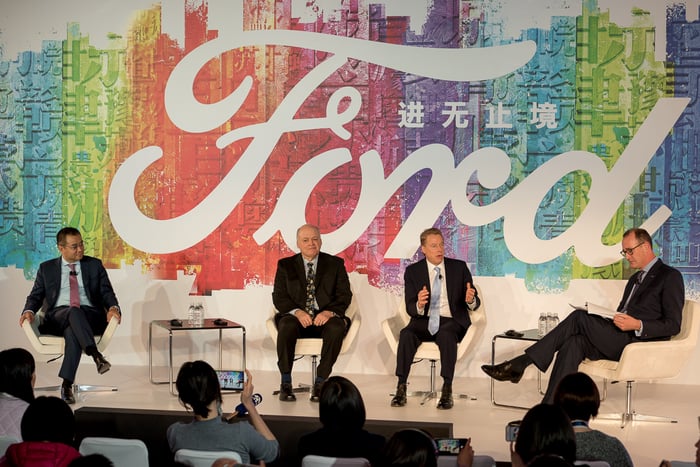 What Ford told us about its plan for China

Here are the key points of Ford's plan for China, as announced on Tuesday:

Ford also noted that it is a key participant in an open-source autonomous-vehicle development effort led by Chinese search engine giant Baidu (BIDU 3.10%), and will continue to contribute to that effort. Ford Everest SUVs roll off a production line in the Chinese city of Nanchang. Ford plans to add five vehicles to the list of products it manufactures locally in China. Image source: Ford Motor Company.

What it means: A very Hackett plan for China

The plan's emphasis on cost reductions and connectivity is very much in keeping with the broad direction set by Hackett since he took over as Ford's CEO in May. Here's what he said in a statement announcing the plan:

We are responding to the rapid pace of change by delivering increased connectivity and working to improve and simplify mobility for everyone. This builds on our commitment to deliver smart vehicles for a smart world, helping people around the world move more safely, confidently and freely.

From luxury Lincolns, to Ford cars and SUVs, to an all-new electric vehicle brand, we will meet the growing desire and need in China for great new energy vehicles. Each of them will be safe, efficient, fun to drive and backed by an ecosystem that makes charging, sharing and servicing easy.

One thing we should note: As with "electrified vehicles," Ford's definition of "new vehicles" can be expansive: It includes new trim lines and updates to existing models. Ford isn't planning to develop and launch "more than 50" new products from scratch.

(The time to take note is when Ford says "all-new": That really does mean new. Note that Ford did say it would have eight all-new SUVs for China. That will include some completely new models as well as next-generation versions of its existing models.)

The upshot: It's about Ford's bottom line

Simply put, Ford is planning to streamline and simplify its existing China operation while expanding its product line.

The stated goal is to boost Ford's China revenue by 50% from 2017 levels by 2025 And while it didn't say so, Hackett is probably targeting a larger percentage increase in profits.

Boosting Ford's China profits is becoming an urgent priority: Through the first three quarters of 2017, Ford's equity income from its China joint ventures was $710 million, down 33% from the same period a year ago. If Hackett and his team can turn that around, Ford's future in China will start to look a lot brighter.