Ford Motor Company (F 2.33%) has become a major player in the huge and growing Chinese new-car market. Ford and its joint ventures sold 1.27 million vehicles in China in 2016, and those joint ventures generated $1.44 billion in equity income for the Blue Oval.

Clearly, for Ford investors, tracking the company's results in China has become significant. But Ford's China results can be confusing, given that its sales in China include vehicles from two joint ventures as well as its own global production.

Here's a quick explanation of where Ford's vehicles in China come from and how the company reports the profits it makes from selling those vehicles in the world's largest auto market. 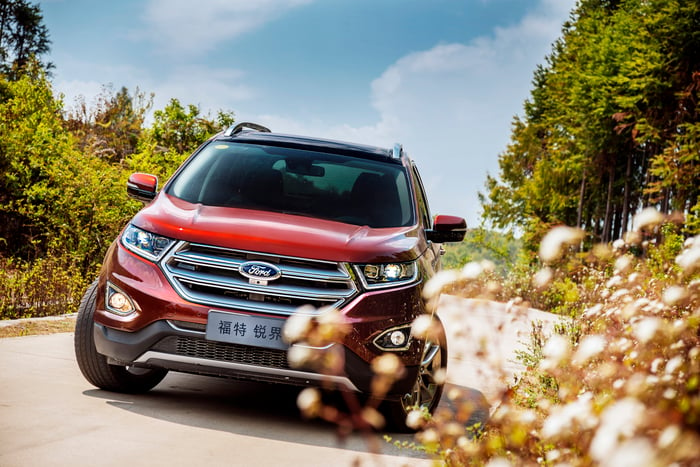 The majority of Ford's sales in China come from vehicles built by its joint venture with Chinese automaker Changan Automobile, called Changan Ford (or CAF for short). CAF builds Ford-brand passenger cars and SUVs. Most are familiar to Americans, though a couple have different names: The Kuga is the Chinese version of the Escape SUV, and the Mondeo is China's version of the Fusion.

Only two of CAF's models are China-only products:

Ford's second joint venture is with Chinese automaker Jiangling Motors, a company that focuses on trucks and commercial vehicles. The joint venture, called JMC, builds the Ford Transit vans, a truck-based SUV called the Everest, and a line of light trucks under the Yusheng and JMC brand names.

There might be a third Ford joint venture in China soon. In August, Ford entered a "memorandum of understanding" with Chinese automaker Anhui Zotye Automobile (commonly called Zotye Auto). The two are exploring the idea of a joint venture that would produce a new line of all-electric passenger vehicles to be sold under a new China-only brand. 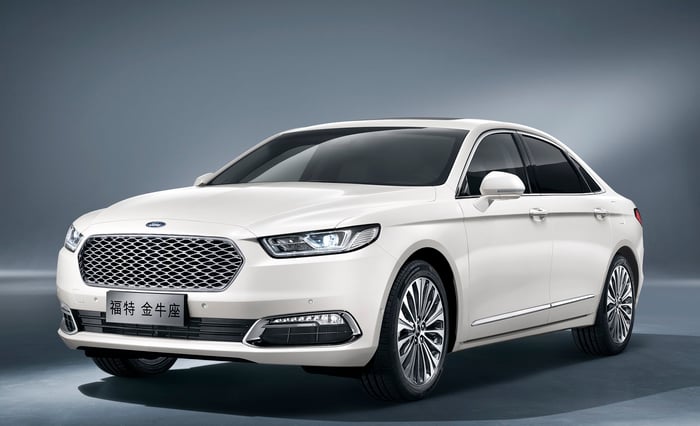 This big Ford sedan might not be familiar to Americans, but it wears a familiar badge: Taurus. Image source: Ford Motor Company.

Taxes on imported vehicles in China are fairly high; they're intended to encourage global automakers to build the majority of their China-market vehicles in the country.

But Ford finds it worthwhile to import some specialty models into China:

Ford also imports all of the Lincoln vehicles that it sells in China, though that may change at some point in the future. Lincoln offers five models in China through a network of dealers that emphasize a high level of personal service. Those include the MKZ and Continental sedans, and the MKC, MKX, and Navigator SUVs. Lincoln's sales totals in China are still fairly small, but they've grown quickly. 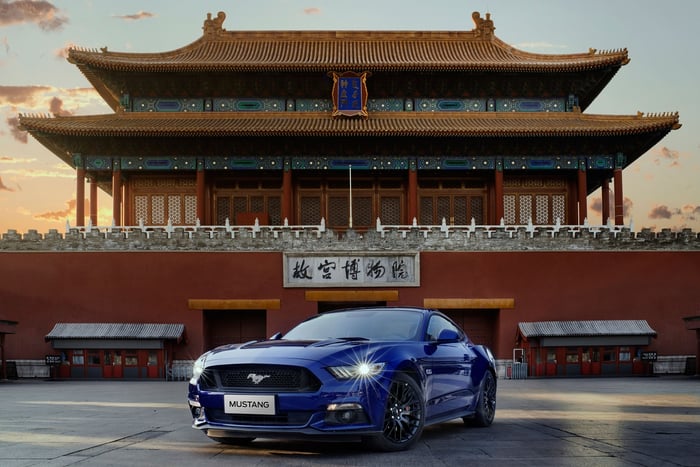 Ford now sells Mustangs in China. But unlike most Fords sold in China, Mustangs are imported: All Ford Mustangs are made in Michigan. Image source: Ford Motor Company.

How Ford reports its China sales and profits

Ford reports its sales in China monthly, generally around the tenth of the month, in a document that includes sales totals for all of its China-market models as well as some commentary from executives. You can find those reports in the "News and Events" section of Ford's site for shareholders.

Unfortunately for investors who like easy answers, Ford doesn't report one single bottom-line number for its operation in China. Financial results for China are rolled into the pretax results that Ford reports for its Asia-Pacific region as a whole. But since Ford is investing for growth (or put another way, losing money) in other parts of Asia right now, the profit total that Ford reports for Asia-Pacific only tells part of the China story.

But we can learn more by looking a little deeper, inside the slide presentation that Ford prepares for its quarterly earnings conference calls. Those presentations typically include two slides for the Asia-Pacific region; on the first, Ford has made a practice of calling out the equity income for its two Chinese joint ventures in a note on the right-hand side.

That's a number that can be compared directly to reports from some of Ford's competitors -- notably General Motors (GM 2.19%), which reports equity income for its own China joint ventures. That number plus the monthly sales reports are probably the best way for Ford shareholders in the U.S. to tell how the company is faring in China.