Please ensure Javascript is enabled for purposes of website accessibility
Log In Help Join The Motley Fool
Free Article Join Over 1 Million Premium Members And Get More In-Depth Stock Guidance and Research
By John Rosevear - Apr 26, 2015 at 8:09AM

It's a big and plush new Ford Taurus -- but it's not for Americans.

The 2016 Ford Taurus is a big sedan with a familiar face. It has a strong family resemblance to the midsize Fusion, but it's quite a bit larger, and the lines are a little more conservative.

Inside, it's quite luxurious, the latest example of Ford moving to give its models a more premium, upscale-ish feel. The back seat is especially generous, with plenty of legroom, seats that recline -- and even a separate set of climate controls. Power comes from Ford's 2.7 liter EcoBoost V6, which should give the new Taurus nice acceleration and good fuel economy.

It looks like just the kind of car that might tempt American SUV drivers back to a big sedan, doesn't it? But there's a surprising twist to this story: The new Taurus was designed just for China. Ford says it won't be sold here.

Sales of the U.S. Taurus have been flat for years
Here's what that's about: Americans aren't buying very many big mainstream sedans these days. Once upon a time, Ford's Taurus sedan was America's best-selling car, a very American midsize family sedan. But those days are gone.

In fact, Ford dropped the Taurus name from its lineup altogether for a while. But after Alan Mulally took over as Ford's CEO in 2006, he ordered the company to revive the name and use it -- this time, on Ford's biggest sedan.

The current Ford Taurus is one of Ford's oldest models. Big sedans are slow sellers these days, and the Taurus has been an especially slow seller lately. Right now, it's outclassed (and outsold) by the impressive Chevy Impala and a thoughtfully refreshed Dodge Charger.

Sales of the full-size Taurus have never come close to those of its midsize Fusion sibling, and they've been flat for years -- while Fusion sales have boomed. 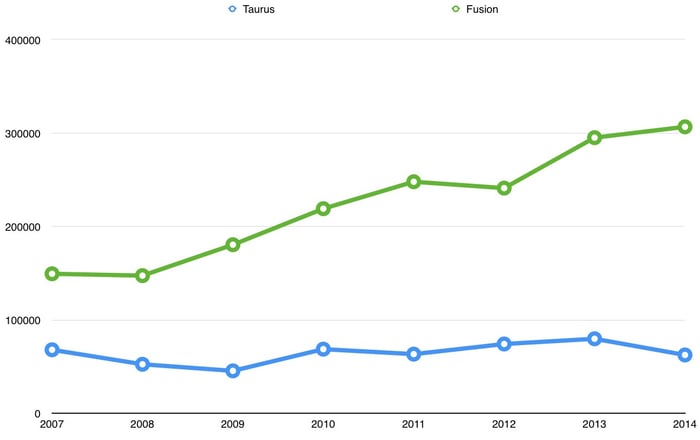 Apparently, Ford thinks it isn't worth bringing the new Taurus to America. But it sees a market niche for a big new sedan in China.

The new Taurus is aimed at a specific spot in China's auto market
Ford's current line-up has found a "sweet spot" in China's huge new-car market. At least in higher trim levels, Ford's current cars and SUVs offer a premium feel with lots of luxury features -- but they aren't ostentatious. There's a substantial segment of Chinese car buyers who like the idea of a luxurious-feeling car that doesn't shout "luxury car" from the outside, and the company's sales have boomed over the last few years. In fact, Ford has been building a bunch of new factories in China (it's up to six) to keep up with demand.

The Taurus is intended to give Ford's new Chinese customer base a top-of-the-line model that fits in with what the Chinese love about current Fords. In China, it's common for successful professionals to hire drivers so that they don't have to deal with urban traffic. Those folks prefer to ride in the back seat -- and that makes the back seat of a big car like the Taurus especially important.

The Lincoln Continental Concept is a close preview of the new Continental that will launch next year, Ford executives say. Source: Ford Motor Company.

Just as we saw on the Lincoln Continental Concept that Ford unveiled in New York earlier this month, the back seat of the Taurus has lots of legroom, seats that recline, and a long list of amenities. But unlike the Continental (which will be offered in both the U.S. and China, Ford says), the Taurus wraps that plush interior in a subdued, conservative-looking package.

The upshot: Ford would probably rather sell Americans a Lincoln Continental
All of that probably explains why Ford won't be selling this Taurus in America. Ford expects that Americans who want a plush, roomy car will like its new Lincoln Continental. But in China, where there are cultural reasons why some folks don't want to look flashy, the Taurus will be an important niche product.

It may not look like it, but the new Taurus is an example of Ford's global "One Ford" strategy in action. The new Taurus's underpinnings are almost certainly closely related to the Continental's (and to the Fusion's, too.) It may look like a unique model, but in reality, it probably didn't cost Ford a lot to create -- and it looks like a good bet to capture some profitable sales in the world's largest car market.