Please ensure Javascript is enabled for purposes of website accessibility
Log In Help Join The Motley Fool
Free Article Join Over 1 Million Premium Members And Get More In-Depth Stock Guidance and Research
By Rick Munarriz - Feb 22, 2018 at 10:28AM

The leading maker of modular carpet reports its headiest top-line growth in more than six years.

Double-digit growth is back at Interface (TILE 3.04%). The modular carpeting specialist posted financial results after Wednesday's market close, checking in with its strongest top-line gains in years. Net sales rose 11.1% to $266.2 million in the the fourth quarter. You have to go all the way back to 2011 to find the last time that Interface was growing faster.

Carpet tile is growing in popularity again as a flooring solution, and growth is accelerating. Interface clocked in with 3.7% growth in its previous quarter and 1.7% the period prior. Interface went through a cyclical rut before that, checking in with six consecutive quarters of year-over-year declines in net sales.

Organic sales rose 10.9%, as its decision to bow out of its FLOR retail business was more than offset by the recent launch of its luxury vinyl tile modular resilient flooring business. Organic orders -- adjusted for foreign exchange fluctuations -- climbed 8% during the quarter. 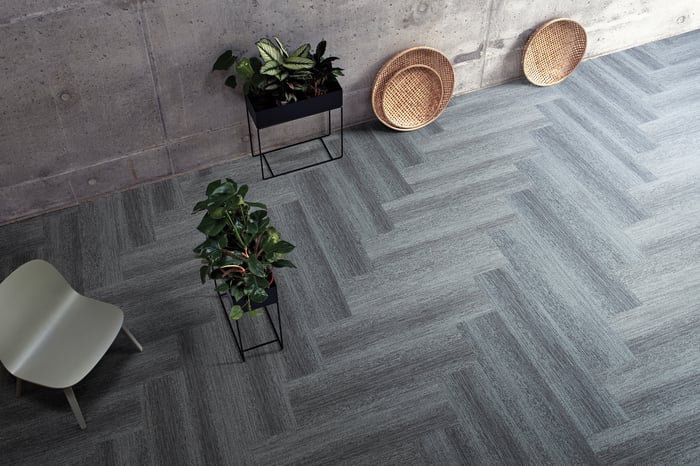 The news gets even better as we work our way down the income statement. Interface's profit of $0.07 a share for the fourth quarter was flat with its prior-year showing, but both periods were saddled with one-time hits. The big knock this time around was a $0.25 a share hit as a provisional tax expense following the enactment of the U.S. Tax Cuts and Jobs Act in December. Back out the charges to both quarters and adjusted earnings per share rose 14% to $0.32.

Gross margin widened slightly to 38.2%, as productivity initiatives more than made up for rising raw material costs. Interface's operating profit rose 16.8% during the period.

Interface is initiating its outlook for 2018. It sees revenue gains falling back into the single digits, but remaining positive. The carpet tile leader sees organic sales growth rising 3% to 5% with gross profit margin improving to between 39% and 39.5%. It sees flat SG&A expense growth. Interface doesn't offer quarterly outlooks, but it is reminding investors that historic seasonality finds it at its best in the second and third quarters. In other words, don't hold its current quarter's performance to its 2018 outlook.

The spike into double-digit revenue growth may prove temporary, but all signs point to improvement in the year ahead. Throw in Interface's penchant for eating its own cooking -- it invested $91.6 million in stock buybacks through 2017 -- and even modest improvements can translate into larger gains on a per-share basis.