Please ensure Javascript is enabled for purposes of website accessibility
Log In Help Join The Motley Fool
Free Article Join Over 1 Million Premium Members And Get More In-Depth Stock Guidance and Research
By Danny Vena - Feb 23, 2018 at 8:43AM

The U.S. isn't the only country with a booming artificial intelligence industry, and investors may be missing out on the potential for big gains.

While it's widely regarded as the leader in the field of artificial intelligence (AI), the United States isn't the only country producing advanced AI technology. China currently lags the U.S. in AI research, but the Middle Kingdom has announced to the world that it's no longer content to remain in the shadow of the West.

Last July, the government of China announced an ambitious policy regarding AI: close the gap with the U.S. in terms of AI research within three years and become the world leader in the field by 2030. The country has backed this initiative with action, beginning construction on a $2.1 billion facility dedicated to advancing AI research. The technology park will focus on numerous facets of AI, including big data, deep learning, biometrics, and cloud computing. 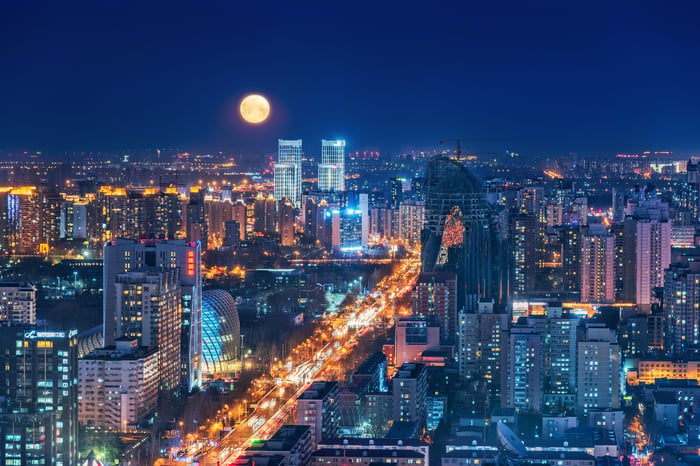 These AI companies have the blessing of the Chinese government. Image source: Getty Images.

Baidu is the internet search leader in the world's most populous country, but there is so much more in the company's tool kit. Taking a page from its U.S. counterpart, its AI program was developed by industry expert and Stanford University adjunct professor Andrew Ng. The noted AI researcher created the Baidu Brain, a neural network that has evolved into an ecosystem of 60 different AI technologies. The company has incorporated a number of AI-infused services for its users such as speech-to-text, translation services, and customized restaurant and retail recommendations. Baidu's voice-recognition efforts, called Deep Speech, has reached an accuracy rate of more than 97%.

The company is also China's leader in self-driving technology, developing an open platform known as Apollo. The autonomous-driving program now boasts more than 80 partners, and the Chinese government has recognized Baidu as the national champion in this field. It plans to achieve Level 4 autonomy and be mass-producing self-driving cars by 2021.

Alibaba is one of the world's largest e-commerce providers, but it's been increasingly branching out into AI. The company uses the technology to make product recommendations, provide customer service, and optimize delivery routes. Alibaba's ET Brain offers a number of cloud-based AI services geared toward medical applications, the optimization of airport management, and the development of smart-city services -- the task tied to its recent government mandate.

The company offers a service called City Brain, which gathers information from video feeds and social media in a municipality and uses a combination of big data and AI to help cities run more efficiently. The output generated can help identify and alleviate traffic congestion, direct emergency services, and assist in city planning efforts.

Alibaba also recently revealed that its neural network had achieved a higher score than its human counterparts in a test that gauges reading comprehension. The company says this is the first time this feat has been achieved.

The e-commerce giant continues to grow at a rapid pace. In its most recent quarter, revenue of $12.76 billion marked 56% year-over-year growth, led by its cloud computing segment, which more than doubled from the prior-year quarter. Its net income of $3.59 billion increased 36% year over year as the company invests in new technology such as cloud computing and AI.

While U.S. customers rely on a variety of apps for specific uses, Tencent's WeChat is the most frequently used app in China and serves multiple purposes as a messaging app, social-media site, payments service, gaming platform, and dating app.

The company is also the world's largest video game publisher, which may give Tencent an edge in the realm of computer vision -- its task on China's national champion team -- which will use the technology for medical diagnosis. The company took the top spot in a task that combines natural language processing and computer vision to generate descriptions of images.

It's important to note that while Tencent is a late entrant to AI research, it has made significant gains in the field. Its FineArt AI system defeated a number of the world's other top AI systems in Japan recently in a showdown involving the ancient Chinese strategy game of Go. Mastery of the complex game was first achieved by DeepMind, a division of Alphabet Inc.'s (GOOGL 4.20%) (GOOG 4.16%) AlphaGo AI, which defeated the top players in the world last year.

In its 2017 third quarter, Tencent produced revenue of 65.2 billion yuan, up 61% year over year, while its net income of 18 billion yuan marked 69% year-over-year growth.

A recent study reveals that China's ambitious pronouncement isn't just hyperbole. While the number of published academic papers from Chinese researchers is growing, submissions from U.S. authors are on the decline, according to a recent study from economists at the University of Toronto.

The researchers studied the number of presentations made to the Association for the Advancement of Artificial Intelligence, an annual conference to share advancements in the field. The number of papers from Chinese authors increased to 23% of the total, up from just 10% five years prior -- and second only to the United States. At the same time, presentations from U.S. authors fell to 34%, down from 41% in 2012.

China's push for AI dominance presents an opportunity for investors to benefit by investing in some of the leaders in the field -- particularly those they might not otherwise consider.